Newman, who was born in Mississippi but raised in St. Louis, said he was 5 years old when he got hooked on flying.

“They had a big parade for Charles Lindbergh,” Newman said in a 2002 Post-Dispatch interview. “When he flew across the (Atlantic) Ocean, he was the first man to solo. I was impressed by the way that airplane flew. That is when I got impressed about airplanes.”

Before joining the Army, Newman routinely spent nearly half of his $14-a-week pay as an elevator operator to take private flying lessons. Newman enlisted in the Army Air Corps, and was sent to Tuskegee Army Air Field, Ala., for flight training. He graduated on Oct. 1, 1943.

“That was the first thing in my life that I really, really wanted to do,” Newman said in a 2006 documentary. “I almost washed out in the beginning and it scared me to death, but I made it. But my determination to make it … I put everything I had into it because, golly, our class started with 72 in it and we graduated 23.”

On his 24th mission, Lt. Newman was forced to crash-land his plane. The P-39 caught on fire, trapping Newman inside.

“I thought I was dead,” Newman said in the documentary. “until I heard a guy say, ‘Spray it here.’ And the firefighters would come up and put foam on it. I rolled the window down and said, ‘Get me out of here!’

“He said wait, and I saw what he was saying — don’t come out of the window. Out the window I came and I got stuck. And then I just kicked, and the door broke off and I was laying on the wing, door around my waist and they pulled me out of the fire. I was in the hospital two and a half months.” 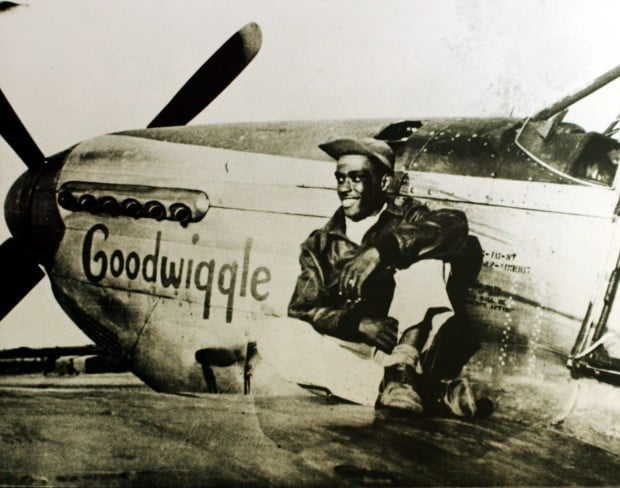 “Everything was going through my mind,” Newman said in 2002. “It was a life-threatening emergency. When I was coming down in the chute, I was bleeding. My plane was shot down. … I had a one-man rubber dinghy. It was a summer day. It was just a matter of waiting. I could see airplanes flying over. I was out there for six hours.”

By the end of the war, Newman had completed 84 missions. He flew another 97 combat missions in the Korean War. After leaving the military, Newman worked as a U.S. postal clerk, then the Defense Mapping Agency.

According to his own accounts and notes, Newman was awarded a Distinguished Flying Cross, an Air Medal with eight oak leaf clusters (five from World War II), and a Purple Heart for his military service.

“I learned a lot and I got a few scars, but I was glad that I did it,” Newman said in the documentary of his World War II experience. “I didn’t regret it at all, even though I did have a hard time on occasion.”

In March 2007, President Bush bestowed the Congressional Gold Medal on the Tuskegee Airmen. Each Airman received a bronze replica of the medal, the gold medal is on display at the Smithsonian Institution in Washington.

In July 2007 the Lambert Airport honored African American pilots who broke color barriers in the sky with a re-dedication of its mural “Black Americans in Flight.” 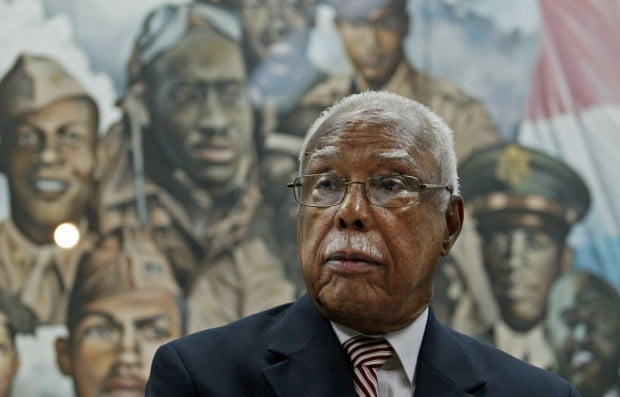 Capt Newman sits in front of a mural at the Lambert International Airport that honors the service of black Americans in the military. Newman was at the ceremony on July 21, 2007 honoring the Tuskegee Airmen

Solomon Thurman, one of the mural’s co-artists, said the five-panel mural depicts the aviation achievements of African Americans from WWI to the NASA shuttle mission.

“St. Louis is the only place where you can see an encapsulated story of the Tuskegee Airmen,” he said. “There are many Tuskegee paintings around the country and perhaps around the world, but none tell the cohesive story.”

Newman’s portrait appears on the mural’s fourth panel, which is dedicated to St. Louis pilots who flew during WWII. The mural was first dedicated in 1990.