Lt. Col. Clarence C. Jamison was a pioneering Tuskegee Airman, with 22-years of military service during and after World War II. His journey from Little Rock, Arkansas to Anzio, Italy and to Korea is one of historic firsts and heroic accomplishments.

Born in Little Rock on February 25, 1918, Clarence would live in a home that included his grandparents Edward and Callie Stewart, his parents Richard and Sallie, and his older brothers Sterling and Thurston. The family would grow over time to include Clarence’s younger sister Rae and brothers Alvin and Richard. When Clarence was five, his parents and older siblings moved to Cleveland, Ohio, setting up a new home for the remaining family left in Little Rock. By 1924, the Jamison’s were reunited and settled together in their 85th Street home, now with two uncles and a border joining the family. Clarence’s father Richard took care of his family through work as an order clerk for a wholesale drug store.

It was in Cleveland that Clarence began his schooling, first graduating from Bolton Elementary School and then Central High School. With an interest in medicine and an eye towards a career in that field, Clarence applied to and was accepted at the University of Chicago where he studied medical bacteriology. His excellent grades earned him a place in the Iota Chapter of Kappa Alpha Psi, Inc. fraternity. Established in 1918, the historic fraternity was for high achieving African American students. To help pay for school, Clarence worked as a bookkeeping machine operator.

While living in Chicago with an uncle and attending University of Chicago, Clarence learned about the United States Government sponsored Civilian Pilot Training Program, run under the auspices of General Henry H. “Hap” Arnold. The idea of the CPTP was to ready a supply of civilian pilots by offering free flight school training and licensing in case aviators were needed as American involvement with World War II became more of a possibility. Clarence completed his 72 hours of ground training and 50 hours of flight training, earning his civilian pilot’s license during 1940.

Clarence learned about the formation of the first African American squadron being formed by the United States Army Air Force. Realizing that the program offered the opportunity for Clarence to serve as an officer, he applied to the Tuskegee Army Air Field training program. After hearing nothing about his application status, Clarence wrote a personal letter to First Lady of the United States Eleanor Roosevelt who had been a vocal supporter of the cause. While Clarence never received a direct letter back, five weeks after writing to Mrs. Roosevelt, he was accepted into the Tuskegee program and believed with certainty that the First Lady had intervened on his behalf. He was accepted as a cadet and enlisted on August 21, 1941.

April 1942 would be an eventful month for Clarence. On April 18, 1942, he married Phyllis Louise Piersawl, and the couple would be married for 53 years until Phyllis’ death, and they had a daughter named Michal and son Clarence, Jr.

Eleven days later, on April 29, 1942, Clarence graduated from the Tuskegee Army Air Field. His class, SE-42-D, was only the second class to graduate the program. Of the 13 men who started with his class, only 3 would graduate: Sidney P. Brooks, Charles W. Dryden, and Clarence Jamison.  Despite being ready to serve, it would take several more classes of graduates before the 99th Fighter Squadron had the prerequisite number of pilots to officially form. During the wait, the pilots continued to train and prepare. 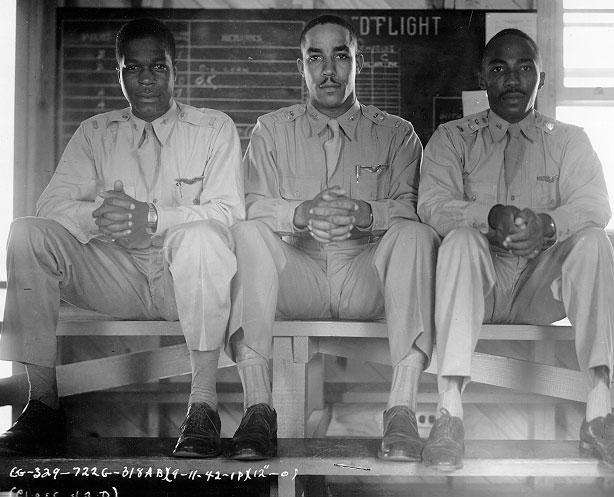 Finally, during April of 1943, the 99th Fighter Squadron, including then Captain Jamison, went to North Africa and would fly the first ever combat mission with African American pilots on June 2, 1943. The mission was the liberation of the Pantelleria Island from the German Army. Its success was a victory both for the Allied efforts abroad and the beginnings of the modern Civil Rights Era in America.

Captain Jamison would fly 67 combat missions, with perhaps the most harrowing being the time when his squadron came under fire from 22 German planes in a battle over the skies of Anzio, Italy. While flying at speed of more than 275 miles an hour at tree-top level, the gun of Captain Jamison’s P-40 Warhawk fighter plane jammed with four enemy planes firing upon him. After leading the enemy fighters on a chase, his P-40’s engine was finally hit by fire and Lt. Col. Jamison was forced to crash on the Anzio beachhead, amazingly unhurt. With Captain Jamison’s leadership, and despite the 99th being outnumbered 2-to-1, the Americans completed the mission.

Upon his return to the United States, Captain Jamison continued to serve in the military. During August 1944, he partook in a ceremony at the Tuskegee Army Air Field celebrating the third anniversary of the beginning of the program. The celebration was broadcast on NBC radio and featured Major General William O. Butler, Commanding General of the Eastern Flying Training Command.

Clarence Jamison retired from the military in 1963 with the rank of Lt. Colonel including service during the Korean War. His finance and accounting experience he learned during his post-World War II military career was put to good use for another 23 years, with Lt. Col. Jamison eventually retiring from a career at the Social Security Administration.

Further examples of his continuing belief in service were his years with the Kiwanis Club and as a board member of the senior care facility Eliza Bryant Village.

Lt. Col. Jamison earned many awards for his pioneering service, including the Air Medal with seven oak leaf clusters. During 2006, he was awarded an honorary Doctor of Public Service by Tuskegee University. About a year later, on March 29, 2007, President George W. Bush collectively awarded the Tuskegee Airmen the Congressional Gold Medal. (The Airmen received bronze replicas of the medal, the original gold medal is on display at the Smithsonian.) He was invited to attend the January 20, 2009, inauguration of President Barack H. Obama as a special guest. On September 6, 2011, Lt. Col. Jamison was given the key to the City of Cleveland.

Lt. Col. Jamison passed away on March 6, 2014, in the town he grew up in, Cleveland, Ohio. He was 96 years old. He is buried in Arlington National Cemetery. His story is told in the book Memories from Tuskegee: The Life Story of Lieutenant Colonel Clarence C. Jamison as told to James Christ and the program Another Look has a half-hour interview with Lt. Col. Jamison available for viewing (links below). A genuine pioneer and American hero, Lt. Col. Jamison fought for liberty at home and abroad, and his life was a life of “firsts” and barriers successfully broken.