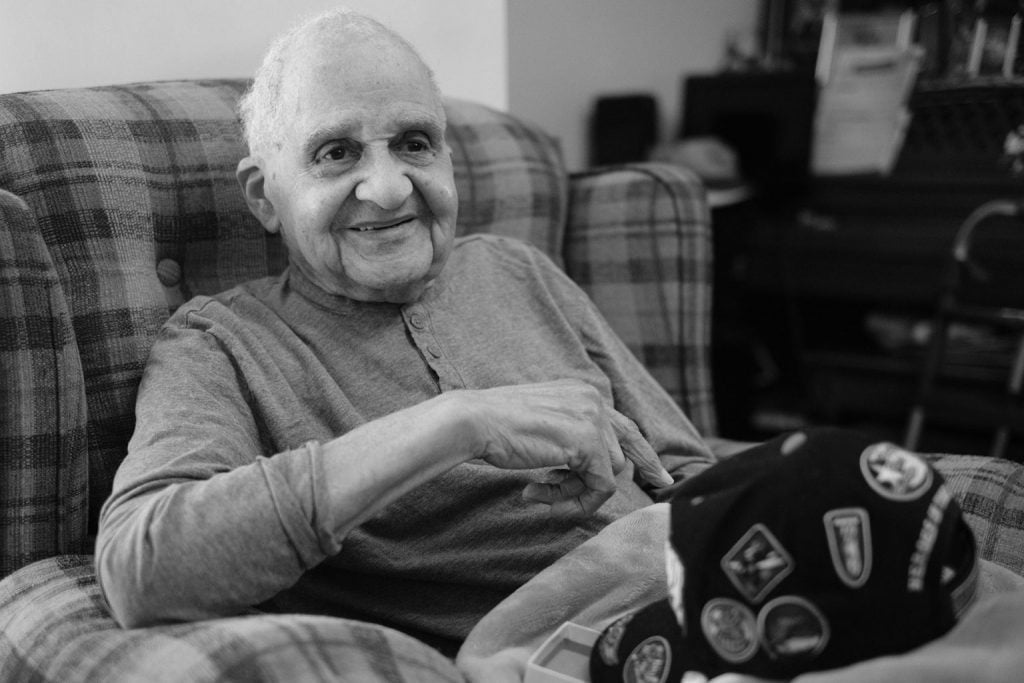 You can trust a secret to Clifton E. Brooks Sr.

Information that Clifton decoded back in the 1940s remains known only to Clifton, a resident of the county seat of Mineral County, Keyser, and West Virginia’s last surviving Tuskegee Airman.

Clifton is getting up there in years; he was 97 when I visited him in the spring of 2019. He has some memory lapses, but one suspects that if he were placed in front of a US Army SIGABA machine, Clifton could still operate the keys and lever that enabled cryptologists to do their vital work during World War II. Indeed, both the machines and the personnel who operated them were so discrete in their duties, the US code was never broken. Even after the war, Clifton was so secretive about his wartime work, it has been only in the last decade or so that the full story of his military service became known to his eight children.

“He never talked about him being a cryptologist during the war,” his son, Mickey “Mick” Brooks, told me. “He would tell me nothing about what he did. When Dad was told a secret, he kept it a secret.”

As far as Mick and his other siblings knew, their father was a mechanic in the Army Air Corps during World War II. It was only after the movie “Top Guns in the Sky” and accompanying media coverage brought attention these airmen that Clifton confirmed his participation in that select group and cautiously shared his story. Mick and his siblings worked with West Virginia congressmen to secure the recognition his father deserved, including a bronze replica of Tuskegee Airmen Congressional Medal received by Clifton and his children: Jacque Washington, Apryl Smith, and Mickey, Clifton E. Jr., Rick, Victoria, Brenda and Tim Brooks.

The airmen were “the men and women, African Americans and Caucasians, who were involved in the so-called ‘Tuskegee Experience,’ the Army Air Corps program to train African Americans to fly and maintain combat aircraft”. The airmen of the “experience” included pilots, navigators, bombardiers, and maintenance and support staff such as Clifton. His late brother, James, also was an airman and flew in a fighter group.

Prior to 1940, African-Americans were barred from flying for the US military, and it was only through the pressure exerted by civil rights groups and the black press that the all African-American squadron was formed in 1941. Cadets lived on the Tuskegee Institute campus and trained at Moton Field in Tuskegee, Alabama.

As the nation’s first black military pilots and support personnel, they both proved their capabilities and helped the Allies win the war. There were 992 black pilots who were Tuskegee Airmen; the first wave of them were assigned to the 99th Fighter Squadron, which deployed to North Africa during April 1943 and flew its first combat mission June 2, 1943.

The 332nd Fighter Group was the first black flying group. It was activated at Tuskegee Army Air Field on Oct. 13, 1942, and included the 100th, 301st and 302nd Fighter Squadrons. Clifton was a member of the 332nd, which deployed from Michigan to the mainland of Italy between Dec. 22, 1943 and Feb. 3, 1944. Their missions included patrolling shipping lanes in the Mediterranean Sea, supporting ground forces in Italy and escorting bombers. All told, the Tuskegee Airmen flew 1,491 missions.

Very little memorabilia and paper has survived from Clifton Brook’s WWII years. This worn photo is among the few artifacts. 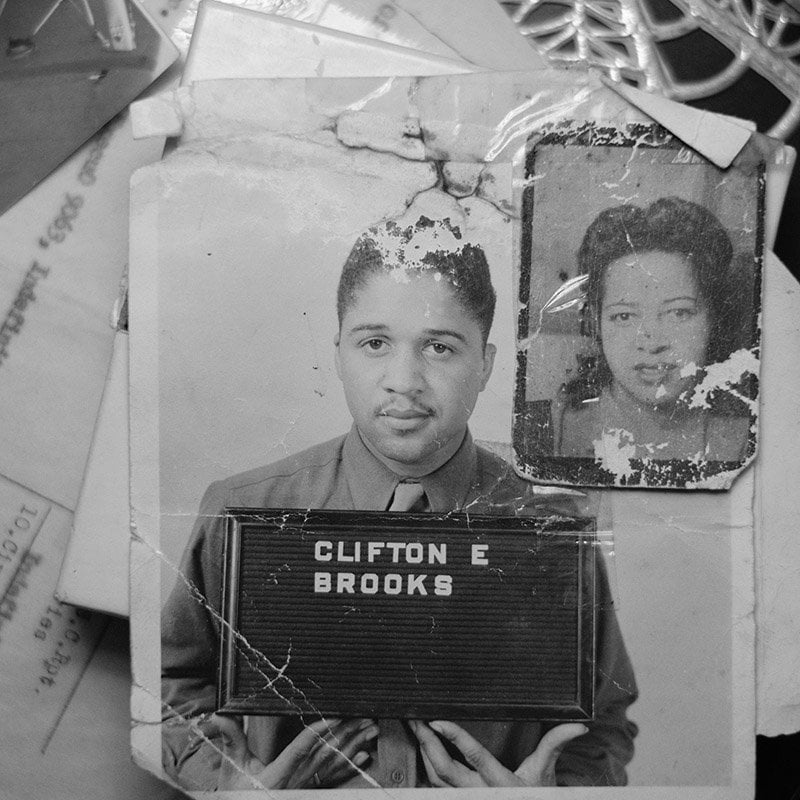 Clifton, born March 22, 1912, enlisted September 28, 1942, at Charleston, where he was a student at West Virginia State College. Mick says his grandmother, Nellie, had saved money so his father and Uncle James could get a higher education. Mick says education was a family value for the Brooks, who had both teachers and pastors in their ranks.

Mick says his father never shared with him what his career plans were after college. Mick just knows the story of his enlistment, which Clifton shared with me during a visit at a family member’s home.

“Here comes this man to see me,” Clifton says. “He asked, “Are you Clifton Brooks Sr.? If you are Clifton Brooks Sr., you are the man the government is looking for. Now don’t you try to get away. You need to go with us.’”

Clifton says he wrapped up his work at school and let his mother know that he was joining the Army because he had the skills the government needed. He and James stayed together throughout the war years. “Wherever he went, I went,” Clifton says.

Mick says that while his father did not speak of the work he did during the war, he did talk about the discrimination and segregation the airmen experienced, including “colored” facilities in Alabama.

“One time he went to town in a bus and had to walk back to the base because he was not allowed to get on the bus (with the white passengers),” Mick says. “He also told about how the black officers were treated and were not allowed to use the same mess hall as the white officers.”

Clifton returned to the United States Oct. 17, 1945, and, after being discharged from the Army, came back to Keyser and married Bessie Reva, who’d been his classmate at the segregated Howard High School in Piedmont. Clifton graduated in 1940 and Bessie in 1942. Mick says his mother was widowed during the war, and his father and she married in 1947 or ’48.

Mick’s Uncle James, who was a pilot with the Tuskegee Airmen, joined the US Navy and lived in Portsmouth, Va. He is deceased.

Clifton chose marriage over completing his college degree and got a job with Kelly Springfield in Cumberland, Maryland, as a tire builder. He worked there four decades and was a quality control worker when he retired in 1982. His employer named him the company’s “Man of the Year.”

The couple raised their eight children in a modest home on Locust Street, across the highway from South End Park. Mick says the park was simply a corn field when he was growing up and the entire neighborhood was farms. It is now all residential and commercial.

“We grew up in that park,” Mick says. “It had a pool, and I spent almost every day down there. There was an airfield right next to the park, and the planes would fly over it.”

To circumvent their mother’s rule that they were not to cross the highway to get to the park, the children crawled through the culvert under the road to reach the recreation spot, which now bears the family’s name.

Mick says the family had a tradition of vacationing at Atlantic City, where an aunt lived and provided lodging.  even in those relaxed times on the boardwalk and beach, Clifton didn’t share his war stories. Indeed, unknown to his family, during those post-war years, government employees were monitoring Clifton’s associations to determine if Clifton was sharing cryptology secrets he’d acquired during his time in the Army. The secrets were safe with Clifton E. Brooks Sr.

The fact that he was a World War veteran was no secret, however. Even before retirement, Clifton gave freely of his time to the American Legion’s Washington Smith Post 152, of which he served as post commander and district chaplain. He’s been a member 72 years. Clifton also served as treasurer and lay speaker of his church, Janes United Methodist, and was a Mason and past grand master of Potomac Lodge 41. He was often called upon to speak at Memorial Day services and to school children during Black History Month. On Martin Luther King Day, Clifton recited King’s “I Have a Dream”
speech wherever he was invited to speak.

“He stayed busy all the time,” Mick says.

Once the full story of his service with Tuskegee Airmen was known by the family and community, Clifton kept busy sharing that aspect of his life, as well. Mick says one of the most memorable stories that his father shared was of having a bomb and suicide pills in his room where the cryptology work was performed. If the base were overrun by the enemy, he was to use the incendiary bomb to destroy the machine and associated documents, then consume the suicide pill so he could not be captured alive. 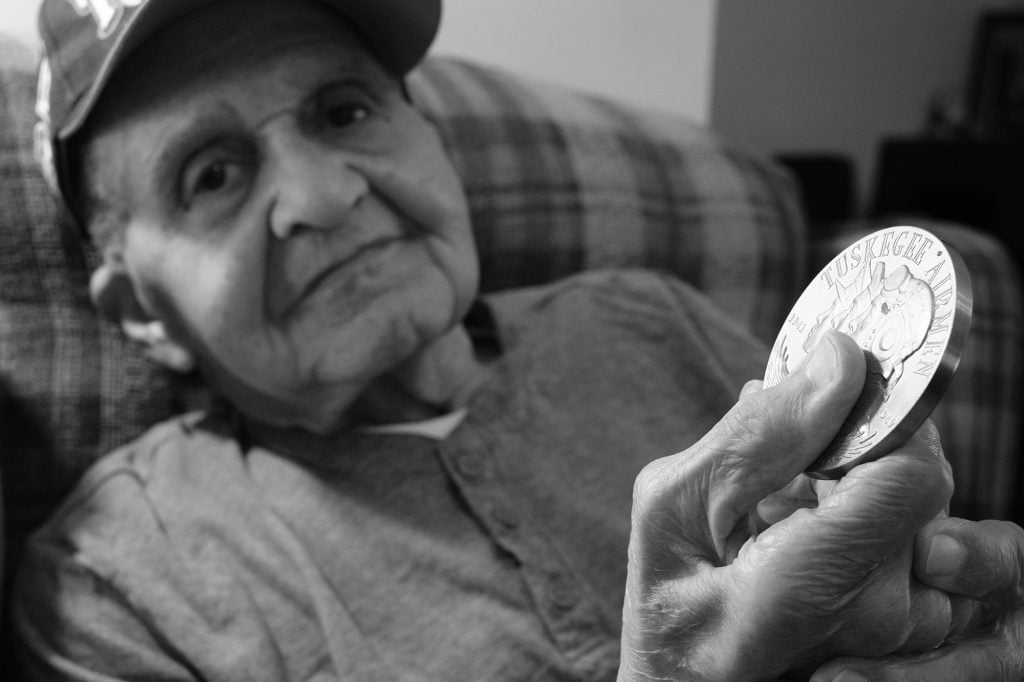 In April 2006 the US Congress voted to award a Congressional Gold Medal to the approximately 350 surviving Tuskegee Airmen or their widows. A bronze replica was presented to Clifton in 2010. His receipt of that honor drew community recognition that led to the park and the bridge being named in his honor. TJ Coleman of the Aubrey Steward Project spearheaded the effort.

“Don’t wait until people pass to recognize them,” Coleman told Elaine Blaisdell of the Cumberland Times-News in September 2018. “Let’s do this while we can so he can appreciate it.”

The Brooks children grew up playing in South End Park, which was named in honor of Clifton Brooks. His son, Mick, stands at the new sign in the spring of 2019.

On November 26, 2018, the sign designating Keyser’s South End Park as Brooks Park was unveiled. Clifton attended the ceremony, at which Keyser mayor Damon Tillman declared, “Today is a great day for the City of Keyser. It is a day we as a city can give back to a hero,” reported Liz Beavers of the Mineral Daily News Tribune. “Finally, we get to give back to somebody who is so deserving.” 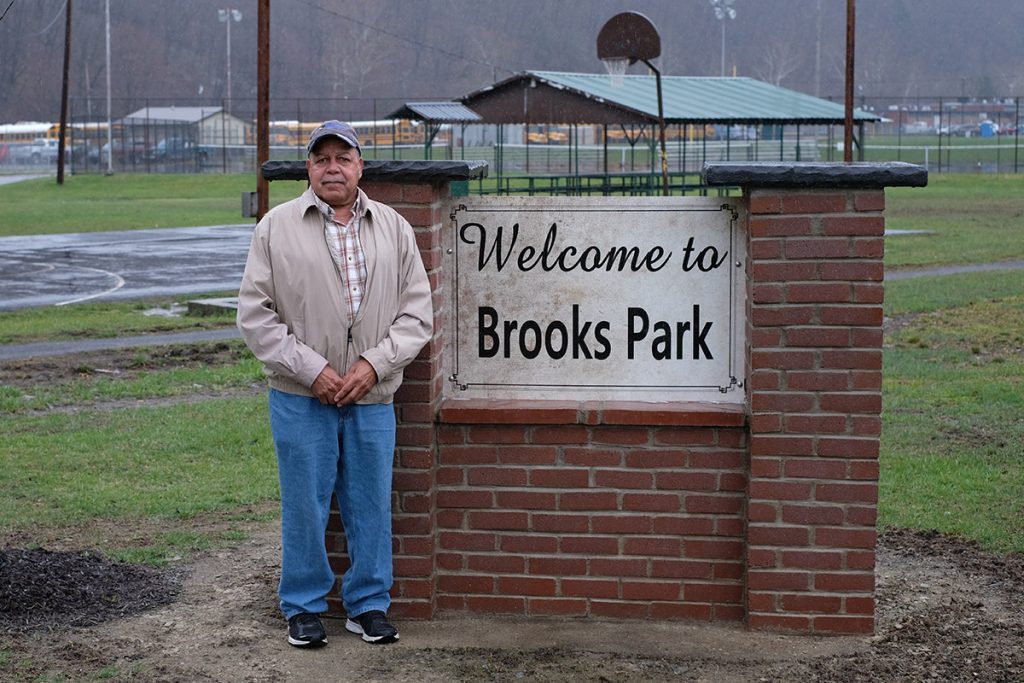 “Mr. Brooks, when everyone comes across that bridge, it will be your face they see,” Coleman told Clifton at the November ceremony.

It is a kind face. A face that smiles often yet conceals secrets; a face full of stories that will never be shared. Every question about his service is answered with his anecdote about the man coming to the West Virginia State College in September 1942 and looking for Clifton E. Brooks Sr.

So, I ask Clifton what the other men who served with him would tell me about him, and he says, “If you go that way, I guarantee that they will know Clifton Brooks,” and falls silent. I ask him what he thinks of all the attention he’s received, and Clifton looks around the room and says in a soft but strong voice that he is humbled to “see you all sitting here to find out something about me, to see a white man coming here and looking for a black man boy like me,” perhaps not still not able to comprehend just how far these airmen’s flights have taken us in our battles both overseas and at home.

Sources:
Special thanks to Carl Feather of “The Feather Cottage” for use of his article “Visiting with West Virginia’s last living Tuskegee Airman“ and to T.J. Coleman for introducing us to the legacy of Clifton Brooks!