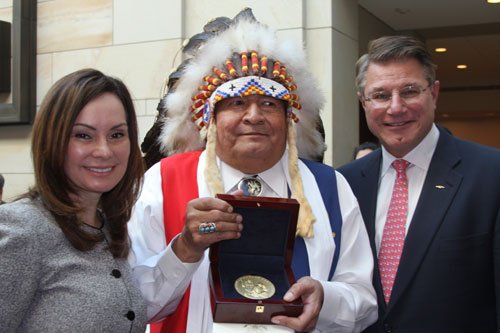 On November 20, 2013, in Emancipation Hall at the U.S. Capitol, 33 tribes were recognized for the dedication and valor of Native American code talkers to the U.S. Armed Services during World Wars I and II. Of the tribes recognized, 25 were presented with their Congressional Gold Medals.

The term “Code Talkers” refers to Native Americans who used their tribal languages as a means of secret communication during wartime. Navajo Code Talkers were previously honored with a Congressional Gold Medal authorized by an Act of Congress passed in 2000. Under the Code Talkers Recognition Act of 2008 (Public Law 110-420), other tribes with members who served as Code Talkers during a foreign conflict in which the United States was involved were to be similarly honored. The Department of Defense identified an additional 33 eligible tribes for which the United States Mint was authorized to prepare and strike a gold medal with a unique design.

Following the ceremony for the Tuskegee Airmen, the original Congressional Gold Medal was taken to the Smithsonian Institution, Air and Space Museum. It was later transferred to the National African-American Museum, where it currently sits. Each Tuskegee Airman received a smaller version of the medal to keep. 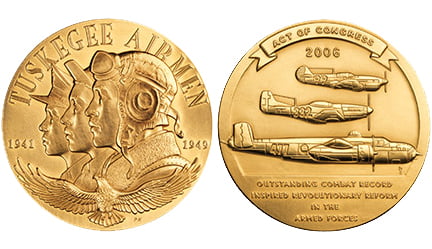 Here’s the description of the medal from the US Mint’s website:

THE OBVERSE The Men: This medal honors the Tuskegee Airmen, a group of African-American pilots who flew for the United States Army Air Corps during World War II. Their unique military record inspired revolutionary reform in the Armed Forces.

THE REVERSE The Medal: The obverse design features three Tuskegee Airmen in profile. Their headgear designates them as an officer, a mechanic, and a pilot. Below these busts, an eagle flies with wings outstretched, symbolizing flight, nobility, and the highest ideals of the Nation. The inscriptions are “Tuskegee Airmen,” “1941,” and “1949.” The reverse design features the three types of planes the Tuskegee Airmen flew in World War II, based on a logo design of the Tuskegee Airmen, Inc. The planes depicted in the design are the P-40, the P-51, and the B-25. The inscriptions are “2006,” “Act of Congress,” and “Outstanding combat record inspired revolutionary reform in the armed forces.”

Following the ceremony for the WASP, the original medal was donated to the Smithsonian Institution for display with the “Women in Aviation” display at its Udvar-Hazy Center in Chantilly, Virginia. Each WASP received a smaller version of the medal to keep.

THE OBVERSE:  Depicts the portrait of a WASP with three pilots in the foreground in flight uniforms walking toward their aircraft.  The clean lines of the edge are strategically broken by the aircraft, the pilot, and the feet of the women pilots ‘crossing the boundaries’ and ‘breaking thru the barrier’ of the edge.

The AT-6 on this design, indicated by the number 264, represents the North America AT-6 “Texan” advanced trainer flown by pilots who went through Army Air Forces flight training. EVERY pilot had to master the AT-6 before graduating.

THE REVERSE:  Features the three aircraft that are symbolic of the many types of airplanes flown by WASP:  trainers, fighters, and bombers.

The AT-6  on this design, indicated by the number 264, is flying in formation and represents aircraft flown by WASP across America as engineering test pilots and other missions critical to the training of Army Air Forces pilots during World War II.

The P-51  “Mustang” was the fastest fighter aircraft in the Army Air Forces’  arsenal and represents the FERRY COMMAND.

The B-26  (Martin Marauder), indicated by the number 967, represents the TRAINING COMMAND  and  bomber pilots.  WASP flew this twin-engine bomber initially as an experiment to prove to the male pilots that the plane was safe to fly, and then as a tow target aircraft for air- to-air target practice to train gunners for combat.

The WASP wings are depicted at the base of the design.

The inscriptions are: ‘THE FIRST WOMEN IN HISTORY TO FLY AMERICAN MILITARY AIRCRAFT’   and ‘ ACT OF CONGRESS,  2009’.

It was designed and sculpted by U.S. Mint Sculptor-Engraver Don Everhart