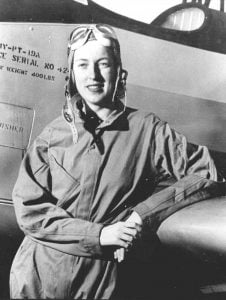 While we were standing at attention a bomber took off followed, by four fighters.  We knew the bomber was headed across the ocean and that the fighters were going to escort it part of the way.  As they circled over us, I could hardly see them for the tears in my eyes.  It was striking symbolism and I think all of us felt it.  As long as our planes fly overhead the skies of America are free and that’s what all of us everywhere are fighting for.  And that we, in a very small way, are being allowed to help keep that sky free is the most beautiful thing I have ever known.

I, for one, am profoundly grateful that my one talent, my only knowledge, flying, happens to be of use to my country when it is needed.  That’s all the luck I ever hope to have.

Cornelia Clark Fort was a United States aviator who became famous for being part of two aviation-related events. The first occurred while conducting a civilian training flight at Pearl Harbor on December 7, 1941 when she was the first United States pilot to encounter the Japanese air fleet during the Attack on Pearl Harbor. She and her student narrowly escaped a mid-air collision with the Japanese aircraft and a strafing attack after making an emergency landing.

The following year, Fort became the second member of what was to become the Women Airforce Service Pilots or WASP. Cornelia was working as a WASP ferry pilot on 21 March 1943 when she became the first female pilot in American history to die on active duty. She was involved in a mid-air collision and crashed ten miles south of Merkel, Texas in Mulberry Canyon, Texas.

Fort was born to a wealthy and prominent Nashville, Tennessee, family; her father, Rufus Elijah Fort, was a founder of National Life and Accident Insurance Company. She received a high school certificate from the Ward-Belmont School in 1936. She graduated from Sarah Lawrence College in 1939. After college, Fort joined the Junior League of Nashville. She showed an early interest in flying, ultimately training for and earning her pilot’s license in Nashville, TN. She was the second woman in Tennessee to get her commercial license and the first woman in Tennessee to get her instructors’ license. She applied to many flying schools and was accepted in Colorado. While there she was offered a position in Hawaii which she accepted

While working as a civilian pilot instructor at Pearl Harbor. December 7, 1941 was supposed to be beautiful Sunday morning in Oahu, Hawaii. It was just after 8am and

Cornelia Fort, a 22-year-old Nashville debutante who left polite society to pursue her dream as a flying instructor, was already in the air with a student when she noticed another airplane headed fast and straight in her direction.

Cornelia jammed the throttle open and forced her plane upward – narrowly escaping collision as she recognized the Japanese flag emblazoned on the wings of the other craft. Stunned, she looked back at the harbor now engulfed in a column of smoke. In front of her she saw dozens of fighter planes in formation moving through the cloudless sky. Her eyes followed a shiny silver device detach from an airplane, and her ‘heart turned convulsively when the bomb exploded in the middle of the harbor.’

The surprise Japanese attack on Pearl Harbor resulted in 2,403 deaths and led to the United States’ formal entry into World War II. Overnight, a sleeping nation was forced to wake up to the fact that it was woefully unprepared for war. The home front mobilized its human and material resources for the war- effort which created an unprecedented opportunity for women to enter the workforce outside the domestic sphere.

Cornelia Fort successfully landed her plane amid a fusillade of Japanese bullets that rained down over the airfield and like many Americans in the aftermath of Pearl Harbor; she felt compelled to join the war effort. That chance would come a year later when she was invited to fly with a small, elite group of female pilots known as the WASP (Women Airforce Service Pilots). They became the first females to fly American military aircraft – taking to the skies with courage, conviction and exquisitely tailored custom uniforms designed by Bergdorf Goodman.

With all civilian flights grounded in Hawaii, Fort returned to the mainland in early 1942. She made a short movie promoting war bonds that was successful and led to speaking engagements. Later that year, Nancy Love recruited her to serve in the newly established Women’s Auxiliary Ferrying Squadron, precursor to the Women Airforce Service Pilots. She was the second woman accepted into the service. The WAFS ferried military planes to bases within the United States

Stationed at the 6th Ferrying Group base at Long Beach, California, Cornelia Fort became the first WAFS fatality. On March 21, 1943, while flying in formation enroute from Long Beach to Love Field in Dallas, the left wing of her BT-13 was struck by the landing gear of flight officer Frank Stamme Jr.’s plane. Stamme had been flying too close to Fort’s plane, approaching her and then pulling back. On one of the close passes, the collision took place, breaking off the tip of her wing and six feet of leading edge. He was able to control his plane, but Fort went into an irreversible dive and crashed. The accident occurred ten miles south of Merkel, Texas in Mulberry Canyon, Texas. At the time of the accident, Cornelia Fort was one of the most accomplished pilots of the WASP. The footstone of her grave is inscribed, “Killed in the Service of Her Country.”