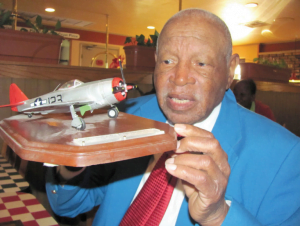 On Friday, May 3, 2013 the State of Florida passes a resolution honoring Tuskegee Airman Cornelius Davis. Below is the resolution.

Journal of the Senate – Florida
Friday, May 3, 2013
Number 23—Regular Session

WHEREAS, Cornelius received military leave from Ford Motor Company to join the Army Air Corps and, in October 1942, began basic training, first in Fort Custer, Michigan and, then, in Tuskegee, Alabama, followed by training as an airman at Buckley Field, Colorado, and

WHEREAS, Cornelius earned his place as a proud member of the Tuskegee Airmen, the first African-American military aviators in the United States Armed Forces,

and WHEREAS, before the Tuskegee Airmen, no African American had become a United States military pilot, and

WHEREAS, the Tuskegee Airmen were subject to racial discrimination, both within and outside the army, and

WHEREAS, despite the discrimination and adversity they experienced, the Tuskegee Airmen trained and flew with great distinction on behalf of the United States, flying more than 15,000 combat sorties, destroying 261 enemy aircraft, and receiving more than 900 medals, and

and WHEREAS, while on his way to participate in the invasion of Japan, Cornelius learned that World War II was finally over,

and WHEREAS, Cornelius left the service from Madison Field, Ohio, and went on to live a full and honorable life,

and WHEREAS, Cornelius Davis has earned his place as a part of Florida’s and America’s history, NOW, THEREFORE,

Be It Resolved by the Senate of the State of Florida:

That we recognize one of Florida’s great treasures, Cornelius Davis, and honor him for his service to our nation.

—was introduced out of order and read by title. On motion by Senator Montford, SR 1926 was read the second time in full and adopted.

At the request of Senator Simmons—

Journal of the State