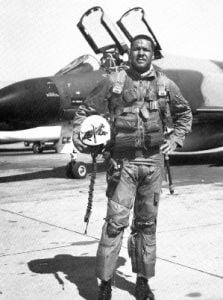 “The strength of the United States of America lies in its unity. It lies in free men blessed and ordained with the rights of freedom working to provide, build, enjoy, and grow… Today’s world situation requires strong men to stand up and be counted – no matter what their personal grievances are. Our greatest weapon is one we have always possessed – our heritage of freedom, our unity as a nation.”

The men and women who have served our country as Tuskegee Airmen have displayed immense courage and character, both in their military service and beyond. Their example has the power to inspire us now and for future generations. In this profile we take closer look at General Daniel “Chappie” James Jr., the first four-star general of the United States Air Force. He is yet another fine example of service, courage and integrity.

The Tuskegee Airmen, in all the different roles they encompassed in World War II, were critical to the advancement of civil rights in the United States, as well as positively shaping the perception of African Americans around the world. Add General James to the list of these true civil rights pioneers. Through a military career that spanned three wars, his service not only greatly benefited our country, but inspired many, many others to aspire to a career in aviation and military service.

Daniel “Chappie” James, Jr. was born February 11, 1920 to parents Daniel and Lilly Anna James of Pensacola, Florida. As a young man growing up in the Deep South during the era of Jim Crow, he experienced racism first hand and resolved to overcome discrimination and to excel. James graduated from Pensacola’s Washington High School in 1937. In September 1937 he enrolled in Tuskegee Institute in Alabama.  James graduated from Tuskegee with a Bachelor of Science degree in physical education in 1942. He learned to fly at Tuskegee as well and completed Civilian Pilot Training during his senior year.  It was also in Tuskegee that James met his wife Dorothy Watkins. They were married on the Tuskegee campus on November 3, 1942.

Having shown great skill as a pilot, James obtained a job at Tuskegee as a civilian instructor for the Army Air Corps Aviation Cadet program. He trained other pilots until January 1943 when he entered the cadet program himself.  James was commissioned as second lieutenant in the Army Air Corps in July 1943. During the next six years he completed fighter pilot combat training as well as bomber pilot combat training and was stationed at various bases in the United States.

James’ first assignment outside the United States came in September 1949 when he was assigned to Clark Field in the Philippines as the flight leader for the 12th Fighter-Bomber Squadron, 18th Fighter Wing.  But it was in 1950, when hostilities broke out in Korea, that he first experienced combat. Between July 1950 and July 1951, he flew 101 missions over Korea and became part of the first generation of jet combat pilots.

James returned to the U.S. after his year in Korea and over the next two decades rose quickly through the ranks of the United States Air Force. He graduated from the U.S. Air Command and Staff College in 1957.  James returned to combat during the Vietnam War and flew 78 missions between 1966 and 1967. In 1969, he was given the command of Wheelus Air Force Base in Libya. One year later, in March 1970, James was promoted to Brigadier General and became the Deputy Assistant Secretary of Defense and assigned to the Pentagon.  James was promoted to Lieutenant General in 1974 and was assigned to Scott Air Force Base in Illinois as Vice Commander of the Military Airlift Command. On September 1, 1975, Daniel James, Jr. became the highest-ranking black officer in the history of the United Sates military when he was named Commander of the North American Air Defense Command (NORAD) and promoted to the rank of Four-Star General. He would retain this command until his retirement on February 1, 1978. General James died less than a month later on February 25, 1978.

We honor the late General James and thank him and his family for their service to our country. May his legacy continue to inspire for generations to come. 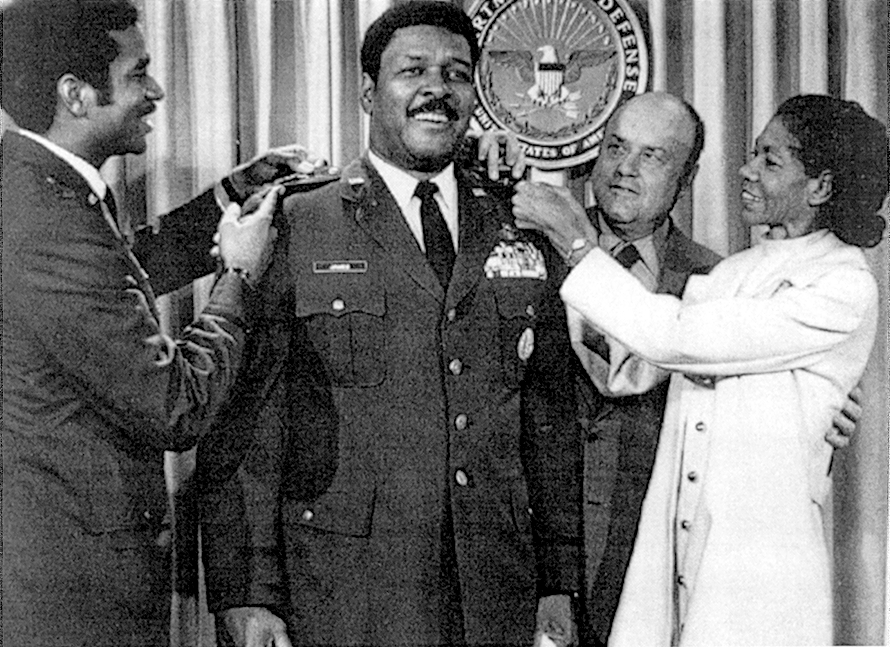