“I wanted to do something no one had done, pave the way and forever change the way of aviation. Someone had to do it, we had to start somewhere.” 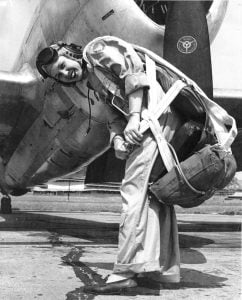 Deanie Parish in front of P-47 Thunderbolt on the flight line at Tyndall Air Force Base, Florida, in 1944

Deanie Bishop Parrish passed away peacefully in her home in Waco, Texas, on February 24, 2022, just one day shy of her 100th birthday. She met every challenge of her century-long life with spunk, determination, persistence, humor, kindness, integrity, steadfast faith, and a sparkle that lit up the room.

She was born Marie O’Dean Bishop on February 25, 1922; in a boxcar just off the main tracks in Defuniak Springs, Florida; to Jacob Ambus Bishop and Anna Ellen Bell. Nicknamed Odie, she was the middle child of seven brothers and sisters. In 1927, the family moved to the tiny town of Alturas in central Florida, where Odie followed her big sister to the one-room schoolhouse. Later that year, the family moved 30 miles south to the larger town of Avon Park. Odie again followed her sister to school, but the teacher said she was too young. Yet, her mom insisted the teacher test the young girl. Odie passed and began first grade a year and a half early. For the next 12 years, she never missed a day of school and graduated in 1939 as the Valedictorian at Avon Park High School. There may have only been 30 in her class, but she always said, “I’d still have been the Valedictorian even if there were 300!”

During the Bishop’s early days in Avon Park, they lived in a wooden-floored tent about four miles outside of town. When Odie was six, her family was fortunate to survive the Great Okeechobee Hurricane, now called Florida’s deadliest natural disaster. The young family took shelter in a cinder block home. The infamous Florida hurricane destroyed everything they owned except the family clock. It was found in a tree over a mile away.

While in high school, the five-foot-tall Odie played center on the basketball team until the team began traveling and she had to go to work to help support the family. By day, Odie was a bookkeeper and teller at the local bank, and by night, she was the cashier at the local movie theatre. When World War II started in Europe, the United States designated Avon Park as home to one of the hundreds of primary schools set up across America for young men to learn to fly. Young O’Dean, no longer called Odie, met the instructors as they cashed their checks at her bank. Convinced she was just as smart, if not smarter than the young cadets, she found an instructor and began taking lessons. Her first solo flight experience, taking off in a Piper Cub, was a harrowing one. Controlling the plane from the backseat as you do when you first solo, she was climbing to altitude and the control stick came off in her hand. She didn’t hesitate for one second as she tore her seatbelt off and climbed over the front seat just in time to keep the plane from stalling and crashing. Her instructor watched the whole thing from the ground and swore to himself if O’Dean made it down alive, she would never fly again! But when she finally landed safely and the stunned instructor found out why she landed from the front seat, he told her, “Now you know! You have the right stuff to be a pilot!”  Her death-defying “stick story” made the local paper and subsequent publications later in her life.

Once America was thrust into WWII, O’Dean packed up and headed for Houston, Texas, found a job in a bank, and continued flying. After earning enough money to buy a third share in an airplane, she began flying with the Civil Air Patrol, patrolling the coast for downed aircraft and submarines. In 1943, she heard about the WWII Women Airforce Service Pilots (WASP) training program, and on her 21st birthday, she applied. She was granted an interview with the head of the program, Jacqueline Cochran.

Thus, she boarded a train to Fort Worth, Texas, passed her interview and all tests, including an Army physical, and was accepted into the WASP Class, 44-W-4. She then paid her way to Sweetwater, Texas, and from November 1943 to May 1944, she trained to fly ‘the Army Way.”

“Our training program was the same as the one male cadets were going through all over the country: ground school, flight school, cross-country flying, night flying, instrument flying, daily calisthenics, flying link trainers, and constantly marching — the Army way,” Ms. Parrish said during an interview. “At the end of each phase of flight training, we were given Army check rides by Army Air Force officers. Those who didn’t pass washed out, packed their bags, and paid their way back home.”

Following graduation her first AAF orders were to Greenville AFB, Mississippi, as an engineering test pilot in BT-13s and UC-78s. She was soon transferred to Tyndall AFB, Florida, completed B-26 training, and was retained as an air-to-air tow target pilot to train gunners for combat.

After earning her WASP wings, Ms. Parrish was assigned as an engineering test pilot at Greenville, Miss. After the red-lined planes were fixed, she and other WASP test pilots flew them to see if they were air worthy for the cadets to fly.

“WASP lived in the officers’ quarters and took their orders from (Army) Air Force commanders,” Ms. Parrish said. “WASP flew every type of aircraft the Air Force owned –trainers, fighters, bombers — and they flew them in all kinds of weather and under all kinds of adverse conditions. They ferried personnel and hauled cargo; they delivered aircraft to points of embarkation; and they test-flew new planes, old planes, rebuilt planes and some planes that male pilots refused to fly. And they delivered many old war-weary airplanes to the junkyards and scrap heaps of America.”

Her most memorable assignment was at Tyndall for two reasons. First, as a tow-target pilot, she had the ability to master her flying skill in a twin-engine aircraft most pilots felt was too dangerous to fly, the B-26 Martin Marauder, and it became her favorite plane to fly. It had short wings and appeared to have no support, hence the reason the aircraft was nicknamed “Widow Maker,” “The Flying Coffin,” and others.

“Needless to say, these were ‘green gunners’ which means they were learning and some couldn’t shoot as straight as others. The plane had the worst training record but was the best in combat,” she said.

The second reason Tyndall was so memorable for her became a life-long treasure. It was a routine training mission that would result in her base commander walking her down the chapel aisle.

“During a target-towing mission, 1st Lt. Bill Parrish instructed his gunners to aim close so he could meet the ‘cute girl pilot’ towing the target,” she said. “They came so close, they put a few holes in my tail. When I landed, I started to give Bill a piece of my mind, but instead, I fell in love and we were married for 47 years.”

In less than two years, WASP flew more than 60 million miles for their country before they were disbanded on December 20, 1944. They flew every kind of non-combat mission the Air Force had and 39 of them made the ultimate sacrifice.

The WASP disbanded on December 20, 1944, and Deanie and her older sister moved to Langley, Virginia, where she challenged the U.S. Air Force to hire her as the first civilian chief aircraft dispatcher. They did, and in June 1946, Deanie and Bill were married. Months later, she followed him to the Panama Canal Zone. With Bill gone much of the time, she was hired as personal private secretary for the director of operations for the 6th Air Force.

For the next 20 years, Deanie was a proud Air Force wife. She followed Bill on his assignments as they started their family. Their first daughter, Nancy Allyson, was born at Lowry Air Force Base in Denver, Colorado. Their youngest daughter, Barby Anna, was born near Tachikawa Air Base at Tokyo General Hospital. Eventually, the Air Force sent the family to McGuire Air Force Base, New Jersey; Maxwell Air Force Base, Alabama; and finally, to Ellington Air Force Base, Texas, where Bill retired.

Bill retired from his second career in the real estate business in 1981, and the couple moved to Waco, Texas, to be near their grandchildren. Deanie began volunteering for Historic Waco and the Waco Welcome Corps. When she wasn’t spending time with her grandchildren, which was her favorite thing, she and Bill cruised the country in their motor home on mission trips. In 1992, Deanie wrote “We Got the Stuff, the Right Stuff,” the only WASP rap song, for the 50th Anniversary of the WASP. Unfortunately, her Bill passed away in 1993.

With the encouragement of her daughter, Nancy, Deanie agreed to volunteer as the Assistant Director of Wings Across America, a project created to educate and inspire generations with the history of the pioneering WASP. Deanie and Nancy began a 24-year journey of interviewing and sharing the inspirational stories of more than 100 WASP. In 2003, they co-founded the National WASP WWII Museum in Sweetwater, Texas. Deanie became an inspirational speaker as she continued to share stories about the WASP and helped lobby for the Texas WASP to be inducted into the Texas Aviation Hall of Fame. In 2007, Deanie and Nancy created a traveling FlyGirls exhibit for the Women’s Memorial in Washington, D.C. Deanie also began a campaign to lobby Congress to award the WASP the Congressional Gold Medal. At the official ceremony in 2010, Deanie proudly represented all WASP as the featured speaker at the ceremony where key U.S. Senators and the House Speaker presented the WASP with this well-deserved medal.

Deanie Bishop Parrish was a life-long Southern Baptist and a long-time member of Columbus Avenue Baptist Church. She served as secretary of the National WASP WWII organization, was inducted into the 99’s International Forest of Friendship, accepted the WASP Congressional Gold Medal, and also received a second Congressional Gold Medal for her service with the Civil Air Patrol. In 2011, she was honored as an Eagle in the Gathering of Eagles program at Maxwell Air Force Base, forever commemorating the heroes of our U.S. military. She was a proud Alumni By Choice of Baylor University, and as a pinnacle achievement, alongside her daughter, Nancy, she was inducted into the National Women in Aviation Pioneering Hall of Fame in 2015.

For Deanie, there was never an idea that was too big. Ensuring the WASP were in the history books was indeed a lofty goal, but she reached it. She raised the bar and challenged others to do the same. From learning to fly when women didn’t do that, to flying military aircraft to support WWII, to fighting for the Congressional Gold Medal that recognized the women who made such an impact…Deanie Bishop Parrish lived a blessed life that proved with God, nothing was impossible. She would challenge you to carry on that torch!