Dora Jean Dougherty Strother, also known as Dora Dougherty McKeown or Dora Strother McKeown, is best known as a Woman Airforce Service Pilots (WASP) and B-29 Superfortress demonstration pilot. Her career in aviation spanned more than 50 years and is unmatched for wide-ranging accomplishments. Her love of flying began as a child during family outings to a local airport. She earned her pilot’s certificate through the Civilian Pilot Training Program, which was sponsored by the Civil Aeronautics Authority. She went on to become the sixth woman in the United States to earn an airline transport pilot license. The demand for pilots during World War II created new opportunities for women. Dougherty was selected for the third class of the Women Airforce Service Pilot (WASP) program. She received her WASP wings at Avenger Field, Sweetwater, Texas in 1944. The Boeing B-29 Superfortress was being delivered to new heavy-bomber units and it had a problem with engine fires.

Some men refused to fly the new craft and labeled it dangerous. Colonel Paul Tibbets was in the process of putting together a special B-29 unit that later would drop the first atomic weapons. In a shrewd move, Tibbets selected Dougherty and another WASP to put on a demonstration. After a thorough check out, the two women flew the B-29 to Alamogordo, New Mexico. When Tibbets pilots saw the two women come out of the cockpit, it proved the aircraft’s airworthiness if even a woman could fly it! Tibbets describes Dougherty as one of the most competent multiengine pilots I ever hope to meet. When the WASP program was deactivated in December 1944, Dougherty had been checked out as pilot-in-command of 23 different aircraft. 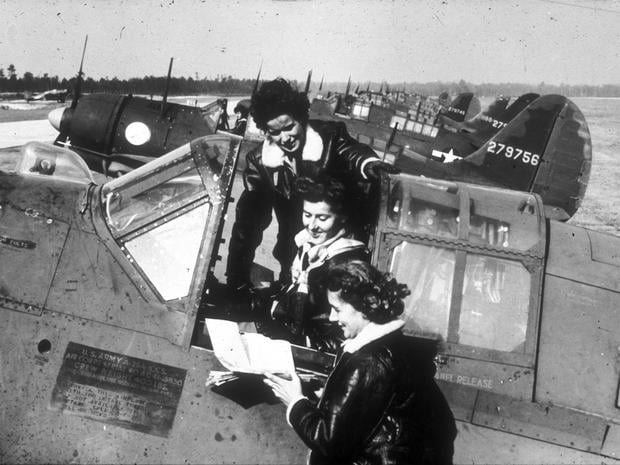 During World War II, Dr. Dora Dougherty Strother (top), a member of the WASPs, flew a wide variety of missions, including reliability tests of the B-29 Superfortress bomber

For the next five years, she taught civilian pilots and ferried aircraft throughout the United States. In 1949, Dora Strother was hired by the University of Illinois to teach primary, advanced, and instrument flight courses. She went on to earn a Doctorate in Aviation Education from New York University in 1955 and then returned to the University of Illinois as Chief Research Pilot. In 1958, Bell Helicopter hired Strother. She became the 27th woman in the free world to earn a helicopter pilot rating. In 1961, she established two world helicopter flight records that stood until 1966. In 1962, she became Chief of the Human Factors and Cockpit Arrangement Group.

As a manager, she led a design team that developed the cockpit management system for the Bell OH-58D. It was the first production helicopter with an electronic state-of-the-art cockpit! Following her retirement from Bell in 1986, she served as Human Factors engineer and consultant for the Army Science Board until 1991. Strother holds numerous awards, such as the Amelia Earhart Award for academic achievement, and is an inductee in the Military Aviation Hall of Fame.

Strother was first selected as an Eagle by Air Command and Staff College’s Gathering of Eagles in 1990 and was subsequently honored in 1997. She passed away November 19, 2013 at the age of 91.