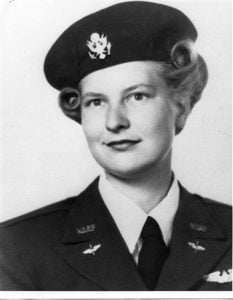 On May 4, 2022, Dorothy Ann Smith Lucas flew west to be with her fellow Sisters of the Skies. Just shy of her 100th birthday, she will be missed amongst the aviation community. Her tireless efforts to keep the WASP memory alive touched many over the years.

“It was a very patriotic time,” recounted Lucas of her service during World War II. “I just wanted to do something to help the war effort.”

“One day in early 1943, my friend Margaret told me about an organization that was looking for female pilots,” Lucas recalled. “We learned the age limit was from 21 to 35 years and that you had to have thirty-five flight hours to apply for admission to WASP. You also were required to be of good moral character, complete a personal interview with supervisors, and pass the rigorous Army physical for all military pilots.”

“I decided on my own that I wanted to learn to fly,” Lucas remembered. “Margaret and I had to drive fifty miles to Frederick, Maryland, to take flying lessons, 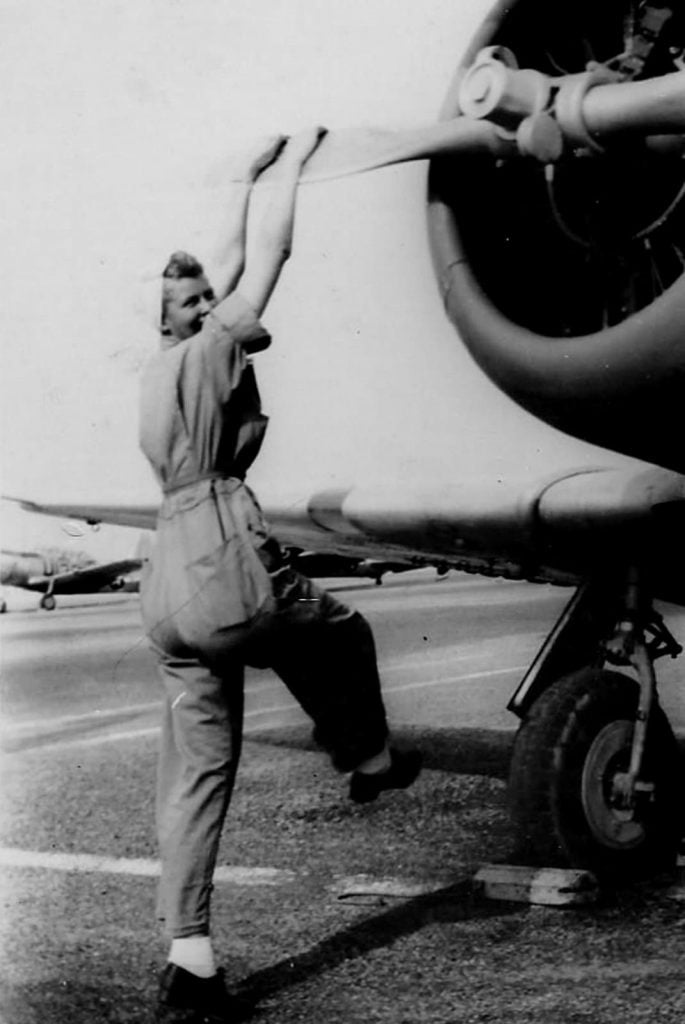 Smith turns a propeller (above) and boards (below) the renowned AT-6 Texan at Avenger Field in Sweetwater, April 1944

which were very expensive. We had to make that long drive because no planes were permitted to fly within a fifty-mile radius of the Capitol.”

Margaret never completed the WASP program, but Dorothy did. “It was my first time in Texas, a very different experience but very interesting for me,” she remembered. “But I always enjoyed meeting new people and going to new places. It was pretty amazing.”

Lucas, one of the youngest pilots in the program, was training in Sweetwater the day before her first solo flight when her brother, an Army Air Corps navigator, was killed overseas. Despite her mother’s pleas to return home, she stayed and got her wings.

After her graduation, her first assignment was at Moore Field in Mission, TX towing targets for male flying cadets.

“Our tow ships were AT-6 Texan advanced two-seat trainers,” Lucas explained. “There was a young enlisted man in the back seat operating the cable. On the end of the cable was a large flag, the target. The cadets undergoing gunnery training made passes at the target from their planes. After these sessions, I flew to the auxiliary airfield not far from Moore Field, where I slowed the plane. The young man in back released the target and reeled the cable back up into the plane. I then landed so he could jump out, retrieve the flag, and put it in the back seat. We then took off for the main airfield, and that was the end of a gunnery session, about an hour and a half in all.”

It was during this time she met her future husband, Capt. A. T. Lucas. “One day I was preparing to land at the auxiliary airfield when I saw his plane on the ground. He was watching his cadets shoot takeoffs and landings. I really wanted to make a smooth landing, but I leveled off too high and bounced in. Was my face red! That was the worst landing I ever made, but you know what? He married me anyway!”

Lucas recounted, “Not only did WASP prove that women could fly military aircraft as well as their male counterparts, but they also established a firm foundation for women in aviation.”

May we all honor and reflect on the legacy Dorothy Ann Smith Lucas leaves on the aviation community.