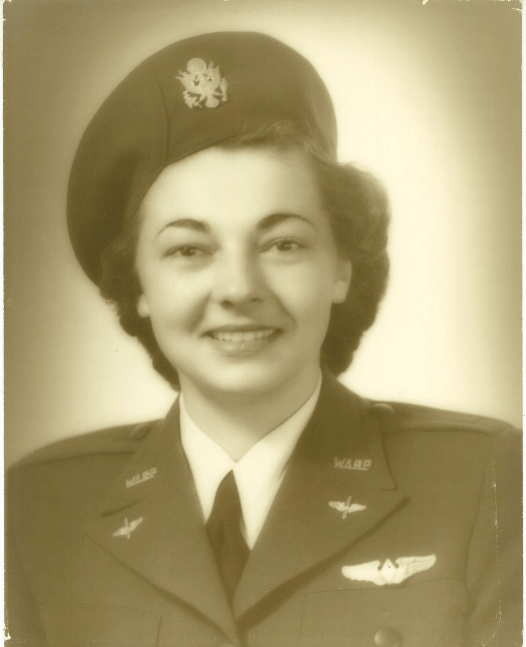 A determined, young Dorothy Britt (later Mann) from the small west Texas town of Plaska, suspended her studies at the University of New Mexico, where she was a member of Chi Omega Sorority,  before her junior year so that she could secure a pilot’s license and the necessary hours to apply to the WASP organization on the day she turned 21. She worked for the Civil Air Patrol and purchased a small engine plane with a friend, so that they could train and gain flight time. WASP recruits had to be at least 21, possess a pilot’s license, and have 500 hours of flight time. Finally, Britt met the requirements and was accepted as a trainee in the WASP in November 1943 for the class of 44-4. She was assigned, after graduation, to Moore Field, Texas. 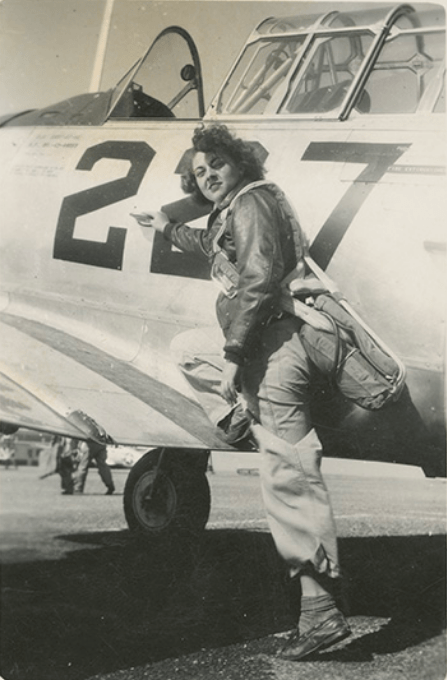 Britt didn’t have to go too far from home to begin training with the WASP. Avenger Field in Sweetwater, Texas, where all WASP trained by 1943 was under 200 miles from her hometown. The pilot-volunteers trained on military aircraft under Jacqueline Cochran, Director of Women Pilots. Britt was so petite that she had to use pillows to prop herself up in the cockpits in order to reach the pedals. In fact, the equipment and gear available for the women was often too large and had to be modified or had to be made personally for them.

After graduation, Britt stayed in Texas with her first assignment to Moore Field in Mission, Texas, home to the 2529th Army Air Force

Base Unit (Pilot School, Advanced Single Engine). She then transferred to Love Field in Dallas, Texas, which served as headquarters for the US Army Transport Command. There she ferried refurbished planes to other airbases. This was one of the primary duties of the WASP. Once at the new base they were responsible for finding transportation home, along with all of their gear. When flying on civilian transports home, Britt and other WASP enjoyed the looks on the faces of other passengers when they boarded with their parachutes.

Britt also tested new planes for stability and safety before they could be turned over to the male pilots to take into action overseas. WASP tested out and flew nearly every type of military aircraft and logged 60 million flying miles in their flight duties on the Home Front. Dorothy and the other WASP carried out dangerous assignments like towing targets behind their planes for gunnery training.

Britt married A.C. Mann in February 1945 and started a family. She and her husband opened a railroad construction business, Mann, Inc. in Centralia, Illinois, which she took over in 1973 when her husband passed away. Again, Britt found herself in charge in a male-dominated field. She became known as a shrewd negotiator and hard-working business woman. She died August 11, 1998 after a fight with cancer.

The legacy of Britt’s service was ever present in the lives of her family members, even if it was not recognized as such. Some of the qualities that likely inspired her to volunteer to serve her country in the air carried on into her later life and defined her, in particular, to her grandchildren, with whom she lived for a long period of time. Britt’s grandson, US Air Force Lt. Col. W. Crosby Parker, wrote:

“My Grandmother Dot had a quiet confidence that she exuded in everyday life. She always appeared to know exactly who she was, what she was doing, and where she wanted to go.”

In November 2019, Britt’s family, led by daughter Connie Parker, shared a collection of artifacts with The National WWII Museum, their first significant artifact collection from a WASP. The museum honored Mann’s family with a special presentation on Nov. 26 for their gifts, which included Mann’s dress uniform — a jacket and slacks, her flight jacket with the WASP logo designed by Walt Disney in 1994, her wings pin and other insignias that were attached to her uniform, her flight suit — which she and the other women of the force called a “zoot” suit and other written materials from the U.S. Department of the Army from before and after Mann enlisted with the WASPs.

“I didn’t realize it would be as difficult as it was after the fact,” Parker said. “I had to leave the museum and leave a part of me there.”

However, Parker said her sons, Shannon and Crosby Parker who have both served the U.S. military, convinced her that donating the items was the best thing to do and she had no regrets.

“They said it needed to go somewhere where other people could enjoy it,” Connie Parker said.

The family’s contribution allowed room for a full-fledged exhibit that details a part of her mother’s life, when Mann dropped out of college as soon as the program opened and bought her first plane — a Piper Cub — to earn flight hours and pursue her pilot’s license.

“These women fulfilled a role by flying these planes and even carried targets behind them for shooting practice,” Parker said. “… These women flew all over the U.S. to deliver the planes and they would have to take commercial airlines back to the base. I thought it was funny to picture mom and walking on a commercial flight wearing her uniform and carrying a parachute and making other passengers wonder why.”

Parker said the WWII museum spoke eloquently of her family during the presentation and did a wonderful job of turning their gift into a special memory.

“They said that if it weren’t for this donation, they wouldn’t have anything to show and tell the WASP’s story,” Parker said. “… A lot of the men at the time didn’t believe that women would be able to fly … but they flew everything and did a great job doing it.”

We thank her daughter, Marya, for sharing this beautiful tribute to her mother:

“Dorothy survived the war, had five children, learned to meditate, laughed exuberantly, cried regularly (she said it kept her regular) and made sense of her life in the twentieth which often seemed to be nothing as much as a vast cauldron of chaotic change.

If you didn’t have some solid spiritual center in the midst of it, you were done. But she did have that center. Her creative, spiritual center remained intact. All her WASP sisters whom I met over the years had that same remarkable confidence.

I feel, not proud — because I think pride too often leads to wrong action – but I feel grateful to be an American who can honor some of its true heroes, even after so many years.

I feel thankful to all who made the effort to take the sting out the legendary WASP story, and who made things right!

I feel elated for my Mom.”