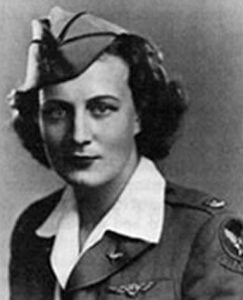 Dorothy F. Scott, was one of the 38 WASP that died in service.

While going to the University of Washington, she learned to fly float planes on Lake Union. Her father was learning to fly at the same time, but Dorothy soloed first. Dorothy was one of the original WAFS under Nancy Love’s command. She started at New Castle Army Air Base in Wilmington, Delaware and then went to the 5th Ferrying Group at Love Field, Dallas, Texas. While stationed at Love Field she was sent to Palm Springs Army Airfield for pursuit training in the P-39, P-40, and P-47. Initial training started from the rear seat on an AT-6 (BC-1) which simulated the view from a pursuit plane cockpit. December 3, 1943, there were several trainers and pursuit aircraft in the air when Dorothy was cleared for final approach in an AT-6. The tower had also cleared a PT-39 to follow her in. The PT-39, the faster of the two planes, overtook the AT-6 and the P-39 came down on top of Dorothy without seeing her. Both Dorothy and her instructor were killed in the mid-air collision.

More than eleven hundred women pilots flew military aircraft for the United States Army Air Forces during World War II. These pioneering female aviators were known first as WAFS (Women’s Auxiliary Ferrying Squadron) and eventually as WASP (Women Airforce Service Pilots). Thirty-eight of them died while serving their country. Dorothy Scott was one of the thirty-eight. She died in a mid-air crash at the age of twenty-three. Born in 1920, Scott was a member of the first group of women selected to fly as ferry pilots for the Army Air Forces. Her story would have been lost had her twin brother not donated her wartime letters home to the WASP Archives. Dorothy’s extraordinary voice, as heard through her lively letters, tells of her initial decision to serve, and then of her training and service, first as a part of the WAFS and then the WASP. The letters offer a window into the mind of a young, patriotic, funny, and ambitious woman who was determined to use her piloting skills to help the US war effort. The letters also offer archival records of the day-to-day barracks life for the first women to fly military aircraft. The WASP received some long overdue recognition in 2010 when they were awarded the Congressional Gold Medal-the highest honor that Congress can bestow on civilians.

A new book from Sarah Byrn Rickman has  been released, called “Finding Dorothy Scott, Letters of a WASP Pilot”. This interesting book tells the story of Dorothy Scott, a female pilot, who joined the war efforts of the Second World War.