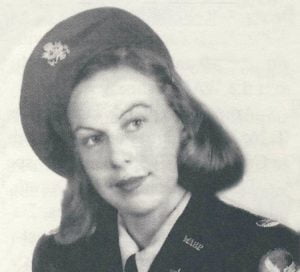 Dorothy Johanna Fulton was – like so many young women of her day – enthralled with Amelia Earhart. Like her heroine, aviation became Dorothy’s passion. This, says her sister Honey Fulton Parker, caused their parents some concern. But Henry LeRoy and Johanna Crystal (Jensen) Fulton – descendants of the steamboat inventor Robert Fulton and Danish shipmaster from Copenhagen respectively – didn’t stand in their oldest daughter’s way, opting instead to help her pave the road to aviation history for women pilots.

Born October 14, 1918 in Ridgefield Park, New Jersey, Dorothy began flying at fifteen. Then nearby Teaneck High School did something absolutely revolutionary – it became the first high school in the country to offer a two-year flying course that allowed students to work toward a pilot’s license. Dorothy was the first girl to graduate in the class. She soloed March 27, 1936, was granted her amateur license a few months later, and earned her regular private pilot’s license on August 5, 1937. After graduation, she went on to earn her commercial, multi-engine and instructor’s rating and taught flying and ground school at Bendix Airport, which is now Teterboro.

Flying and instructing on the side, Dorothy attended New York University as an aviation major and then went into business, buying her own airplanes, and running a flying school at several New Jersey airports. “She did everything – ground school, flight instructing. Way back in the thirties, she was trying to prove that women could fly as well as men, “says Honey.

When she joined the WAFS in October 1942 with 3,269 hours in her log books, Dorothy was number twenty-three to be accepted but became number twenty-two on the final squadron list. She posted in Wilmington for a year, then was part of the first group sent to Palm Springs in October 1943, where she served until November 18. From there she was sent to Long Beach where she received multi-engine checkout on December 2 and then was checked out on a BT-13, January 13, 1944.

On March 18 of that year, Dorothy was transferred to the 3rd Ferrying Group in Romulus. There, she came down with a severe case of pneumonia – brought on, according to Honey, by ferrying open cockpit trainers. Hospitalized for two months with complications, she was released for ground duty and advised by her physician not to fly. Finally, she resigned from the WASP the summer of 1944.

Delphine Bohn said of Dorothy: “Over and above her normal piloting and her military-group chores, Dorothy must have made between forty and fifty twin-engine flights coast-to-coast. The woman was a patriot and a real worker, along with her many other attributes.”

After the war, Dorothy went back to instructing and continued to teach in New York and New Jersey. She married, had one son, and eventually divorced. She was a breast cancer survivor, but died of pneumonia and complications on February 11, 1985 in North Miami, Florida.

For Women’s History Month in 2000, the public library in Teaneck showcased Dorothy Fulton and her aviation career – with information and photos compiled by her sister. Honey also sponsored Dorothy’s inclusion in the Women’s In Military Service for America Memorial. The memorial is located in the Hemicycle, the ceremonial entrance to the Arlington National Cemetery.