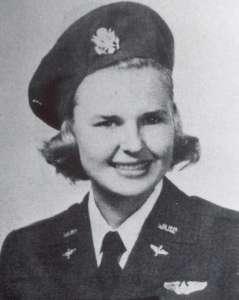 From 1989-1997, the Commemorative Air Force Wisconsin Wing newsletter featured Dottie’s original letters about her WASP experiences during WWII. Thanks to Robert Segel, former editor of the newsletter, we are thrilled to share with you these firsthand accounts written by Dottie about her time as a WASP and to the CAF WASP Squadron for allowing us to share these stories with you.

“I thought it was curtains.” That’s what Women Airforce Service Pilot Dottie Hines Mosher recalls in this letter detailing her first ride in an AT-11. It was supposed to be an easy flight back to Avenger Field, but a little showing off gone wrong turned this story into a harrowing tale.

My most memorable Open Post was a dance in the Officer’s Club at the Big Spring Bombardier Base. Pat Hopkins and I had been invited by our friends at the base, Lt. Al (pilot) and Capt. Ed (kiwi).

The WASP attending were treated like queens and had a super time. We spent the night Big Spring and planned to take the bus back to Avenger Field Sunday afternoon. Surprise – the guys managed to check out two AT-11’s (the twin engine used to train bombardiers). We were thrilled!

Once aloft, I settled back in the co-pilot seat to enjoy my first ride in a twin engine aircraft. It was a warm, lovely, late spring afternoon and everything was tranquil and serene. Lazily I watched the plane ahead swoop and soar like a huge bird.

Suddenly, Lt. Fred, pilot of the lead plane put his ship into a slow roll, over it went, 360 degrees around the horizontal axis until again straight and level and continuing in the flight path.

I didn’t give it much thought till Capt. Ed came crawling through the passageway from the Plexiglas nose of the plane where he and my friend Pat were sitting. Looking up at Lt. Al he shouted, “Aren’t you going to do one?” (Shouted because of the roar of the engines.)

The pilot hesitated, then nodded a slight “affirmative”; he didn’t look very eager about the idea. The plane started rolling slowly to the right, until we were upside down. Then all heck broke loose!

The pilot didn’t (or couldn’t) complete the rollout, which leaves one alternative, you split-S, you go DOWN! And down we went, gathering speed at an incredible rate. I couldn’t believe it – one minute all was peaceful, now we were plunging earthward like a streamlined rock, enveloped in a deafening roar. It was a nightmare in broad daylight!

I glanced at the Lt.’s face; it was grim and determined and he was hauling back on the wheel for all he was worth, trying to start a pullout. But it was useless; we were going so fast the pressure on the control surfaces was so great they seemed unbudgeable. We were in a vertical dive with the earth rushing up at us – I thought it was curtains.

Then the pilot made the move that saved our lives. He reached down and slowly turned back the elevator trim control; the pressure of the air was broken and the nose began to come up. Bless that little trim tab!

The pullout, with all that speed, was overpowering. Up we went to cruising altitude; I became weak as a rag and couldn’t utter a sound.

It is amazing that we had enough altitude to pull out of that scary dive. I felt truly thankful that God’s Hand had been on that hand of the pilot, and my friends and I were still alive in this wonderful world! 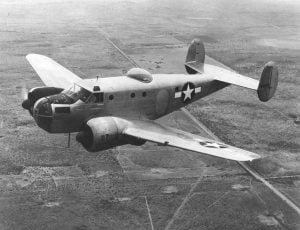 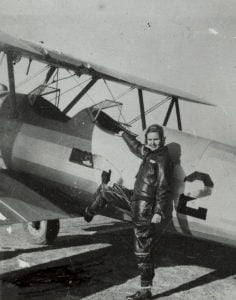 How are your Morse Code skills? Think you could receive 8 words per minute? Could you send a message using only the flashes of a lamp? These are just some of the intense and challenging things Women Airforce Service Pilots learned in the Instrument Phase of training.

In this letter from Dottie Hines Mosher, WASP Class 44-6, she recalls learning to fly on instruments and some of the other grueling (and some fun!) lessons from flight training.

The most enjoyable part of instrument flying was Radio Range. We “flew the beam to Abilene”, a city 50 miles east of Sweetwater. For practice we had team rides; the front seat pilot took off and flew to the area – the rear seat pilot got under the hood and attempted to orient herself by the “A” and the “N” signals coming from the Abilene radio tower. The girl under the hood on instruments was totally dependent on her buddy for the safety of the ride. When you emerged from the hood and saw the Abilene Airport beneath you, it was a thrill! The second period the front seat pilot took over on instruments and her teammate was the lookout pilot.

Important too was learning to receive Morse Code, an absorbing experience which required confidence, concentration, patience and practice. We were told it was based on the phonetic method of instruction, a new language which we would soon be able to read, write and by means of it, communicate with others. In addition to the “dah-dit” sound system used by the A.A.F. there were visual means of transmitting Morse Code: by lamp (long and short flashes) and by flags (different positions to the right and left of the flagman).

The Phonetic Alphabet: A, Able; B, Baker; C, Charlie; D, Dog; E, Easy; F, Fox; G, George; etc. When we reached the proficiency of receiving 8 words per minute we no longer had to attend the class.

Also, important (to somebody, evidently!) was the Link Trainer, a small airplane on a post in which we practiced instrument flying; an operator at a nearby desk kept track of our maneuverings. Flying in Link was simultaneously fun and frustration; by the time we had the requisite 25 hours we also had a bellyful of Link!

Friends could ask for the same instructor in Basic; Hutch, Pat and I got Mr. Getchell, a soft-spoken man who believed in encouragement and approbation. What a difference and what a blessing to weary us!

On one check ride I rode with Captain Holtshulte, a hard man to please. He gave me “unusual positions” and I already pitched around trying to calm the instruments to straight and level. He told me I was too violent on the controls; well, who wouldn’t be, when an old meaning pulled a snap roll while you were under the hood struggling with instruments – was that the human thing to do?! Anyway, I didn’t spin in.

Though the Instrument Phase was arduous and ofttimes bewildering and exhausting, I liked it, an essential ingredient to the flying scene. Only drawback, you kept hearing those signal “beeps” for hours and couldn’t hear anything else worth peanuts! 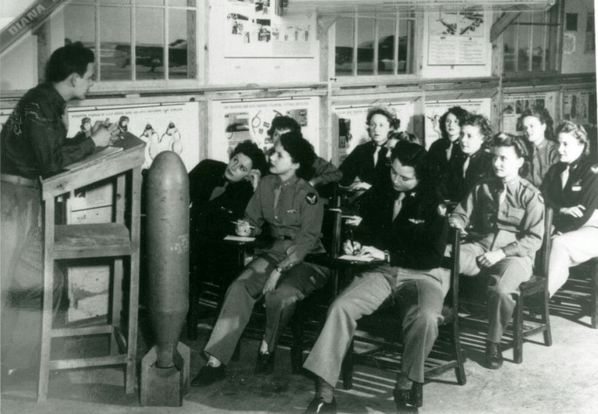 Although many photos of Women Airforce Service Pilots feature gorgeous ladies, all smiles as they pose next to WWII aircraft, the grim reality was, crashing planes and washing out (or getting kicked out of training in layman’s terms) was constantly in the back of these women’s minds. WASP Dottie Hines Mosher recalls a few memorable WASP crashes and heartbreaking washouts in this letter that was originally published in the Commemorative Air Force Wisconsin Wing newsletter.

One doesn’t like to think about the negative side of an experience, but washing out or crashing were an ever-present possibility, hovering over WASP trainees like an ominous cloud.

The big anguish for me was my pre-WASP friend’s falling victim to the dreaded old “washing machine”, about the middle of Primary. Fritzi (Bunny) had been doing fine and there was no sign of trouble; then came the brutal blow. She didn’t make the grade in three crucial categories: progress checks, civilian and Army; her “E” (elimination) ride and the reviewing Board’s giving her more time.

Fritzi was heartbroken, as were her flight II friends and I. She wouldn’t talk about it, so I could only guess what happened. We had closely shared the dream of flying for the A.A.F., and had planned and worked together toward that goal. For a time, I was unable to concentrate on anything but her great disappointment. (She eventually got her commercial license and a job with Pepsi towing banners. Then came an awful accident – she was critically hurt and her face was smashed in but she lived. I can hardly write about it; it brings back such painful memories.)

There were others whose washing was hard to understand, like the classmate who had been a police officer before the WASP. She was an intelligent, well-liked, jolly gal with the demeanor of self-confidence, but also had the misfortune of landing downwind at the auxiliary field. It wasn’t long before “Downwind” was axed.

Inability to meet the flying standards wasn’t the only basis for dismissal. A girl could wash out for ground school failure, personal conduct or too many demerits.

Accidents, injuries and deaths, though terribly traumatic were relatively few, considering the many planes circulating around.

My good friend and baymate, Marge H. nearly totaled an AT-6; on making her cockpit check prior to taking off missed the elevator trim tab control, which was in the landing position. When the plane became airborne the nose swung abruptly upward, the aircraft flipped over and came down with a crash. The 6 was a mess, but Marge was unhurt. Evidently this oversight on her part wasn’t considered serious, as she wasn’t punished.

Mary and Laura were on instrument practice “buddy ride” when we got word that their BT-13 had crashed near a farmhouse. Both girls were badly hurt and were hospitalized for a long time. Speculation was that each WASP thought the other was flying the plane until it was too late.

There were too fatal accidents in our class 44-6. The trainees were in the same bay, in cots side-by-side. They were flying AT-6’s.

Lib had taken off and was climbing when her plane was hit from above by a graduating WASP returning from a cross-country flight. They came together in a fiery crash and plunged to the earth, killing both instantly.

Marge E. was on a cross-country when she crashed in a farmer’s field near Childress, Texas. He said her plane appeared to be coming in to land; at about 200 feet the pilot got on the wing and jumped. Her parachute never opened.

The accident rate for WASP was about the same as for male cadets. Such probability went with the territory – it could have happened to any of us; at the time I didn’t think about accidents much, only about the fun of flying. 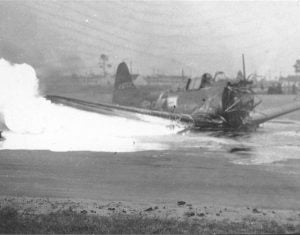 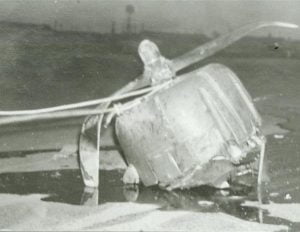 Pictured: Wreckage from Joyce Sherwood’s crash at Camp Davis. Sherwood, class 43-W-3, and her instructor survived this crash. Her shoulder harness saved her life. This picture was taken immediately after the crash. Classmate Mabel Rawlinson was killed in a similar plane two days before. Crash photos courtesy Texas Woman’s University.