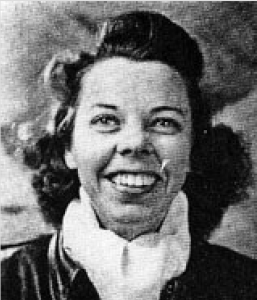 Dorothy Mae “Dottie” Nichols was born in Island County, Washington. She was a graduate of UCLA, Los Angeles, California. She entered the AAF for flight training at Houston Municipal Airport in TX on December 19, 1942, and graduated at Avenger Field, Sweetwater, Texas on May 28, 1943.

Dorothy reported to the 6th Ferrying Group at Long Beach Army Air Base after basic training. After a year of flying lighter aircraft, she graduated from pursuit school on May 15, 1944. She ferried P-47s, P-40s, and P-39s for about a year.

The P-39s were being sent to the Soviet Union as part of the Lend-Lease agreement. Passed by Congress in early 1941, the Act allowed transfer of military equipment and supplies to any nation whose fighting was vital to the national security of the United States. However, the women couldn’t fly out of the country, so once the planes reached Great Falls, men from the Ferrying Division flew the planes on to Fairbanks, Alaska, where they turned them over to Soviet pilots.

Stranded in Bismark, ND because of weather, Dorothy reported problems with the engine and the carburetor was replaced. A substitute part had to be used due to lack of parts. At the end of the runway, Dottie checked out the plane. It was not running properly and others in line to take-off moved aside to let her return to the flight line, but she went on. Shortly after take-off, the engine quit. The plane crashed and went up in flames. An accident investigator reported that Dottie was killed by the control stick going through her forehead before the flames engulfed the plane.

It took three days by train for Dorothy’s body to reach home. Her mother was waiting along with seven other WASP in dress uniform, who would act as pallbearers. Jary Johnson, a WASP flying another P-39 with Dorothy, escorted Dorothy’s body back to Los Angles for the funeral, which was attended by both Nancy Love and Jackie Cochran.

Although it was rare, an American flag covered Dorothy’s coffin and, at the end of the burial service; her mother took it home.