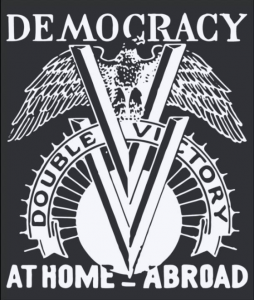 “I wanted to go into the service and felt this was my country…. And even though some forces in the country would deny me full citizenship, I felt I had just as much ownership in this country as anyone else. And should it become my turn to fight for my country, I would certainly do that with as much pride, honor and vigor as anyone else.” – Tuskegee Airman Lt. Col Harry Stewart Jr.

The legacy of the Tuskegee Airmen is about more than the airplanes they flew, their combat records, or their fame. It is about overcoming obstacles no matter how large or complex they are. The Tuskegee Airmen prescribed to the theory of winning a “Double Victory”, which meant winning the fight against fascism and racism.

The United States entered World War II in 1941. African Americans had fought in every war since the Revolutionary War and always hoped that with service would come liberty and full enfranchisement under the law. Each time, African Americans had been bitterly disappointed in the nation’s refusal to reward, or even recognize their service. 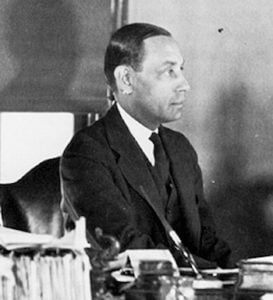 Founded in 1907, the newspaper championed the causes of African Americans. In 1910, when attorney Robert Vann took the helm of the paper, he quickly radicalized its voice.

The newspaper gained national prominence when it boycotted the popular ‘Amos and Andy’ radio program in the 1930s for their racially insensitive stereotypes and minstrel show acts that demeaned African Americans as caricatures. Then, in 1932, the newspaper endorsed Franklin Roosevelt, ending the fealty African Americans had paid to the Republican Party since the days of Reconstruction.

The Pittsburgh Courier was an unapologetic megaphone for African Americans, and Vann’s protégé, Ira Lewis, took leadership of the popular newspaper. Under his leadership, its political activism increased.

When WWII began in 1939, Lewis and Americans of all races looked at Hitler’s actions in Europe with a mix of anger and sadness. What made Lewis and other African Americans especially sad, was that Hitler’s words seemed too familiar. In many ways, it seemed Hitler looked to the U.S. for its model on segregation, subjugation, and terrorism against the Jews living there.

This paradox was too much irony to ignore, and Lewis looked for a way to illustrate the U.S.’s similarities to Hitler and Nazi Germany. Lewis, endorsed by the National Association for the Advancement of Colored People (NAACP), was armed with all the righteous indignation they could muster and went to work, determined to end segregation nationwide

In 1942, the Pittsburgh Courier published a letter from an African American soldier named James Thompson. “Should I Sacrifice to Live ‘Half American?” Thompson expressed emphatically that African Americans fighting for the U.S. should immediately receive full citizenship back home.

By running the letter, Lewis and staff had also declared a war on racism in the United States while at the same time helping the nation win WWII.

There was no way that African Americans could fight and die for a nation that would ensure the freedom of other whites across Europe, but ignore their own lack of freedom at home. Lewis and the Pittsburgh Courier, African American soldiers, and African American workers were determined that by the war’s end they would indeed be free…and so would the United States.

Lewis and the Pittsburgh Courier described their campaign against the United States, thusly, ”Victory at Home & Victory Abroad,” also called the Double V Campaign. The intent of the campaign was to win for African Americans the blessings of the same liberty that everyone else in the United States took for granted.

In their February 14, 1942, article, which advocated for the Double V Campaign, the rousing editorial ended thusly, ”WE HAVE A STAKE IN THIS FIGHT…WE ARE AMERICANS TOO.” The Pittsburgh Courier echoed the sentiments of many African Americans at the time, and stated clearly that not only were African Americans loyal patriots, willing to fight and die for their country’s freedom, they were willing to fight and die for their own liberty back home, as well.

The United States was seeking to protect freedom and democracy abroad but were not willing to afford the same to thousands of African American men, and women fighting in their military. There were also thousands of African American civilians working in the wartime industries directly supporting the war effort, who worked in segregated conditions unable to advance via promotion.

The Double V Campaign’s goals were simple, illustrated by their Double V logo. The two-front war’s aims were to end racism at home and to defeat the Axis Powers. At home, A. Phillip Randolph and the NAACP demanded that President Roosevelt desegregate the government industries in which so many African Americans worked.

In 1941, Randolph informed President Roosevelt that if war industries were not desegregated, thousands of African Americans would lead a protest march on D.C. Roosevelt was afraid that the still-segregated D.C. would fall prey to race riots during the march.

Winning the war against the Axis Powers was just as important to the campaign. African Americans, serving with distinction and helping their nation win the war, was the key to pointing out the nation’s hypocrisy. If African Americans did their service, once the war was over, they would have a real case for ending segregation nationwide.

It was not until July 28, 1948 when President Harry S. Truman put forth Executive Order 9981 that ordered the integration of the armed forces.

The Lucasfilm Double Victory: The Tuskegee Airmen at War is a feature-length documentary that tells the full story of the Tuskegee Airmen’s experiences during World War II. With rare archival materials and original interviews with veterans, the film originally debuted on television and is now freely available as part of Lucasfilm’s educational efforts.

Below are YouTube links to each version of Double Victory:

This Lucasfilm page features an Educational Guide designed for students grades 6-12. It explores questions and themes about the Tuskegee Airmen story, and introduces connections to our world today in order to foster a larger discussion between students and teachers.