Douglas Bembry from Indianapolis was a member of this revered group. Bembry died in 2017 at the age of 92, but we wanted to share his story again. This “Only in Indiana” report first aired in July 2015.

Seventy-two years have passed since Douglas Bembry was Corporal Bembry in the 100th squadron of the Tuskegee Airmen stationed in Italy during WWII.

“I don’t like to think about it,” he said while sitting in his Indianapolis town home. “A lot of people like to talk about it. This was no picnic. This was war.”

He was part of the ground crew, trained in welding and sheet metal.

“If it hadn’t been for the ground crew, the plane would have never got off the ground,” he stated proudly. But even now at the age of 91, he remembers the sky being so full of bombers and fighter planes that they would literally blot out the sun.

He fondly remembers when then-First Lady Eleanor Roosevelt visited the Tuskegee Institute and wanted to go up in a Redtail trainer. All the trainer pilots at the time were white.

“So she pointed at this guy and said she wanted to take a trip. He pointed to a white guy and she said, ‘No, I want him,’ and Eleanor climbed up into this two-seater, the A18, and took a trip in the trainer. She sure did. Ya buddy,” he remembered.

Bembry has all the medals and as a member of the Tuskegee Airmen was recognized by President George W. Bush.

“It only took 60 years to get there. We felt like we should have got that before. I’m proud of it. I wouldn’t take anything for it,” he said. “We made a trip from southern Italy all the way to Berlin and Hitler had jets, and with our props, we shot down three jets.”

“When we were over in Italy and everybody was shooting at each other, the Germans and the Italians, everybody was like brothers. But as soon as we were coming back and we looked up and saw that Statue of Liberty, I was black again,” he said in a tone that hovered somewhere between disbelief and acceptance.

Upon their return, some of his friends re-upped and they even asked him, “‘Corporal Douglas Bembry, would you like to re-up?’ I said, ‘Sir, give me bus fare to Atlanta, Georgia. I’m gone’.”

He would eventually land in Indianapolis. Now, 50 years later, his grown children would share this moment with him as he looks over his pride and joy in a private hanger at Metropolitan Airport – his very own P51 Mustang fighter plane.

In an interesting aside, in spite of being a Tuskegee Airman, Bembry said flying is not his bag. In fact, he says he only flew commercially once and never planned to do it again. 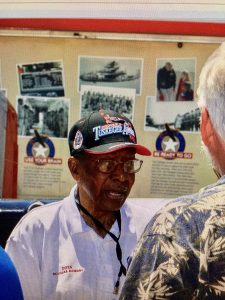 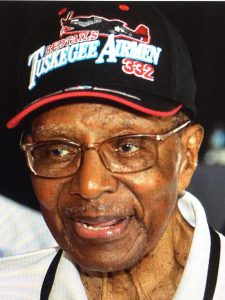 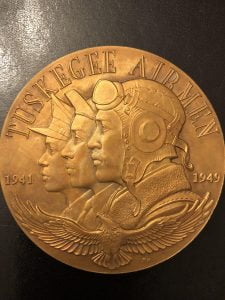