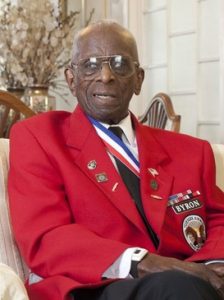 Cyril Osbourne Byron Sr. was the son of immigrant parents from Jamaica. His father was Cyril Byron, a chef and caterer, and his mother was Blanche Byron, also a caterer.

He was born in New York City and raised in the Bronx. He graduated in 1939 from Morris High School, where he was a multisport athlete, lettering in basketball, baseball and track and field.

Dr. Byron enrolled at what was then Morgan State College. He played basketball, ran track and field, and was the football team’s star quarterback.

It was at Morgan that he met and fell in love with his future wife, Freda Marcella Jefferson, who earned a bachelor’s degree in sociology in 1943. His college career was interrupted by the outbreak of World War II.

“College life came to a screeching halt with the bombing of Pearl Harbor in 1941 that I heard in the Morgan cafeteria,” he told Beatrice O. Scott, whose book, “Memoirs of a Tuskegee Airman,” was published in 2014 by Digital Publishing.

“I was able to complete my sophomore year before receiving my draft papers and was one of the first two students from Morgan to leave for the war,” he told his biographer.

After completing basic training, he was sent to the 99th Pursuit Squadron, later renamed the 99th Fighter Squadron, in Tuskegee, Ala. It was the only black unit in the Army Air Corps.

He was initially assigned as a crewman maintaining airplanes, particularly the .50-caliber machine guns.

Dr. Byron’s unit was shipped to North Africa, landed in Casablanca and joined the 15th Air Force, then was transferred to the 8th Air Force. After participating in the North African campaign, the unit landed in Sicily for the invasion of Salerno.

In Ramitelli, Italy, the 99th Fighter Squadron joined the 332nd Fighter Group — the all-black squadron known as the “Red Tails” because airmen painted tails of their planes a distinct red.

“We learned discipline … and you learned how to accept responsibilities and duties,” he said in a 2006 interview with the Community Times of Reisterstown. “The pilots depended on it. You had to keep the planes flying.”

“Many of the Italians asked us why we were fighting for their freedom when we did not have it back home. We would say, ‘Maybe someday,’ and pray,” he told his biographer.

In the Community Times article, he said, “You accept things. You know segregation was out there, but we were fighting for things to be better back home.”

Because he knew how to type, Dr. Byron was assigned to administrative duties at headquarters, a job he held until being discharged in 1945 with the rank of sergeant major.

Dr. Byron re-entered Morgan State and completed his bachelor’s degree in chemistry in 1947. He sought work as a research chemist, then joined the Port Authority of New York & New Jersey as a police officer, working the Holland and Lincoln tunnels and George Washington Bridge.

After earning a master’s degree in 1952 in science education from New York University, he joined the faculty of Fort Valley State College in Georgia. He taught chemistry and mathematics and was assistant football coach.

A year later, he became a faculty member at then-Coppin State College teaching chemistry, physical sciences and mathematics. He later headed the college’s science department and rose to associate dean of the evening and summer school. He served as president of the Faculty Senate and was named dean of education. He also coached basketball and was director of athletics.

In 1974, he earned his doctorate in science education from Temple University in Philadelphia, and two years later was appointed associate dean of the Division of Natural Sciences, Mathematics and Physical Education at Baltimore City Community College. He retired in 1991.

As a documented Tuskegee Airman — which entitled him to wear a red jacket in honor of their Red Tails — he was among the group presented the Congressional Gold Medal in 2007 by President George W. Bush at a ceremony at the U.S. Capitol in Washington.

And he attended the two inauguration ceremonies of Barack Obama at Obama’s invitation.