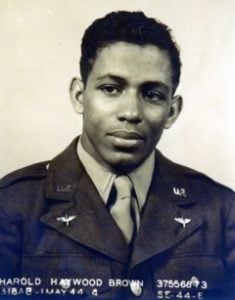 Harold Brown knew in the 6th grade that he would be a pilot. He is an accomplished man who grew up in an era when African Americans were severely marginalized. Despite this fact, he said: “I was certain that all of the obstacles would be resolved by the time I finished high school and I would be selected for flight training.”

After graduating from high school, he applied for military flight training. He passed the mental exam but flunked the physical because he needed to weigh no less than 128.5 lb for his height. He weighed 128.25. To gain weight, the doctor told him to drink an ice cream malt with an egg in it, morning and night before the retest. “And don’t have a BM,” Brown was told by the doctor. He weighed-in at 128.75! Four months later, in December of 1942, he reported to Tuskegee Institute for flight training.

Brown successfully completed his training and graduated on May 23, 1944, receiving his wings and commission as a 2nd Lieutenant, at 19 years of age. 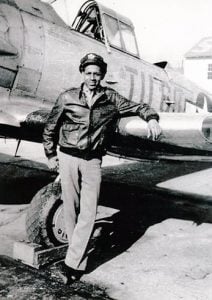 After graduation, Brown was off to fighter training for about 90 days, then overseas to join the 332nd Fighter Group stationed in Ramitelli, Italy. Their job was to protect bombers on their missions. The Tuskegee Airmen were extremely successful. “Initially the bombers didn’t know who was flying The Red Tails” (a nickname for the planes flown by the Tuskegee Airmen). In time, the bomber pilots were saying things like: “Man, these guys stick with us, they don’t leave us, they pick up stragglers, find them, and bring them home.” When they learned who we were, most of the bomber pilots were happy, but there were a few who would still rather take their chances than have us. But it was overwhelmingly the other way. They started calling us the Red Tailed Angels, because we lost so few bombers.”

On his 12th mission, December 9, 1944, Lt. Brown’s plane was hit by enemy ground fire; however, he made it into friendly territory. He blames this on the “exuberance of youth.” He and his wingman chased a German ME 262 twin-engine jet. “We should have broken it off and we didn’t. So the enemy led us over enemy positions and we got caught in heavy ground fire.” After reaching friendly territory, Brown experienced fuel exhaustion. “I began looking for a place to crash land when I spotted an abandoned air strip.” The plane was heavily damaged, but he walked away from it. Brown said, “There is an old saying, ‘Any landing you can walk away from is a good landing.’” Six days later he made it back to base.

On his 30th mission on 14 March 1945—a strafing mission—he was shot down and captured. His story of capture is a saga in itself.

At age 20 he was a prisoner of war and held at a POW camp south of Nuremberg. It was here that he saw a fellow airman, Lincoln Hudson, who had been beaten almost beyond recognition. During his two months of imprisonment, Brown, himself, was not tortured or beaten. Listen to his story of imprisonment.

The Americans were advancing and the Germans decided to evacuate the 10,000 prisoners to Stalag Luft VII-A at Moosburg (about 30 kilometers north of Munich, Germany.) The trip would take about 10-12 days and they were bunched into groups of 200. The prisoners arrived in Moosburg. In the distance Brown and the others could hear General George Patton and his tanks advancing. On April 29, 1945, Patton arrived at the prison camp. The Germans had pulled out a couple of hours earlier. Brown said, “There was much hollering and screaming by the 25,000 prisoners who knew the war was over for us and we would soon be on our way home!” Learn more about the 32 captured Tuskegee Airmen POWs.

Dr. Harold Brown has been generous with his guidance and support for the CAF Red Tail Squadron. As our RISE ABOVE program has evolved over the years, he has provided direction to program leaders, spoken in person many times to our audiences, and even hosted the RISE ABOVE Traveling Exhibit in his hometown. This gracious American hero continues to exemplify the attitude and passion that surely made him a top notch original Tuskegee Airmen as well.

A native of Minneapolis, MN., Dr. Brown’s personal history is full of remarkable points of interest… and inspiration. As a child he dreamed of being a pilot, even though at the time black men were regarded as incapable of flying for the military. With the advent of the flight-training program at the Tuskegee Institute in 1941, Dr. Brown got his chance to fly and graduated from the program in 1944, earning a spot in the famed 332nd Fighter Group. You can read more about his thoughts and experiences with the P-51 on our blog.

This gift of flight was not without its struggles. “Purposeful and malicious roadblocks were set before us to cause our failure,” recalls Dr. Brown. “Not just me, but it’s what the entire group had to overcome to accomplish our goals. It is significant, and young people today can learn from it. Find your passion, find what you love. Set goals and go after them with your whole heart. That’s the best way to find success. That’s how we overcame our obstacles to become Tuskegee Airmen.”

During his time in combat, Dr. Brown completed ground and combat missions, strafing targets on the ground and protecting bombers in the air. On his 30th mission, Dr. Brown was shot down over enemy territory, bailing out of his badly damaged P-51 and being taken as a POW. For six weeks he was kept captive, the possibility of losing his life staring him starkly in the face. Dangers surrounded him – interrogations, friendly fire, forced to walk from one POW camp to another – a perilous journey until his liberation by Allied forces.

But the years in WWII do not fully define Dr. Brown. His many successes after the war illustrate his passion for education and community service. Dr. Brown went on to earn a Ph.D., retiring from Columbus State Community College as Vice President of Academic Affairs.

These remarkable experiences are the subject of “Keep Your Airspeed Up”, a book co-authored with Dr. Marsha Bordner, Dr. Brown’s wife, and also an education professional, who retired as president of Terra Community College in Fremont, Ohio.

“This is the story of a genuine American hero, and the Tuskegee Airmen were exactly that,” said Dr. Bordner. “The book is an in-depth look at Harold’s life – his ancestors, his life before flight training, the war years and his later accomplishments. There’s much to learn from his life. His time in the Strategic Air Command during the Cuban Missile Crisis, his time in the education system, and other life experiences will serve as an example of how one can persevere in a world not friendly or accommodating to their dreams.”

Dr. Brown still graciously volunteers his time to share with others the important history of the Tuskegee Airmen, speaking to groups around the country. “If I accepted every request to speak, I’d be busy seven days a week!” said Dr. Brown, chuckling at the prospect. “I still get out there because it’s essential to reach children and let them know that they all face problems, but they should never give up. There are a lot of parallels to the Tuskegee Airmen, and we need to help them understand that.”

To Dr. Brown, you are our kind of celebrity and we admire your bravery and accomplishments. Your life’s service and work continue to be an inspiration to us all; we appreciate your enthusiasm to help the CAF Red Tail Squadron share this important piece of American history.

In 2020 Dr. Harold Brown, was inducted into the Minnesota Aviation Hall of Fame. Brown and his wife, Dr. Marsha Bordner, also received recognition as Writers of the Year for their book, “Keep Your Airspeed Up: The Story of a Tuskegee Airman,” a detailed account of Brown’s experience as one of the country’s first black military aviators. 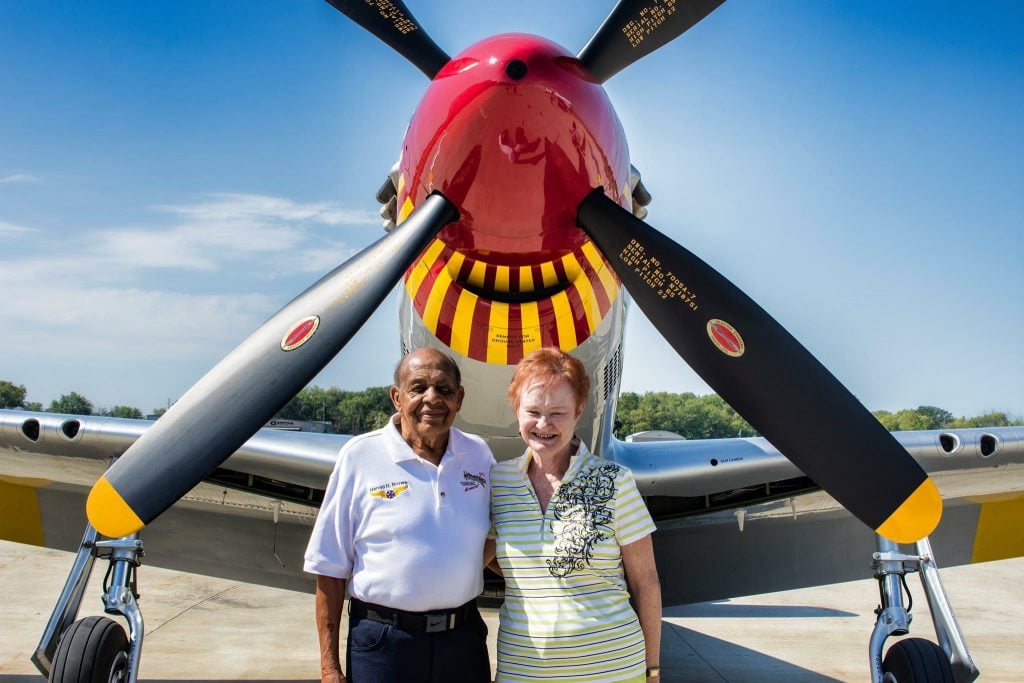 To Dr. Brown, you are our kind of celebrity and we admire your bravery and accomplishments. Your life’s service and work continue to be an inspiration to us all; we appreciate your enthusiasm to help the CAF Red Tail Squadron share this important piece of American history. 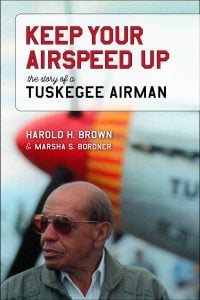 Get your copy of “Keep Your Airspeed Up: The Story of a Tuskegee Airmen” in the CAF RISE ABOVE store!