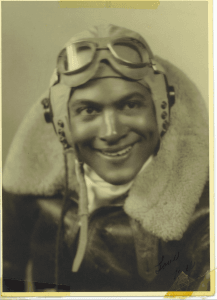 William Bethel Morgan Jr. was from Wyano, Pennsylvania (Westmoreland County), a small coal mining community. His father was William Bethel Morgan, Sr., a coal miner, and his mother was Susie Harris Morgan a farmer. When he was just 8, in 1929, his father died in a Wyano coal mining accident. Young Morgan and his mother moved onto a farm in Yukon, Pennsylvania as the only Black family in town.

He worked the farm, attended Homestead High School, played football, and played the guitar. The community eventually supported him and his mother. Yukon was where he spent most of his young adult life as a farmer, traveling to his job as a chipper in the Pittsburgh Steel Foundry.  His mother wanted him to be a Raleigh salesman or a schoolteacher. He tried the Raleigh job, however door-to-door sales were too frustrating for him. In 1942 while Morgan was working in a steel mill, he read an article in the Pittsburgh Post-Gazette newspaper about the Tuskegee Institute where young Black men trained to be fighter pilots.

He volunteered for the service in 1943 and after a long battery of tests, managed to get “in-line” as a pre-aviation cadet in 1944. He waited a year for a class to be formed. Even though his grades in high school were very good, the tests were very hard. Only 35 out of 537 made it into flight training, Morgan was one of them. The service was actually the first experiences he got to be around other blacks. He said the experience was incredible. He would say “I learned a lot about life after meeting the cream of the crop of the black race. I saw what we could make of ourselves.”

He began training in Mississippi earning his wings in PT-19s and PT-13s He later learned combat techniques in AT-6 trainers and later moved to gunnery training off the Florida coast in AT-6s and the P-51s. As a flight cadet he was not only prepared to fight the enemy overseas, but the enemy at home.  Morgan was a member of the last class to graduate from the Tuskegee Institute on September 8, 1945, and was one of the last to be assigned as a replacement to the 332nd fighter group, the Red Tails; Class SE 45-F. He graduated as a Flight Officer.  He never got to see combat. The war was over before he could be assigned to his unit.

After he left the service, he spent time in Atlanta and New York. Morgan enrolled in dental school at the University of Pittsburgh, as one of only 4 Black students, earning his DDS degree in 1957. Soon after, Dr. Morgan purchased a dental practice from a white dentist in the Hill District of Pittsburgh, PA. As his practice grew, he opened a satellite office in Braddock, Pennsylvania. He practiced dentistry for a little over 10 years in the Pittsburgh area. Not liking the politics and the racial tension in the city in the late 60’s, Dr. Morgan moved his family (Martha his wife, and two children Bill and Susan) to Wanamingo, MN, a Scandinavian community of 500 people.

Like many people – then and now – Dr. Morgan’s two children did not learn about the Tuskegee Experience in their schooling and although their own father had been a part of this groundbreaking group, they didn’t fully understand the impact of that until reaching college and delving into black history at a deeper level. The Morgan family had always lived in rural areas with very little black population or exposure to black history, and Dr. Morgan wanted his children to make their own decisions about the issues of race, unfettered from his own experience. 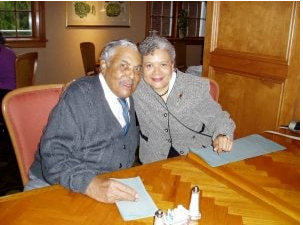 Dr. Morgan and his daughter, Susan

“He was humble. He just wanted to be a pilot,” says Susan Morgan, the second of Dr. Morgan’s two children. “For him, discrimination was a part of the process. He was doing what he wanted to do, not thinking about the impact it would have on black history. He knew that whatever environment you were in, you can overcome those barriers.”

Ms. Morgan says that her father helped her to erase prejudicial barriers and preconceived ideas because he didn’t let the difficult things he experienced impact his or his family’s life. She is grateful that he gave her the freedom and ability to figure out delicate issues like race on her own and make her own judgments.

“Dad never impressed his experience on us, but being a Tuskegee Airman broadened his understanding and impacted our family,” she shared. “The Airmen were more than pilots – they were pursuing a dream and living a life. And today that message of perseverance, to follow your dreams, is still important.”

On behalf of the CAF Red Tail Squadron, we salute Dr. William Morgan for his service to our country, and for continuing to be an inspirational figure for generations to come.