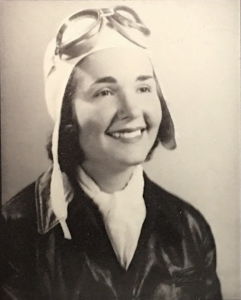 The following is excerpted from Marie Barrett Marsh, A Biography by her husband John E. Marsh.

Marie Barrett Marsh was born December 3, 1919, a daughter of Marie Lawlor and John P. Barrett. When her parents split in 1931, Marie spent a year living with an aunt in Chicago which greatly influenced her young life offering her many cultural and social opportunities. She returned to live with her mother and attended the Rayen School and Youngstown College. While at Rayen she received a $25 award for writing the best senior essay on the history of Ohio.

During the summer of 1940, Youngstown College, in cooperation with Bernard Airport, offered Civilian Pilot Training in which Marie enrolled – one of two girls in the class of 29 students. The course was funded by the U.S. Government and consisted of ground school courses necessary to pass the written exam, plus 35 hours of flying time to pass the flight test in order to obtain a Private Pilot’s License. Following this course, she took Secondary CPT, which included aerobatic instruction in an open cockpit biplane.

After graduating from college in 1941, Marie had a teaching contract in Mecca, Ohio. She taught math, general science, shorthand and typing. After completing a year of teaching at Mecca, she was hired by Dr. George Bowman, Superintendent of Schools in Youngstown, on a teaching contract. She worked in the Superintendent’s office until May of 1943 when she entered flight training at Avenger Field in Sweetwater, Texas.

The WASP Program
Marie graduated in November, 1943, class 43-W-7 as a W.A.S.P. (Women Air force Service Pilot). The WASP women pilots each already had a pilot’s license. They were trained to fly “the Army way” by the U.S. Army Air Forces at Avenger Field Airport Sweetwater, Texas. More than 25,000 women applied for WASP service, and less than 1,900 were accepted. After completing four months of military flight training, 1,078 of them earned their wings and became the first women to fly American military aircraft. Except for the fact that the women were not training for combat, their course of instruction was essentially the same as that for aviation cadets.

After training, the WASP were stationed at 120 air bases across the U.S. assuming numerous flight-related missions, relieving male pilots for combat duty. They flew sixty million miles of operational flights from aircraft factories to ports of embarkation and military training bases, towing targets for live anti-aircraft artillery practice and simulated strafing missions, and transporting cargo. Almost every type of aircraft flown by the USAAF during World War II was also flown at some point by women in these roles. In addition, a few exceptionally qualified women were allowed to test rocket-propelled planes, to pilot jet-propelled planes, and to work with radar-controlled targets. Between September 1942 and December 1944, the WASP delivered 12,650 aircraft of 78 different types. Over fifty percent of the ferrying of combat aircraft within the United States during the war was carried out by WASP pilots.

Marie was assigned to the headquarters of the Weather Wing of the Army Air Force in Asheville, North Carolina. Their duties included being pilots for the non-flying top brass in the Weather Wing, with flights to Army weather stations all over the U.S., courier service to the Pentagon, “mercy flights,” and flight testing the aircraft at the base after repair.

In 1944 Marie resigned from the WASP, as the need for pilots had drastically decreased. She married her high school sweetheart, John Marsh on June 27, 1944 and raised eight children in Vienna, Ohio. Marie kept her pilot’s license current, and several of her children became involved with aviation. Marie was diagnosed with inoperable lung cancer in 1996 and died in April of 1997. Two of Marie’s grand-children inherited their love of flying from their grand-mother.  They are now airline pilots.

In 1999, Marie was inducted into the Ohio Women’s Hall of Fame

The WASP Legacy
All records of the WASP were classified and sealed for 35 years, so their contributions to the war effort were little known and inaccessible to historians. In 1975, under the leadership of Col. Bruce Arnold, son of General Hap Arnold, the WASPs fought the “Battle of Congress” in Washington, D.C., to belatedly obtain recognition as veterans of World War II. They organized as a group again and tried to gain public support for their official recognition. Finally, in 1977, the records were unsealed after an Air Force press release erroneously stated the Air Force was training the first women to fly military aircraft for the U.S.

This time, the WASP lobbied Congress with the important support of Senator Barry Goldwater, who himself had been a World War II ferry pilot in the 27th Ferry Squadron. President Jimmy Carter signed legislation #95-202, Section 401, The G.I. Bill Improvement Act of 1977, granting the WASP corps full military status for their service. In 1984, each WASP was awarded the World War II Victory Medal. Those who served for more than one year were also awarded the American Theater Ribbon American Campaign Medal for their service during the war.

On July 1, 2009 President of the United States, Barack Obama and the United States Congress awarded the WASP the Congressional Gold Medal. Three of the roughly 300 surviving WASPs were on hand to witness the event. During the ceremony President Obama said, “The Women Airforce Service Pilots courageously answered their country’s call in a time of need while blazing a trail for the brave women who have given and continue to give so much in service to this nation since. Every American should be grateful for their service, and I am honored to sign this bill to finally give them some of the hard-earned recognition they deserve.”

On March 10, 2010, 200 surviving WASP arrived at the US Capitol to accept the Congressional Gold Medal from House Speaker Nancy Pelosi and other Congressional leaders.

Visit the Rise Above: WASP Virtual Museum to see her Congressional gold medal displayed at the Air Force museum in Dayton, OH.