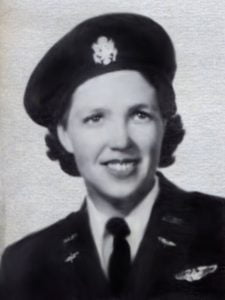 Her first flight was “more or less on a dare” with her husband, Joe Harrison. She and Joe met near Newburgh, New York and traveled all over the United states, working at approximately 20 major newspapers.

After soloing and receiving her private pilot license, Edna applied for and was accepted into the Army Airforces Flight Training program at Avenger Field, Sweetwater, Texas. She entered the WASP as a member of class 44-6, and graduated in the summer of 1944. She was stationed at Buckingham Army Air Base, Fort Myers, Florida, where she flew the B-26 Martin Marauder (twin engine bomber) as a tow target pilot until the WASP were disbanded in December of 1944.

After deactivation, she returned to the printing trade as a line type operated, continuing flying on the side until 1952. Her husband, Joe, died in 1954.

Edna remarried in July 1964 to Ewing M. Atkins of Rossville, Georgia. She and her new husband moved to St. Cloud, Florida in 1988. Ewing died in November of 1996.

Like so many WASP, Edna served her country–doing what needed to be done–and then returned to her life before WWII. She is one of those who sacrificed much that we all might be free. God bless Edna — and God continue to bless the country that she served.

Posted by Nancy Parrish–from p. 407, WASP Betty Turner’s “Out of the Blue and Into History.”