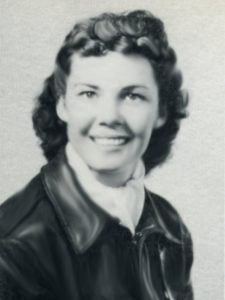 Edna was born in Rockey, OK on Leap Year’s day, 1916 and attended public school there. Her maternal grandfather was a participant in the original Oklahoma land rush. Her immediate family moved to California first to Bakersville and then to Livermore.

As a young woman Bishop took flying lessons in Bishop, California. She saved her money and usually could only afford a fifteen-minute lesson. She was able to fly solo after only seven hours of lessons, ultimately buying a small Aeronicia and flying out of Bishop California to build time.

She learned about the Women’s Airforce Service Pilots while waiting for a job interview with a shipbuilding business in Terminal Island, California. The woman sitting next to her in the waiting room was reading a newspaper about the newly organized WASP in Phoenix, Arizona. Bishop made up her mind and drove to Phoenix, where she acquired the 200 minimum hours of flight experience to join the WASP. 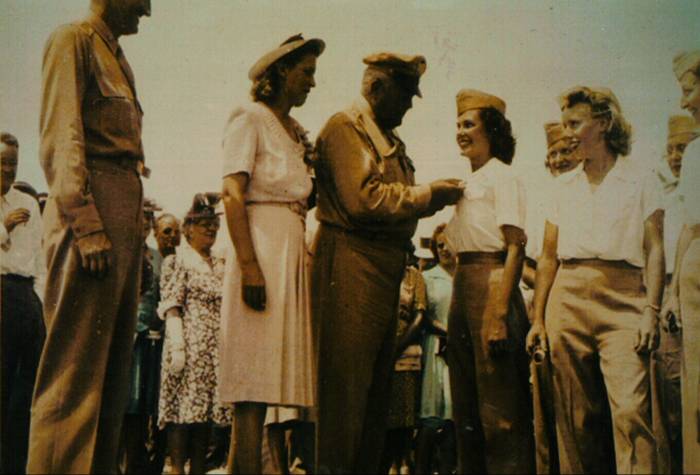 In 1944, Bishop was at Liberty Field in Hinesville, Georgia. It was there that she met her husband, James, who was also a pilot. They were married in December 1944 and had four children together.

Bishop and her husband came to Hattiesburg because James was working in the Advertising Department of the Hattiesburg American newspaper. He also taught advertising in the Journalism Department at the University of Southern Mississippi.

Although she didn’t make an issue of the deactivation, she did feel it was an injustice and through the years sought some sort of recourse. She was signally happy when WASP were awarded militarization and appreciative of Mississippi’s U.S. Congressman “Sonny” Montgomery’s active participation in the process.

This wasn’t her sole passion, however. She finished her college degree at the University of Southern Mississippi and entered their graduate program earning her teaching specialist degree and then entering the PhD program at the University of Alabama. She taught several years in the U.S Teacher Corp, later joining the faculty of Prentiss Junior College. She worked both publicly and privately in testing students, publicly in Hattiesburg, MS., New Orleans and Bogalusa LA.

She formed a newcomer service in Laurel, MS and later was employed with the Mississippi Employment Service. She was active in civic affairs including serving as a Girl Scout Leader in both Laurel and Hattiesburg. She was a devoted member of First Baptist Churches of Laurel and Hattiesburg and later, University Baptist Church of Hattiesburg. She worked in various area of these churches and served in a number of church committees.