One of the 13 founders of the Ladies Professional Golf Association (LPGA), Congressional Gold Medal awardee for her service as a Women Airforce Service Pilot (WASP) in World War II, and first female announcer for professional baseball.

Helen was born in 1914. Growing up in a family of golfers in the Washington, D.C. area, Helen Detweiler graduated from Trinity College with degrees in history and English and headed to Florida to launch a golf career with money her grandmother gave her as a graduation present.

Detweiler won the first tournament she entered, capturing the 1939 Women’s Western Open as an amateur. Later that year, she joined Wilson Sporting Goods as a staff professional, along with fellow future LPGA Tour co-founders, Opal Hill and Helen Hicks. Patty Berg would follow in 1940. 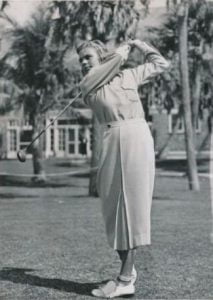 Dettweiler tees off at Palm Beach in 1937

The Washington, D.C. native was instrumental in getting the Women’s Professional Golf Association off the ground in 1947, later serving as the vice president of the LPGA when it was formed in 1950. Detweiler was one of 13 players who co-founded the association.  These trailblazers created one of the most successful women’s sports organizations in history and were dedicated to golf as a game and a career. They “did it all” back then: planned and organized the golf tournaments, drafted the by-laws, supervised membership, set up the courses, and much more.

Women’s golf struggled to gain footing in the wake of World War II. During the war years, Detweiler became a cryptographer, eventually training signal decoders throughout the nation. From 1943-44, she joined the Women Airforce Service Pilots (WASP), who were the first women to fly planes for the U.S. military. She wrote the “History of Women in the Air Force” during the War. She was one of 17 women who flew B-17 bombers.

Seemingly always in the right place at the right time, Detweiler played golf with the owner of the Washington Senators Major League Baseball team in Washington, D.C. He arranged for her to work as the “Voice of the Senators” for a year as the team’s play-by-play broadcaster. In 1938, she was called “The Girl of Summer” when she became the first woman to broadcast professional baseball, according to The Sporting News.

While she was there for the LPGA’s beginning, Detweiler left the tour in the early years to teach golf, returning to California to become the head professional at Indian Palms. She also taught for seven years at Thunderbird Country Club in Rancho Mirage, California, often teaching golf to the stars of Hollywood, and later at El Dorado Country Club in Indian Wells, California, where she instructed President Dwight Eisenhower.

According to one fellow LPGA professional, PGA star Ben Hogan once called Detweiler “the best teaching pro there ever was.” She was honored for that talent in 1958, as the first LPGA Teacher of the Year.

She was friends with Jackie Cochran, a pioneer American woman aviator, who married the CEO of RKO in Hollywood — then considered one of the world’s wealthiest men. Detweiler and Cochran designed a nine-hole golf course on the Cochran ranch in Indio, California, that is now Indian Palms Country Club, a 27-hole facility.

Detweiler retired from teaching golf and opened an apparel store in Palm Springs, California. She died of cancer in 1990, at age 71, after a life of many adventures.

Posthumously, she received a Congressional Gold Medal for her World War II service.