She was a 1936 graduate of The Park School and obtained a bachelor’s degree in English in 1940 from Wellesley College in Massachusetts, where she also studied journalism and played field hockey.

It was a case of sibling rivalry with her brother, John Hartz, that led the young 20-year-old woman to study and obtain her pilot’s license in December 1942 at the old Curtis-Wright Airport in Northwest Baltimore. Today, Greenspring Shopping Center occupies the site of the former 250-acre airport.

“My brother, who was three years younger than I was, took flying lessons at the Curtis-Wright field in Baltimore. I was very competitive,” she told the Library of Congress in a 2016 interview for its Veterans History Project. “I told my father he was paying for my license, too! So, I went out to the field and got my civilian pilot’s license.”

When the Library of Congress asked what she liked about flying, she replied, “Oh, the thrill of it.”

The Women Airforce Service Pilots group — better known as WASP — had its roots in the Women’s Auxiliary Ferry Squadron and Women’s Flying Training Detachment, founded in 1942 after the outbreak of World War II. They had been formed by Jacqueline “Jackie” Cochran and test-pilot Nancy Harkness Love, and allowed women to fly non-combat missions, thus freeing male pilots for combat duty.

In 1943, the two organizations merged to create the WASP with the support of Army Air Forces Commanding Gen. Henry H. “Hap” Arnold and First Lady Eleanor Roosevelt. The service was attached to the then-Army Air Force.

Mrs. Carroll “auditioned” for the service, and while waiting to be called up worked as a secretary for Pan American Airways at New York City’s LaGuardia Airport.

Some 25,000 women had applied, and 1,830 women were accepted. Only 1,074 completed training. She completed her training at Avenger Field in Sweetwater, Texas, now the site of the National WASP World War II Museum.

“I’m glad now I decided to take up flying,” she told The Evening Sun in 1944. “I’d like always to fly and after the war have a plane of my own.”

“Miss Hartz… ferries trainers and larger ships to various points throughout the eastern section of the country and Canada,” reported The Evening Sun.

“I was given the rank of co-pilot on B-24s,” she told the Library of Congress. She achieved the rank of lieutenant and squadron leader. “In the Ferry Command, you had to be versatile. In other words, whatever orders came through, that was the plane you were to fly. One minute you might have an itty-bitty plane and the next time you’d have four engines.

“You’d never know when you went out, what was going to happen…. You had to go by orders; you had no choice in the matter,” she said.

Mrs. Carroll told The Evening Sun that trips ranged from a day or two a month, and depended on the weather, the length of the trip and the speed of the plane. When flying trainers, the WASPs flew alone, but when it came to larger planes such as bombers, there was always a pilot and copilot.

“I like to fly alone, but I also like to copilot because there is so much to learn on the larger planes,” she said.

She explained in the Library of Congress interview that there was some prejudice by male pilots against women pilots and that they “could be very snippy with us.”

“We WASPs take a lot of good-natured kidding about our name from the men in the command,” she said in The Evening Sun interview. “And we get kidded about our piloting the same way women drivers are teased about their driving.”

She said it was Ms. Cochran who pushed for the women to get uniforms. In the beginning they wore one-piece “floppy fatigues” they called a “zoot-suit.” They also wore fleece-lined leather jackets, the same as male pilots. The uniform they later came to wear consisted of navy blue pants or a skirt, worn with navy blue shoes with no heels and a small hat that resembled a beret.

“Our uniforms aren’t as familiar to the public as those of other women’s services, and in hotel lobbies people are always mistaking us for bellhops and elevator operators and on the street for bus drivers,” she told The Evening Sun.

During her two-year career as a WASP, Mrs. Carroll never lost a plane. She did have to make an emergency landing once after an airplane’s engine caught fire and died during a training flight over Connecticut. She was able to safely land at LaGuardia.

“I got down alright,” she recalled. “I was a cautious pilot though; I didn’t have any trouble because I was cautious.”

The WASP was disbanded in December 1944.

“The WASP has completed its mission. Their job has been successful,” said Gen. Arnold in a speech at the time at Avenger Field. “But as is usual in war, the cost has been heavy. Thirty-eight WASP have died while helping their country move toward the moment of final victory. The Air Force will long remember their service and their final sacrifice.”

In 1945, she married Charles Rivers Carroll Jr., an Army sergeant who also had his pilot’s license.They moved to Baltimore in the late 1940s, and later lived in Homeland and Guilford.

After the war ended, Mrs. Carroll worked for Hawthorn Flying Service as an executive pilot for about a year, then abandoned the skies after becoming pregnant with her first child.

She worked for more than 40 years as department administrator of physics and astronomy at the Johns Hopkins University, until retiring in 1993.

When Gen. Arnold sought to have the WASP designated as members of the U.S. military in 1944, he was rebuffed by Congress. It wasn’t until 1977 when President Jimmy Carter signed a law giving them full military status.

In 2009, Mrs. Carroll and the WASPs were awarded the Congressional Gold Medal. 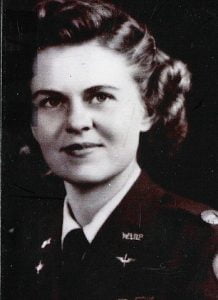