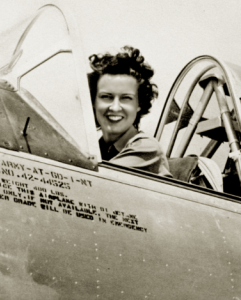 “Having friends and a belief system… Knowing that it’s gonna be OK. There is something greater than us watching over us.” – WASP Elizabeth “Betty” Whitlow Smith on getting through tough times.

Betty Whitlow Smith was born in Pine Bluff, Arkansas in December 1920. From as early as she could remember, airplanes fascinated her. She felt drawn to the sense of freedom and space she felt when she looked up.  As a young girl, Betty covered her bedroom walls with aviation pictures, including a magazine ad featuring an airplane silhouette along with a bottle of perfume.

During her sophomore year at the University of Tulsa, the 19-year-old psychology major, was given the opportunity to fly in the Civilian Pilot Training Program (CPTP).  Betty became one of two women surrounded by 18 men in the government sponsored program, eventually earning her pilot’s license.

Once she soloed, Betty’s first passenger was her mother, Mary. Soon, Betty became 1/4 owner of a Piper Cub and continued flying while working at Douglas Aircraft in Tulsa, inspecting equipment on modified B-24’s.

Once she had accumulated the required 200 hours, she was accepted into the WASP training program and entered training at Houston Municipal Airport (now Houston Hobby) as a member of the second class. After graduation she was stationed with the 5th Ferrying Group, ATC at Love Field in Dallas.

While serving as a WASP, Betty started out ferrying PTs, BTs, and AT-6s. Graduating from pursuit school was her next accomplishment, which led to ferrying the P-51, P-40 and P-47. With Betty’s passion for aviation and a challenge, it’s no surprise that she also completed Officers Training School in Orlando, FL.