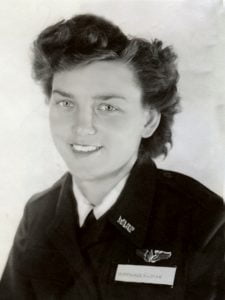 Eloise was a native Texan, born in 1921 near Richardson, Texas, just outside of Dallas. She was a graduate from Richardson High School class of 1938 and attended TSCW (currently TWU)

Hers was a family of pilots.  Eloise had no choice — she was a country girl from Texas who was born to fly.

When she had enough hours, she applied for and was accepted into the WASP training program at Avenger Field in Sweetwater, Texas on November 1, 1943. There she learned to fly the Army Air Forces military aircraft, always wearing her favorite boots.

After successfully finishing seven months of training at Avenger Field, she graduated, received her silver wings and her official orders from the Army Air Forces to report to Maxwell Field in Montgomery, Alabama, which was a B-24 repair depot.  Eloise and her classmate, Millie Davidson (Dalrymple), drove to Maxwell, arriving on “D Day”, June 6, 1944.  They were billeted in the Nurses’ Quarters across from the Officer’s Club.

While at Maxwell, which her friend, Millie, called “a paradise compared to Avenger”, Eloise was able to check out on a number of aircraft, including the B-24, which she flew as an engineering co-pilot.    Her primary flying assignment was on slow-timing missions to ‘break in’ rebuilt or new engines on the B-24s.   She was also able to qualify as first pilot on the UC-78, AT-11 and C-45.

When the WASP were disbanded, she packed her bags and paid her way back to her favorite place in all the world —TEXAS.   She probably didn’t pack her boots.  She was probably wearing them!

In 2010 on Veteran’s Day, Eloise was one of 31 Texas women honored in March with a group Congressional Gold Medal for her World War II service as a member of the Women Airforce Service Pilots.

Her wartime contribution and that of her fellow WASPs were not officially recognized until 1979, when the women were granted veteran status. In March, they were awarded the Congressional Gold Medal.

“She loved flying,” said her son Ted Kenneth Bailey Jr. of Carrollton. “When she got out of the service, she missed it so much.”

Although Mrs. Bailey didn’t get many opportunities to fly after the WASPs were deactivated in December 1944, she kept her passion for aircraft.

“She loved going around to air shows,” her son said. “She would point out the planes she had flown.”

Eloise took her last flight on October 6, 2010.  She is now flying higher than she has ever flown.