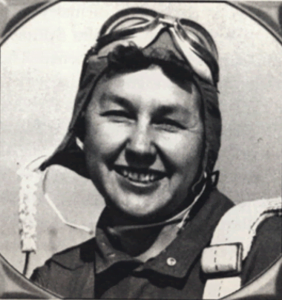 Esther Gebert Nelson spent World War II flying B-25 bombers and P-51 Mustangs across the country. Nelson was one of the first members of the Women’s Auxiliary Ferrying Squadron — later known as the Women Airforce Service Pilots — who performed a vital role during the war by ferrying military aircraft throughout the nation to free male pilots for combat duty.

The war work turned out to be a family affair as her husband, Arthur C. Nelson, did similar flying as a 43-year-old Army lieutenant. Before the war, the couple owned a flight school at what today is Ontario International Airport.

Esther Nelson, born in Kern County and a graduate of Los Angeles High School, became fascinated with flying as a 21-year old after taking a lesson from Arthur Nelson in North Hollywood in 1930.

Their mutual interest in aviation led to their marriage in Yuma, Arizona, in 1936. Even the honeymoon was centered around flying. They bought a new plane in New York but a day later enroute to visit Arthur’s parents, the engine failed and it crashed. No one was injured but it added a rather memorable moment to their trip.

In 1938, they opened Nelson Flying Service at the small Ontario Municipal Airport where they trained many fliers, about 300 of whom would later fly for the military during the war. Meanwhile, Esther continued improving her flying skills and in 1941 became only one of 10 women in the nation licensed as a flight instructor.

But once Pearl Harbor sent the nation into war, the Nelsons decided they wouldn’t spend World War II as spectators. They soon sold their flight school facilities to Chaffey College for use in its aviation courses.

Arthur joined the Army’s Air Transport Command in Long Beach and later served in Dallas while the 33-year-old Esther was invited to join the Women’s Auxiliary Ferrying Squadron because of her instructor certification and 532 flying hours. 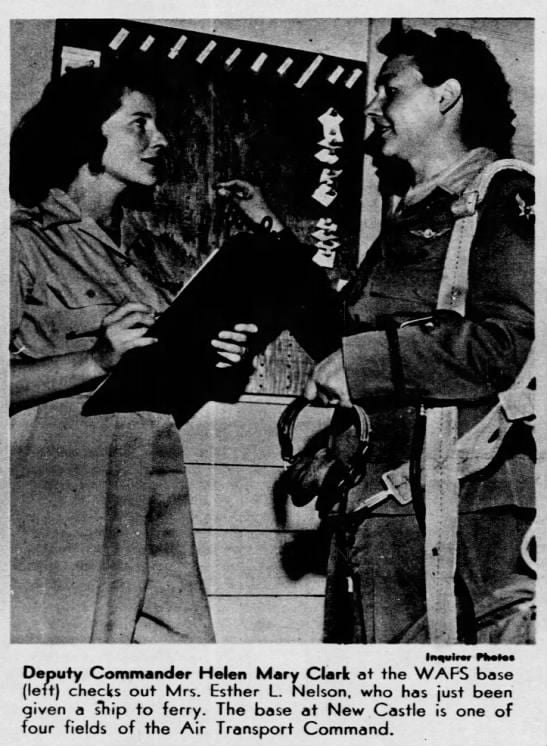 She was one of the first 28 to undergo a four-week training session in Newcastle, Delaware, being prepared to serve the military though hired as a civil service employee for $3,000 a year. Esther would eventually be trained to fly 11 different U.S. aircraft, from small trainers to large multi-engine aircraft, ferrying them from aircraft plants to where they would be shipped for service in Europe or the Pacific.

But it wasn’t easy for the female pilots who faced constant prejudice from those unwilling to believe a woman could be as good a flier as a man.

— who were the most experienced pilots in the WAFS — flew a B-17 bomber from Maine to Labrador and were preparing to take it across the Atlantic to England. Once Gen. Henry “Hap” Arnold heard the flight was to be flown by two women, he immediately ordered them out of the plane, replacing them with men. Women were limited only to domestic flights during the war.

News articles of the time about the women fliers were always laced with a condescending tone, usually referring to attributes other than their flying skills. “Trim, shapely, photogenic” was their description in a Sept. 28, 1942 article in the Los Angeles Daily News. The article labeled them as “Ladybirds.”

When Esther and several other pilots delivered aircraft in North Carolina that November, the Charlotte News reported they had “left the gay life of society for the hazardous and trying business of flying newly completed planes about the country.” She was featured in a Los Angeles Times article on Jan. 10, 1943, in which she and her fellow fliers were referred to as “girls” throughout.

And there were logistics problems, “We were the first to participate in coed barracks,” recalled Delphine Bohn, a Women’s Auxiliary Ferrying Squadron member in Dallas. “We were the users of johns which were guarded by armed (security). Needless to say, there was no hanky-panky.”

By early 1944, the Women Airforce Service Pilots program was ferrying about 70% of the single and twin-engine planes in the nation. All the women were instrument- rated, most were trained for twin-engine planes and fighters. But in 1944, with the war still a year from completion, the WASP program was suddenly eliminated, despite pleas to keep it going. Male pilots who had been wounded or had completed their combat duty were put to work ferrying planes.

Esther returned to Southern California, where after the end of the war, she and Arthur divorced. She later became a captain in the Air Force Reserve and was granted veterans status in 1977.

She married Emerson Carpenter in 1965 and lived most of the rest of her life in Laguna Hills. She died on Feb. 21, 1991, and is buried at Riverside National Cemetery.

An article, “Women With Silver Wings,” written in 1978 for the newsletter of the 99s (an organization of women fliers that dates back to Amelia Earhart), offered the belief that males would eventually accept the skills of women fliers.

“Once the initial ‘shock’ of seeing a woman step out of a pursuit plane or bomber was over, it was only a matter of time before male pilots had to admit that the aircraft didn’t know a woman was flying.”