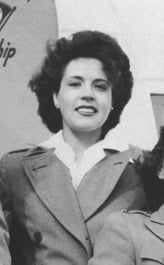 In one reference, a WASP Ruth Adams was flying as copilot with Esther in a UC-78. Just after take-off, Ruth notices smoke from under Esther’s seat. They followed standard emergency procedures and landed safely in a farm field. Later evidence was found that some insulation on wiring for the landing gear had burned.

In another reference, she is pictured with Nancy Love and three others and they are all referred to as “squadron leaders.”

Soon after joining the WAFS, Esther got married. By late winter, pregnant and wearing her topcoat all the time to cover up her condition, she flew until it was difficult for her to get the stick back in the PT-19s and other small planes she was ferrying. By the end of April 1943 she was grounded, but rather than releasing her from duty and therefore from the WAFS, C.O. Betty Gillies – who needed her squadron intact – put Esther on desk duty.

Dr. Esther Manning Westervelt, graduated from Vassar College in 1935 and received her doctorate from Columbia in 1961. She was an assistant professor of education at Teachers College of Columbia University, serving there from 1961 to 1969.

She was executive co‐director of the National Coalition on Women’s Education and Development from 1970 to 1972, alumnae professor at Simmons College from 1972 to 1974 and director of the MidHudson continuing education project at the State University at New Paitz in 1974‐75.