“Teaching had always been a woman’s profession and so consequently there wasn’t that much objection, and the men wanted to go to combat anyway.” Ethel Meyer Finley

Ethel Meyer Finley was born in Lake City, MN, and lived on a farm near there until graduating from high school in 1937. She earned a bachelor’s degree in science, mathematics and physical education from Winona State Teacher College, and she was the first woman at the school to participate in the Civilian Pilot Training program, training with renowned aviator Max Conrad.

Conrad offered her a job operating a link trainer, the forerunner to the simulator of today, which allowed pilots to establish aircraft instrument proficiency without leaving the ground.

She taught school for a year at a small high school in Rushford, Minnesota before she learned she could not earn a living and have enough left to fly planes, so she went to work operating the Link trainer at the airport in exchange for flying time.

In the winter of 1942, Ethel received an invitation to fly for the military and report to Chamberlain Field in 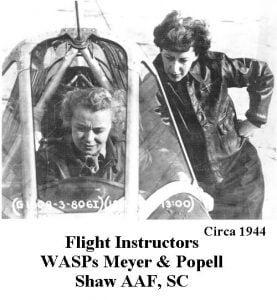 Minneapolis. In March 1943, she trained at Sweetwater, Texas, as she entered the fifth class and joined the Women’s Flying Training Detachment at Avenger Field. Ethel was stationed at Shaw Field in South Carolina and, for more than a year and a half, flew 12 different aircraft. She eventually flew as co-pilot transporting generals and other non-flying personnel, test-piloted planes after they were repaired, and taught pilots as part of a squadron of male instructors. In 21 months of active service, Finley logged a total of 1074 hours in the air before the WASP were disbanded in December, 1944.

Active in the WASP WWII organization, Ethel served as national president and as editor of WASP News. She served two terms as director of Region One, which includes Delaware.

While in the Army she met James A. Finley Jr., from Media, PA and Odessa, DE, and they were married in December, 1944 and had had two daughters and one son.

After moving to Rehoboth Beach Mrs. Finley again became active with the WASP organization. She served a variety of positions and continued to travel to national air shows and events throughout the country telling the story of the women aviators and encouraging young women to follow their dreams. She was president of the organization 1992-1994, during which time Congress granted the women veteran’s status.

She received the Delaware Trailblazer Award in 1995 and was named to the Delaware Aviation Hall of Fame in 2001. She was a member of the Board of Directors of Wright Flight Youth Program in Tucson, AZ, and served on the Dover Air Mobility Museum Foundation Board. For seven years through 2005, she organized the WASP activities at the Experimental Aircraft Association (EAA) Fly-In in Oshkosh, WI and the national Sun and Fun Air Show in Lakeland, FL.

In Delaware, Mrs. Finley remained active in the women’s affairs, serving on the Delaware Commission for Women and helping to establish Tau House and Houston Hall in Georgetown.

In 2006 she was inducted into the Minnesota Aviation Hall of Fame. She had been ill and was aware of this honor but passed before the ceremony. Her long-time friend, Tuskegee Airman Brigadier General Charles McGee, attended on her behalf.

Ethel passed away in February 2006.

We honor her service.