Extrapolating truth from fiction, and the truth is still pretty darn amazing! 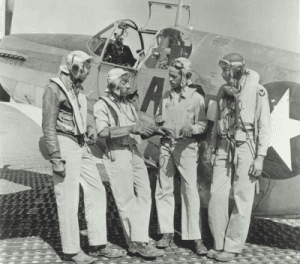 If you’re familiar with the Tuskegee Airmen then there’s probably a pretty fair chance you have heard it said that the group never lost a bomber on one of their escort missions during WWII. But logbooks and mission reports from the Airmen themselves, archived at Maxwell Air Force Base in Montgomery, Alabama, paint a different (and historically accurate) picture.

The Tuskegee Airmen did in fact lose bombers on their escort missions, but they lost significantly less than other fighter groups at the time. They truly were outstanding aviators and American heroes that will inspire us for generations to come, and honoring them should be done with respect paid to their true achievements.

But how did the original misinformation make the leap from legend to wide acceptance? Like many similar circumstances, it was a domino affect fueled by lack of information and hearsay. It was born of the best intentions and excitement over the Airmen’s groundbreaking role in our country’s history. But through the diligence of several historians, the historically accurate mission records are now finding their rightful place in museums and informational literature.

Dr. Daniel Haulman, chief of the Organizational History Division at the Air Force Historical Research Agency, is the author of several books about the famed fighter pilots, and co-author of the popular The Tuskegee Airmen: An Illustrated History, 1939-1949. His research and experience, at times working alongside the Tuskegee Airmen, Inc., has produced a roadmap of how the dominoes fell.

“Once a myth gets started, it’s hard to refute,” he says. “In March of 1945, when the Airmen were still flying missions, a journalist named Roi Ottley went to Italy to do a story for Liberty Magazine on the 332nd fighter group. Although the Airmen had already lost bombers, it was reported that they had not lost a bomber in 100 missions, which according to the records is not accurate.”

Ottley was a trailblazer in journalism at the time. He was a black man writing about black perspectives, speaking out on racial tensions and traveling abroad as a war correspondent. Unfortunately, he was criticized for being a “flawed journalist,” but his writings are nonetheless a pivotal piece of the WWII-era black history narrative.

This article led to another piece published in the Chicago Defender later that same month, printing that the Tuskegee Airmen never lost a bomber in over 200 missions. From there, the misinformation grew until it evolved into the myth that the Airmen never lost a bomber at all. Because the history of the Tuskegee Airmen had been underrepresented and obscure for decades, people were forced to rely upon word of mouth, and the misinformation was easily perpetuated.

Hollywood adaptations – although helping to bring much-needed awareness to the Airmen and their struggles – relied on dramatic fictionalizations loosely based on historical fact, further blurring the lines of truth and legend. The most recent film, “Red Tails” by George Lucas, is a bit closer to the historical belt, although strays in favor of entertainment. An interesting side note, Haulman was tasked to provide an accurate chronological timeline to the movie’s producers, which can be found in The Tuskegee Airmen: An Illustrated History, 1939-1949.

It’s important to keep in mind that historical misconceptions are not unusual. For example, there are still widely accepted myths about the mission that shot down Isoroku Yamamoto, the Japanese Marshal Admiral and the commander-in-chief of the Combined Fleet during WWII. Historians continue to search the records and put in the legwork necessary to ensure the accuracy of history lessons for generations to come.

“In the 179 escort missions flown by the Tuskegee Airmen, 27 bombers were lost,” says Haulman, who has painstakingly combed through the archives of the Airmen’s mission records. “In no way should this detract from their legacy. Other escort groups lost an average of 46 bombers on their missions.” For further information and a deeper dive, read Haulman’s paper, “52 Misconceptions About the Tuskegee Airmen”.

The inspirational legacy of the Tuskegee Airmen needs no embellishment. It remains as strong as ever, and their strength of character, courage and ability to triumph over adversity speaks for itself. We will forever be indebted to them for helping our nation win a war, and having the perseverance to create the path to equality for future generations.