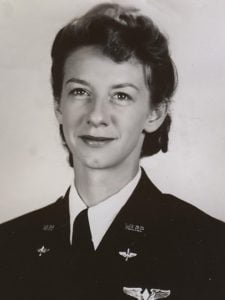 Frances was born in DuBois, Pennsylvania, on July 2, 1917, the fourth child and third daughter of Maude Elizabeth Baker Winter and Francis Ellis Winter. At an early age her family moved to Erie, Pennsylvania, where she lived until 1934 when she moved to Hot Springs, Arkansas.

She was educated at Hendrix college, Conway, Arkansas; Oklahoma College for Women (now known as Oklahoma University of Arts and Sciences at Chickasha, Oklahoma); and Louisiana State University where, at age 59, she earned a Master’s degree in Library Science. She lived in Shreveport, Louisiana for over six decades and in 2008 moved to Springfield.

During World War II Fran earned a pilot license and, completing all requirements, was accepted as one of the 103 trainees in WASP class 44-7.  September 8, 1944, after successfully completing over seven months of Army Air Force flight training, Fran and 58 of her classmates graduated, earned their silver WASP wings and became Women Airforce Service Pilots — the first women in history to fly America’s military aircraft.

Following graduation, Fran’s official Army orders sent her to Columbus Army Air Field, Columbus, Mississippi as part of the Flying Training Command’s 30th Army Air Force – 2112th AF Base Unit.  While there, she would have flown AT-10 flight testing missions as well as ferrying, utility and administrative missions. For that service, Fran and her WASP sisters were awarded the Congressional Gold Medal in 2010. It is the highest civilian honor Congress can bestow.

Following WWII, Fran married H.N. Kinney Brookings and they began their life together. From 1970 to 1982 she was employed by the Caddo Parish Schools (Shreveport, LA) as an English Teacher and Librarian. Fran was a member of North Highlands United Methodist Church (Shreveport, LA) and, more recently, High Street United Methodist Church. She was active in many civic, church, and philanthropic activities, including the United Methodist Women, P.E.O. Sisterhood, Women’s Auxiliary of the Springfield Symphony Orchestra, the Louisiana Retired Teachers’ Association, and Delta Kappa Gamma Sorority.