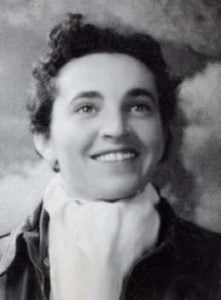 Frances was born in Deer Park, Maryland, but grew up with her two sisters in West Virginia. She was the No. 1 rank in the United States Lawn Tennis Association for the Middle Atlantic States, and she was awarded the most outstanding athlete, male or female, in the State of West Virginia in 1935. In that same year, she had won the women’s singles, doubles, and mixed doubles championship at the West Virginia Open.

She was a graduate of Morgantown High School, Morgantown WV, West Virginia University and the University of Pittsburgh. She later became a CPT instructor and member of the CAP before joining the WASP.

She had completed flight training at West Virginia University and also at the Southeastern University at the Martinsburg airport.

Frances entered WASP flight training at Houston Municipal Airport, Houston, Texas on January 15, 1943 and graduated at Avenger Field, Sweetwater, Texas, July 3, 1943. She completed her training as part of the class 43-W-3 on July, 3, 1943, and was designated a ferry pilot, assigned to Love Field in Dallas.  From there she served at Camp Davis, North Carolina, before arriving at Otis Field on December 15, 1943.

Her active-duty assignment was to the 5th FG/ATC at Love Field, Dallas, Texas.

On March 27, 1944, Frances was killed shortly after take-off from Otis Field. The aircraft was an RA-24B, (42-54552), the army’s version of the U.S. Navy’s SBD Dauntless dive bomber. Shortly after taking off, the plane developed engine trouble and dove into the ground.

She was 32-years-old at the time of her death.

Three other WASP pilots were also serving at Otis Field at the time: Shirley Ingalls, Mildred A. Toner, and Mary L. Leatherbee, acted as pallbearers at Miss Grimes funeral held at Camp Edwards.

This was the second fatal accident involving the same type of aircraft from Otis Field within three weeks. On March 3, 1944, another RA-24B (42-54555) crashed near the entrance of Woods Hole Harbor killing the pilot, 2nd Lt. Joseph H. Gardner, 29.