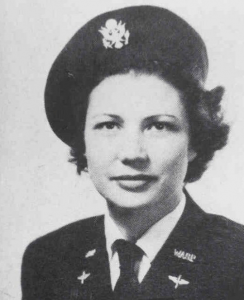 Frances Standefer wanted to fly, and she was willing to do whatever it took to make that dream come true.

In 1942, while working as a secretary at the Department of Transportation in Washington, D.C., Standefer was approached by Jacqueline Cochran regarding a nascent organization of female pilots established to assist the war effort. But there was a catch: You had to have a civilian pilot’s license to join.

“With every spare nickel she could save, mom traveled from Washington to Maryland every weekend to take flying lessons,” recalls Standefer’s son, retired Air Force Col. John Acker of Henderson, NV. “She was bound and determined to be one of ‘Jackie’s Girls.’”

Standefer, who died in 1987, helped train pilots from the Republic of China and pulled cloth targets so fighter pilots could hone their aerial gunnery skills, Acker says. It was potentially hazardous duty, he reports, noting: “Mom said there were days when she would come back with as many holes in the tail of her aircraft as the banner had in it.”

Acker acknowledges his mother’s military service inspired him to become an Air Force pilot in the late 1960s. During his junior year in college, he says, his mother hosted a WASP reunion at their home in Vacaville, Calif. “We lived next door to a restaurant called The Nut Tree that had its own airstrip, so several of the WASP who had their own planes flew in. When the ladies found out I was working on my pilot’s license, they took me up in their private planes, and I heard a lot of war stories. That solidified that I was on the right track.”

Acker attended the 75th anniversary celebration with his three sisters and will be donating more items from their mother’s war-era collection. Sadly, a flood in 1948 destroyed 95 percent of Standefer’s military memorabilia, but her dress blues survived and already are part of the museum’s permanent collection. Still to come are war-era issues of Life magazine featuring WASPs on the cover and related ephemera.

“It’s all a little overwhelming,” Acker says. “I know my mother would be standing proud and trying to get to the reunion if she was still alive. I’m really looking forward to seeing if any of the attending pilots were classmates of my mother’s. Just to meet them will be a huge honor for myself and my sisters.” 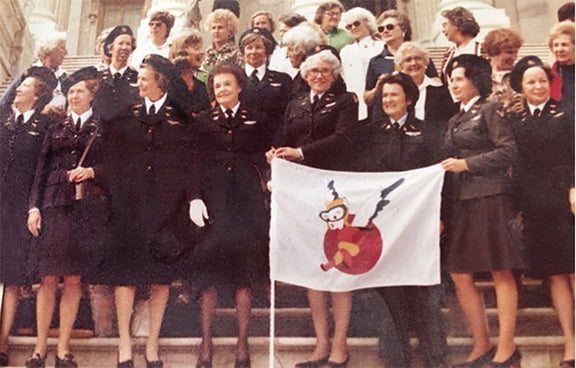 Members of the Women Airforce Service Pilots celebrate on the capitol steps in 1977 after the Senate voted on their military benefits.