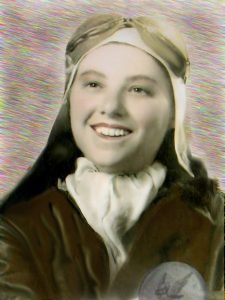 Frankie Inez Yearwood was, quite literally, the last WASP on record.

A member of the Women Airforce Service Pilots, an elite group of the first American women to fly in the military, Ms. Yearwood was among the program’s 1,074 graduates and a part of its last class. Because her name fell at the bottom of the list alphabetically, she was the last on the roster.

Although she was born and raised in Oklahoma, Ms. Yearwood considered herself a Memphian. After high school, she moved to Memphis and found a job building airplanes at Fisher Aircraft. From there she enrolled in a West Memphis flight school, which led to her military career.

The WASP program, which ran from 1942 to 1944, received over applications 25,000 women who applied but only 1,074 were accepted in the WASP. All of them were women with previous flying experience and pilot’s licenses. These women flew over 60 million miles in all kinds of military aircraft. In 1977, the organization acquired a veteran status, waiting until 2009 to be awarded with the Congressional Gold Medal

Her brother, Alfred Yearwood II, recalls that her short stature, at around 5-feet tall, nearly kept her from her goal.

“Frankie was a half-inch shorter than the minimum height requirement for the WASP program, but after a visit to a chiropractor, she was admitted,” he said.

After the war, Ms. Yearwood returned to Memphis, where she opened a camera and photo shop, Photos by Frankie. An avid photographer, she documented special events, including weddings and reunions, until retiring around 1980.