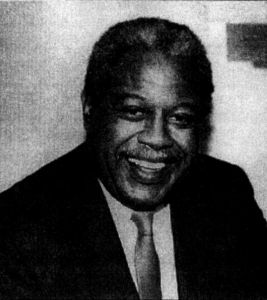 Dr. Frederick H. Black
One of the first weathermen for the Tuskegee Airmen

An Alumnus of Fisk University Dr. Black has earned two degrees in physics, an MBA and a doctorate in the arena of personnel from the University of Massachusetts.

As one of the African American pioneers in the Defense and aerospace industries, Dr. Black held a variety of positions including Field Installation Manager for Computers, Missile Assembly Building Manager, and Missile Flight Test Conductor.

His tenure at General Electric Company was marked by a tour in the Missile and Space Division as a marketing representative in Washington, D.C. and corporate manager of EEO/Safety and Security. Granted a leave, Fred served as executive director in Los Angeles of the Watts Industrial Park constructing and leasing one half million square feet of industrial space and employing 800 minorities. He subsequently retired as Manager of Special Interest Group Programs for General Electric’s Corporate Public Relations .

Dr. Black has served as a consultant to the Chief of Naval Personnel, U.S. Navy, and the President’s Domestic Council. During 1992 and 1993, Dr. Black served as pro bono Director of the National Newspaper Publishers Association and Foundation. He launched a “state-of-the-art” desktop publishing laboratory (the NNPA Student Ready Room) for youth in the nation’s capital.

The recipient of many awards and honors, Dr. Black has published several articles and holds memberships in numerous professional organizations. He is a diplomat of the American Personnel Society; board president of TRY US, a national minority business directory; president of Bethune Museum of Black Women’s History, and a member of the Richmond Arts Council’s Board.  He is also a trustee of Fisk University, and chairman of the Myerhoff Fund of Minneapolis, Minnesota, a foundation dedicated to placing minority college interns.

Magnetized by the Movement’s focus and lured by Whitney M. Young, Jr., Fred embarked on his many years of volunteer commitment to the National Urban League. He worked diligently as a member of the Commerce & Industry Council providing leadership and direction; he was instrumental in increasing the numbers of African American faculty and students placed through League programs in either summer assignments or permanent positions in the corporate world. Additionally, he made time to participate in the Black Executive Exchange Program.

Through his efforts, General Electric was the prime sponsor of the “Spouses Luncheon” for 15 years at the Annual Conference. Fred was also instrumental in helping to secure equipment for the Whitney M. Young, Jr. Training Center. An ongoing manifestation of Fred ‘s vision is the Community Express, mobilized seven years ago as a vehicle for the distribution of product giveaways by NUL Conference exhibitors to inner city residents.

In recognition of his manifold efforts, in 1984, he was one of the first recipients of the League’s Donald H. McGannon Award given to those who have been strong advocates in building solid and meaningful relation­ ships between the League and their companies.

Watch this YouTube video of Tuskegee Airman Frederick Henry, Black, Sr. as he talk about how the unit paved the way for the integration of the U.S. military.