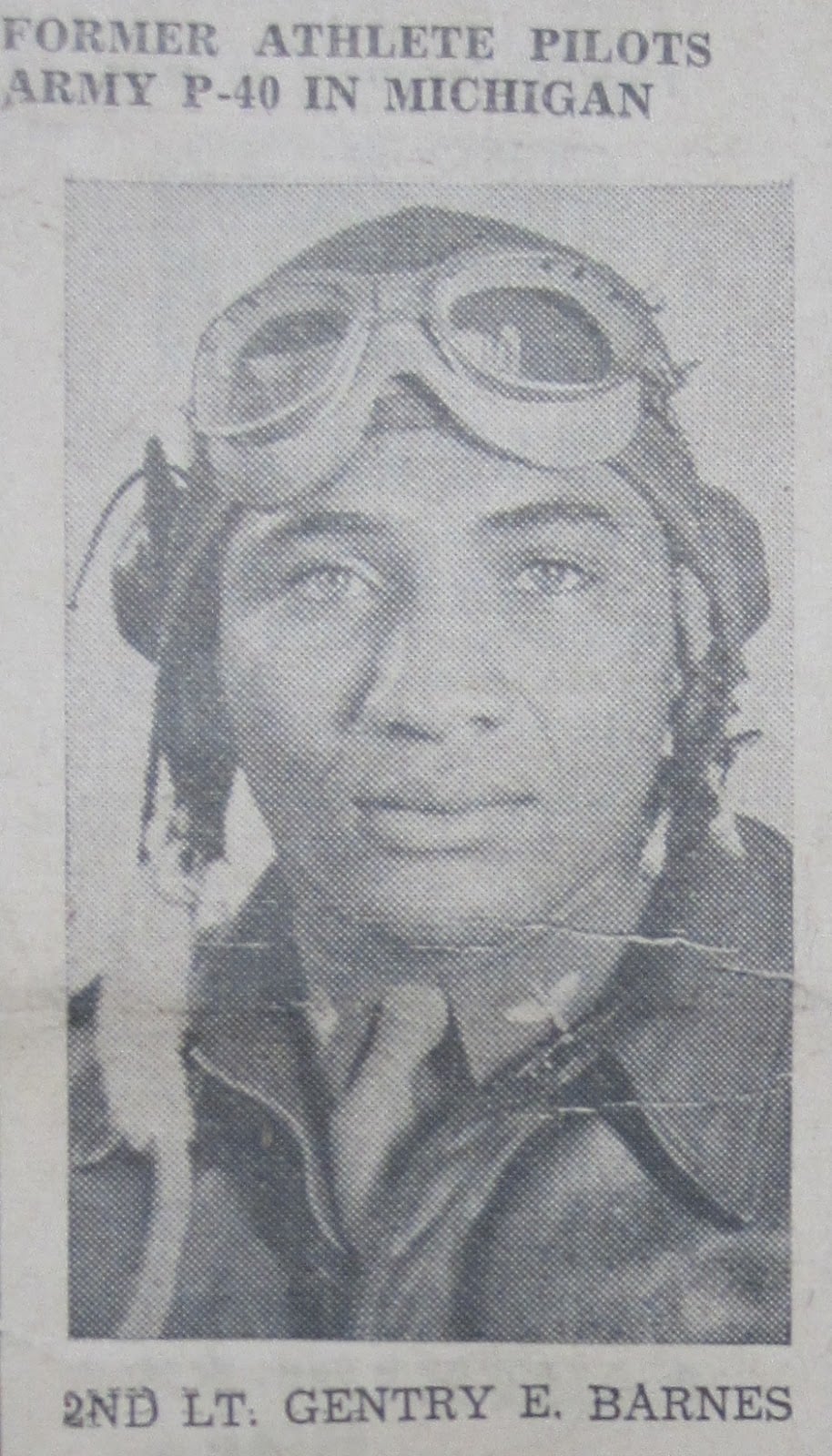 The town of Lawrenceville, Illinois, is located in the southeast corner of the state, bordering Indiana. For a small town whose population has never much exceeded 6,000 people, an unusually large number of significant sports figures have emerged from the community: Chicago Cubs/St. Louis Cardinals Hall-of-Fame pitcher Mordecai Brown, famous coach William McAndrew, and MLB pitcher Jack Ryan have all claimed Lawrenceville as home at one time or another.

Another high school/college athlete to emerge from the town would eventually contribute even more significantly to his community and nation as a Tuskegee Airmen: Gentry Eugene Barnes. Gentry would become the first African American from Lawrence County to receive a United States Army Air Force commission as a pilot, but was already famous for his legendary school sports career. Displaying their pride in their local hero, the Lawrenceville newspaper during the era described Gentry this way: “Many sports fans will recall Barnes who played on the Lawrenceville Township High School football squad in the backfield graduating in 1939. It was Barnes who tossed the pass to Barthelemy to score the first touchdown against the Bulldogs on Thanksgiving Day, 1938. He is remembered as a hard driving, fearless player on the gridiron and with the same spirit carrying him through in the US Army Air Corps.”

Gentry was born in Lawrenceville on April 23, 1921, to his parents Dorothy and Harry Barnes, and had an older brother named Marion. Father Harry contributed to the war effort during WWII as a civilian employee at George Field which was in use by the United States Army Air Force as an advanced pilot training school from 1942 until 1945. Prior to that, Harry worked as a laborer and mechanic at a local garage.

After graduating Lawrenceville Township High School, Gentry would attend the Illinois State University at the Normal, Illinois campus as a Health and Physical Education major. He was on the cross country, baseball, and football teams. By the time Gentry registered for the draft on February 16, 1942, he was working at the Illinois Hotel in Bloomington, Indiana.

In addition to his emphasis on sports, Gentry also displayed skills in the mechanical sciences. After enlisting in the military on September 3, 1942, Gentry was accepted to the Tuskegee Army Air Field training program. He graduated and was commissioned as a 2nd Lt. on April 15, 1944. After further training in California and Michigan, Barnes was sent to the European theater.

On April 15, 1945, members of the 332nd Fighter Group conducted strafing missions in Munich, Salzburg, Linz, Pilzen, and Regensburg and successfully “destroyed or damaged 35 locomotives, 8 oil cars, 44 other units of rolling stock, 4 barges, 4 motor transports on a flat car, and one aircraft in the air” (Haulman, “Tuskegee Airmen Chronology”). Now 1st Lt. Barnes of the 99th Fighter Squadron earned the Distinguished Flying Cross for his contributions.

After the war, Gentry moved to Indiana and married Ollie C. Fontenette. By 1969, Gentry was working as a master mechanic at the Bethlehem Steel’s Burns Harbor Plant. On September 11, 1969, Gentry was working under a tractor that accidently slipped into gear, running over him and crushing him. While doctors tried to save him, Gentry succumbed to his injuries and died at age 48.

During 1944, his hometown newspaper had described Gentry E. Barnes as fearless. Whether on the athletic field or during his brave service to his nation, that description certainly fits.