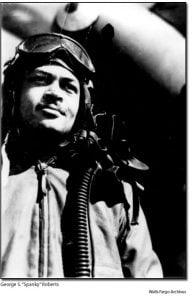 Roberts was born in London, Kanawha County in West Virginia, the son of Spencer and Estella Roberts. He graduated from Fairmont’s Dunbar High School in 1934 and from West Virginia State College (now University) in 1938, with a bachelor’s degree in mechanical arts.

After receiving his pilot’s license in the Civilian Pilot Training Program, Roberts entered aviation cadet training with the first class of Tuskegee Airmen in July 1941, the “washing out” rate was high, with only five of the 13 in George Roberts’ class graduating. Roberts completed the training and became the first African-American military pilot from West Virginia. He joined the 99th Pursuit Squadron (later known as the Fighter Squadron), and on June 1, 1942, he became the first African American commander of that squadron, serving in North Africa and Italy.

“It was a different time back then,” Roberts’ wife, Edith stated. “The government had actually done a study after World War I to determine if black people were capable of leading men in combat.”

Battling deep-seeded institutional racism, the young cadets training to be fighter pilots at an airfield in Tuskegee, Alabama, wore their uniforms with pride and dreamed of the day they would take to the skies to fight the enemy.

George and Edith Roberts married the day he graduated from pilot training, March 7, 1942. George then moved off the airbase to live with Edith, but that wasn’t easy, either. “There were no places for blacks to rent houses, so we had to stay in a house with another local black family,” she said.

The 99th Pursuit Squadron was put on alert in January 1943, and none of the men were allowed to leave the base, since the order to ship out could come at any moment. But those orders didn’t come until April.

“They stayed on alert there forever,” Edith Roberts said. “The Army didn’t know what to do with them because they were black, and they were fighter pilots.” George Roberts missed the birth of his first child since he couldn’t leave the base, and it wasn’t until a brief trip home in 1944 that he was reunited with his family.

When the Tuskegee Airmen did eventually get the call to go fight the Germans, they arrived in Morocco, in North Africa, where British Royal Air Force pilots trained them further on combat techniques.

Roberts first piloted an outdated P-40 Warhawk plane. The squadron was later equipped with new P-51 Mustangs. Edith, once joked that the men “loved those planes more than they loved their wives.”

Edith said that the airmen were being tested – with many in the Army hierarchy looking for an excuse to can the program and take the pilots out of action because of their race. To counter that, the men had strict orders to stay with the bombers they were assigned to escort and not go chasing German fighters across the skies, leaving the bomber formations open to attack.

The British, by contrast, flew at night, preferring to bomb entire cities and use the darkness to hide from enemy fighters. For the Americans flying in the day, raids could be disastrous if the Germans could shoot down the bombers without American fighters flying close for protection.

Every bomber shot down meant its crew of 10 Americans didn’t return to base.

Roberts eventually flew more than 100 missions against the enemy in Africa, Europe, and the Middle East.

After the integration of the armed forces in 1948, Roberts became the first African American officer to command a racially integrated unit at Langley Air Force Base in 1950. Following the war Roberts became the senior Air Corps ROTC instructor at Tuskegee Institute. He also served in Korea and Okinawa. In 1963, Roberts was assigned to Griffiss Air Force Base in New York where he was responsible for all ground radar in the Air Force. During the Vietnam War he served as deputy for logistics for fighters in Vietnam. Roberts retired with the rank of colonel at McClellan Air Force Base in 1968. His decorations included the Congressional Gold Medal, Air Force Commendation Medal with four oak clusters and two presidential citations.

In 1968, Roberts retired from a long career with the military and started working at Wells Fargo in Sacramento, California. He served as a credit officer, training officer, and personal banking officer before retiring in 1982. Roberts died in 1984 at the age of 65.