During his 26 years of service, he was assigned to stations in Germany, England, Turkey and Iran.

Tech Sgt Watson is the author of two books, “Memorable Memoirs” which is a story about his life before and during World War II and “A Salute to the Beginning.”

Tech Sgt Watson, along with fellow Tuskegee Airmen collectively received the Congressional Gold Medal on 29 March 2007 in the Rotunda of the Capitol Building in Washington, DC.  Then President George W. Bush made the presentation. 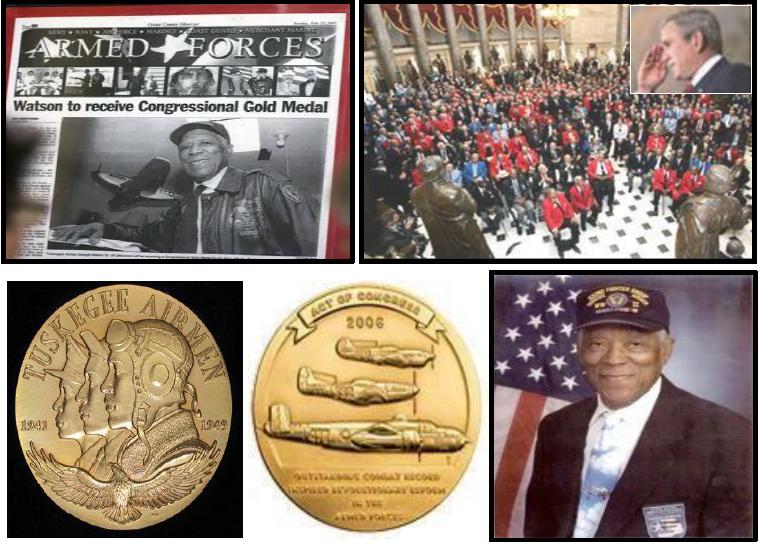 George Watson was born on 10 August 1920 in Wildwood, NJ. He attended schools in the cities of Neptune, Asbury Park and Lakewood. George graduated from Lakewood High School (LHS) in 1941. His mother moved him there when he was little and they stayed there.  Lakewood was always home base. He played football at LHS and was inducted into the school’s Hall of Fame. He was a fixture on the sidelines of LHS football and basketball games, taking pictures of athletes and later printing them out for free.

He was known throughout the Jersey Shore as one of the World War II (WWII) Documented Original Tuskegee Airmen (DOTA). In Lakewood, Watson was as much a pillar of the community as Route 9, which runs from Atlantic City to New York City.

Children knew him from his regular appearances in their classrooms, talking about WW II or as the friendly Army-Air Force Recruiter chatting with anyone who walked into the Post Office.  He told the same war stories thousands of times over the years.  In classrooms or at veteran events — or, more likely, in the living room of the Watson family’s split-level home in Lakewood. 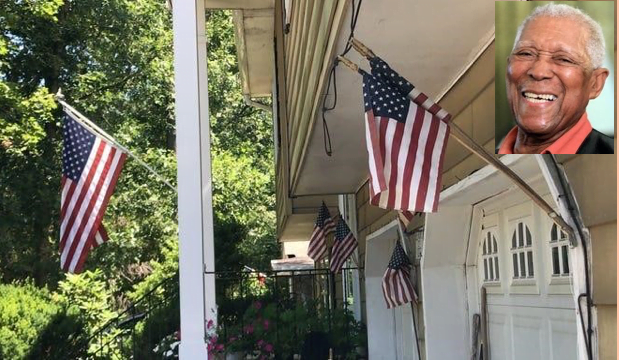 The Tuskegee Airmen based in Alabama was an all-African American Aviation Unit put together by the U.S. War Department in 1941. After graduating from high school, George enlisted in the U.S. Army Air Corps in February 1942. After a short stay at then-Fort Dix, NJ, he was hand-selected and sent to Tuskegee, AL to become part of the first group of recruits sent to that facility to help form the 332nd Fighter Group and the 96th Air Service Group. There he served as Supply Sergeant and Support Personnel. In 1944, George was deployed to Italy as part of the 332nd Fighter Group and assigned to the 366th Air Service Squadron. His duties included providing field services, such as delivering crucial aircraft parts to the ‘Red Tail-Angels.’  That was the nickname given to the 332nd Fighter Group Pilots responsible for flying escort for heavy bombers.

Respect and appreciation came slow. Watson recalls his first trip home from Europe and needing to catch a bus from Montgomery, AL to NJ. A white military police officer had other ideas. According to Watson, “The white police officer had two stripes and Watson had five strips as a Tech Sergeant. The police officer said that he wanted to see my pass. I showed it to him, but he still couldn’t believe it. He took me to the police station. After a while, I told him I was going to miss my bus. The police officer said, “‘Oh, don’t worry about your bus!”  As it turned out, Watson said, “He missed the next two buses.”  Watson hopes that all fallen soldiers are now seen for the colors that they fought for – rather than the colors of their skin.

Tech Sgt Watson retired after 26 years of military service at McGuire Air Force Base in NJ. There he served as an aircraft and missile electrician. Following his military service, he spent 15 years working for New Jersey Bell Telephone Company.  Tech Sgt Watson was the first African American to serve as a Recruiter for the Army-Air Force in Trenton, Lakewood and Asbury Park, NJ from 1951 through 1955.

In March of 1944, while on guard duty at Capodichino Air Field, near Naples-Italy, Watson was injured during a heavy air raid on P-39 fighter jets by the Germans. He was injured by shrapnel to his knees and ankles when the Germans dropped bombs in the raid. For fear of being transferred, he did not report his injuries.

It was Watson’s selflessness that actually caused such a delay in his receiving the award. Watson recalled, “That Airmen were told that if you were ever wounded overseas and you can suffer with it, then go ahead and suffer with it.” Because if you go into the field hospital, your outfit more than likely will move out and you could be moved somewhere else.” I didn’t want to leave those guys because we were like a family. 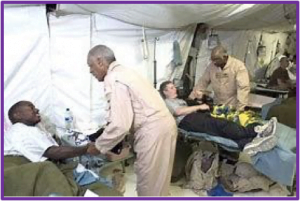 After his military retirement, Watson continued to carry on the Tuskegee Airmen Legacy. He received many civic awards amongst those was the National Tuskegee Airmen Lifetime Award. He wrote a few small books and provided excerpts for other books. He also consulted with George Lucas on the 19 January 2012 movie, “The Tuskegee Airmen.”

He has mentored hundreds.  He has given many speeches at schools, military events, honorable dinners, bases, and community events to name a few.

Watson would get his due. He has served as a Historian for Tuskegee Airmen Veterans, telling their stories to 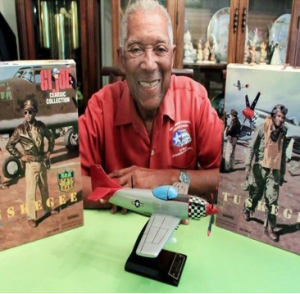 classrooms and military enthusiasts. The war stories became a part of Watson’s legend within the community. His favorite was that of‘Operation Fuel Tanks’ when he and other mechanics took part in an unauthorized procurement of a set of abandoned fuel tanks in order to ensure Red Tail Pilots would be able to make it back from a bombing run in Berlin.

Into his 90s, Tech Sgt / Army-Air Force Recruiter Watson continued to enjoy life, to receive blessings from his contributions to history and from his relationships with all who knew him. Watson loved to cook at home. Per his daughter-Tina, “Her father loved to cook at home.  It was like ‘pulling teeth’ trying to get him to a restaurant.”  Fried fish was his specialty. And on most Friday nights, the Watson house becomes a makeshift catering hall for family and whatever friends happened to stop by.

For years after his retirements from the military and as an Army-Air Force Recruiter, Watson remained active in Community Service through speaking engagements about his experience as a Tuskegee Airmen. He founded the American Legion Chapter; named, after Captain Robert B. Tresville. He was awarded the NAACP Lifetime Award and the Community Service Award for outstanding contributions. 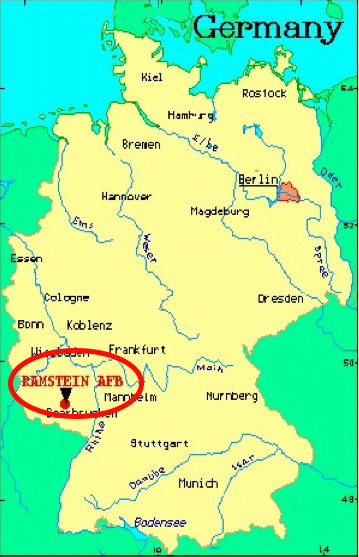 Watson and three other members of the historic group were traveling to Iraq to talk about their battles with discrimination and to give troops a boost. They stopped at Ramstein to tour the base and eat lunch with young Airmen before heading to Balad Air Base in Iraq. 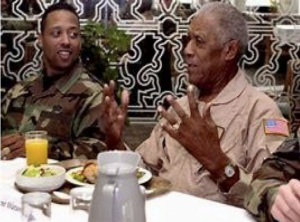 Tech Watson talks with an Airmen at Ramstein Air Base’s dining facility in Germany.  At age 84, it is evident that the retired Tech Sgt is eager to go back to the front lines.

The Warner Robins Air Force Base Community experienced living history as one of the Documented Original Tuskegee Airmen (DOTA) made a special visit on 8 February.

“I went overseas a lot and I was always amazed when I saw people from all nationalities,” said Tech Sgt Watson. “I started thinking back to when I was in the service and they didn’t want (blacks) to join.  However, we have talent.  All nationalities have talent to help out in war situations.  And I’m so proud now!”  As a whole, Tech Sgt Watson is pleased with the strides that all branches of the armed forces have made to diversify their Corps.

“A lot of people say to me, ‘George’ you’re up in age now, why are you going all over the world?” He said, “The Air Force and the Tuskegee Airmen are my heart; they were my life and they are still my heart!”

Philadelphia, PA — Members of the 314th Recruiting Squadron and two of the Documented Original Tuskegee Airmen (DOTA) viewed a private screening of the George Lucas film “Red Tails” at the Pearl Theater in Philadelphia on Jan. 20.

The Tuskegee Airmen in attendance were LT Col (Ret) Thomas Mayfield and Tech Sgt (Ret) George B. Watson, Sr.  Lt Col Ric “Trimmy” Trimillos, 314th RCS Commander, opened the event with a few remarks as follows: “Our primary focus is to learn about the ‘heritage’ of our Airmen.  When we go out looking to recruit from the broadest landscape, we can point back to these men. Not as the first African-American pilots and support personnel; but as American’s who persevered to pave the way so people of any race, color, or creed can serve.”

“We need to inspire today’s youth to take full advantage of their sacrifice,” Lt Col Mayfield said, “The dialogue was punctuated by Watson’s stories of when he served as an Air Force Recruiter and words of wisdom for recruiting today’s youth.

According to Watson, “The reason Recruiters wear the Air Force Recruiting Service ‘Cookie’ is because the arm band worn by Recruiters during WWII with the words ‘Army-Air Force Recruiter’ looked very similar to the ‘Next of Kin’ military arm bands. Parents and applicants would often not answer their door for fear the Recruiter was there to deliver news of a loved one’s death.” 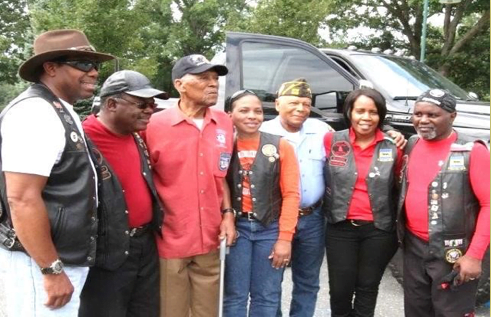 On 21 September, Tech Sgt George Watson, Sr. attended an event held at the VFW post in Asbury Park NJ.  The event was sponsored by the members of the Tuskegee Airmen Motorcycle Club (TAMC) – Central Jersey Chapter.

The ‘theme’ was “How Tech Sgt Watson’s Life Was Enriched with History.”  Highlights included his service experiences, mainly in Italy, with the 96th and 523rd Service Groups and the 332nd Fighter Group. 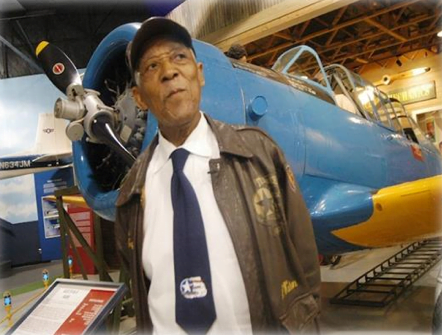 Maurice Watson, youngest son, of George Watson, Sr. shared stories of his father not only being an Air Force veteran; but – a great father, a great mentor and a great humanitarian.

Sadly, the elder Watson died on Monday, 19 June 2017 due to complications from pneumonia at Care One at Wall, Wall Township, NJ.  He was 96-years of age.

Services were held at Calvary Lighthouse Church located just a few hundred feet away from the Watson home on East County Line Road in Lakewood, NJ.

In lieu of flowers, the family asked mourners to make contributions in his name to the Honorable Hannibal Cox Tuition Assistance Fund.  The request was made in honor of Watson’s many efforts over the years to support students.

Tina Watson, the elder Watson’s daughter said, “Her father was always very passionate about talking to students, about telling them to strive for it.”  He would say, “You have to get your education and go forth.”

He was preceded in death by his wife, Louise. They were married for 71 years before her death in 2014.  The Watson’s had two sons and one daughter.

Lakewood is situated near several major roads, including the Garden State Parkway.  It is within an hour and a half of NY City, Philadelphia, Atlantic City, the State Capitol of Trenton and only a few miles from beaches, boardwalks and malls.

At the turn of the century, Lakewood was a haven for the rich and famous.  It was a premier resort visited by Presidents, financiers, literary figures, entertainers and famous sports personalities.

Created and Designed by Jacqueline Covington 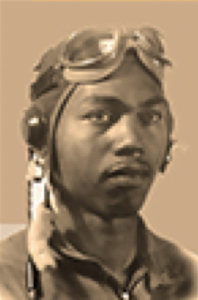