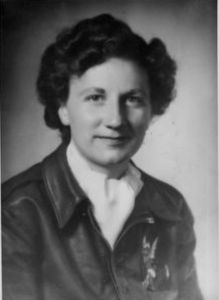 “That’s what I want to do.”
~Geraldine “Jerry” Hardman Jordan, WASP, WWII

Geraldine “Jerry” Hardman Jordan knew she wanted to be a pilot from the time she was five years old. The day was May 22, 1927. She was at her grandparents’ farm outside the tiny town of Ontario, Oregon.

The farmhouse had no radio or telephone; when major news broke, a neighbor simply saddled up his horse and rode from farm to farm to spread the word. The news he brought that day: Charles Lindbergh had flown across the Atlantic and landed in France.

As she later told her children, again and again, when the neighbor rode away, she looked up and said, “That’s what I want to do.”

She started flying at age 15, scrounging up money to learn the ropes on an old Curtiss Jenny under the tutelage of a colorful uncle, larger-than-life character named Casey Jones, who was a former barnstormer.

In 1939 the University of Nevada, Reno was granted 20 slots for Civilian Pilot Training Program (CPTP) trainees. Ostensibly established to increase general aviation opportunities, the unspoken message of the CPTP was clear: As conditions deteriorated in Europe, the country needed a pool of well-trained pilots ready to take on military duties. Geraldine grabbed the last slot in a Civilian Pilot Training Program when there were no other takers. (At the time, she was not a student, but was working as secretary to the university president.)

She was a member of the Civil Air Patrol Reno Air Squadron (now Reno Composite Squadron) and while working as secretary to the University president, Leon Hartman.

When the United States joined World War II, Hardman became one of just over 1,000 civilians to complete the 22 and a half weeks of rigorous training needed to join the first class of Women Airforce Service Pilots, or WASPs.

Barred from combat at the time, WASPs tested and ferried aircraft from base to base, trained pilots and did other jobs that freed up male pilots to serve in combat roles. In her time, Hardman flew every plane in the U.S. military for home-front missions to free up men for combat missions in World War II. Her personal favorite was the B-25 Mitchell bombers.

Read this great feature story about Geraldine in Air & Space!