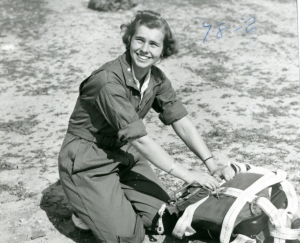 With the August 13, 2015, passing of Gertrude Meserve Tubbs Levalley, 95, a finite group of 28 extraordinary women — known as “the WAFS” or “the Originals” — all are gone.

Gertrude was the last of Nancy Love’s elite Women’s Auxiliary Ferrying Squadron; the first 28 women hired by the Army Air Forces, specifically to ferry military aircraft for their country in World War II.

Young Gertrude Meserve made model airplanes as a kid. Not the fancy plastic ones found in kits today, but the ones of balsa wood. She got her first ride in an airplane in 1936 at age 16. “It was a coffee promotion. You had to guess how high the airplane was and send your answer in with proof of purchase.” She won a thirty-minute flight.

Gertrude was one of twin girls born April 28, 1920, in Boston Massachusetts. She also had a brother who was three years older. “Ever since I was knee-high to a grasshopper, I wanted to fly. Nothing else interested me. I had a few hours of instruction before I graduated from Winchester High School in Winchester, Massachusetts.” She excelled in math and science courses in high school.

“After graduation, I was able to concentrate on getting all of my flight licenses – private, limited commercial, commercial and flight instructor.” She got her instrument rating in 1939.

The civilian Pilot Training (CPT) program gave Gertrude her break. “We had a little trouble with the insurance company. They had never insured a female pilot before, but they needed instructors. I taught eight classes at Logan Airport (Boston) then transferred to Canton-Norwood. My first class was a group from MIT. You could tell which school the young men came from by their dress. The MIT boys had to wear a suit and tie, but the boys from Harvard wore sport coats.” She also taught students from Northeastern University and Tufts.

“I dated a couple of them – after training,” she says with a twinkling blue eyes belying her taciturn Bostonian humor. “They told us to never date someone while he was your student. Then when World War II started, all private flying ceased on the East Coast and we were moved to Athol-Orange Airport in Athol, Massachusetts.”

By the time her WAFS telegram came, Gertrude had 1,964 hours in her log books. Given her hours and experience, one would think she was a shoo-in, but first she had to earn her 200-horsepower rating, which she did immediately. “You build up time fast when you are instructing. I descended on New Castle Army Air Base in Delaware and reported to Nancy Love. Flying for the WAFS was like flying on Cloud Nine – which is an understatement.” Accepted September 30, 1942 she was number twelve in the final squadron listing.

Gertrude spent her entire WAFS/WASP career in Wilmington, DE, at New Castle Army Air Base as part of the 2nd Ferrying Group. She went to pursuit school as part of the first class — December 1943 — graduating January 10, 1944. Immediately after graduation, she and all the other male and female graduates picked up P-51s at Long Beach and ferried them to Newark, NJ, before reporting back to their squadrons.

Gertrude, Nancy Batson and Teresa James were later checked out on the twin-engine C-60, which was used to fly the P-47 ferry pilots back from Newark to Farmingdale — on Long Island — where they were stationed, TDY for two weeks at a time throughout 1944. Rather than navigating back across New York City and over to Long Island via land transport, it was the quickest return possible so that the ferry pilots could pick up yet another P-47, fly it 50 miles west as the crow flies, and deliver it to the docks for shipment abroad. Gertrude delivered 200 P-47s between January and December 1944, in addition to her periodic C-60 flights and other pursuit aircraft.

What was her favorite airplane? “A P-47, I delivered two hundred of them.” Any close calls? “I was bringing a P-51 back from Long Beach. When I took off from Dallas, the engine coughed, so I took it back to Love Field. A test pilot took it up. It coughed on him on the downwind, so they grounded the plane. Otherwise, I’m here. One landing per takeoff.”

“After deactivation, I did a little flying, but it was so tame just flying around the airport, I gave it up. When our three sons came along, I let my husband do all the flying as an executive pilot with Curtiss-Wright at Caldwell, New Jersey.” Gertrude did volunteer work with the PTA, drove for the Red Cross, worked for a catalog store and a pharmaceutical company while her boys were growing up.

In November 1969, she and Charlie moved to Florida. He died in 1974. In April 1990, Gertrude married Russell LeValley, a farmer from Akron, Michigan. He died in March 1998. She then volunteered with the Neighborly Senior Services, helping people coordinate Medicare and their co-insurance.

Gertrude was one of the six WAFS who attended the 1999 reunion in Birmingham, Alabama, hosted by Nancy Batson Crews. In an interview there, she said” “Flying military airplanes was beyond my wildest dreams. Just looking out and seeing the Air Force star and insignia on the wing was a thrill to me. We couldn’t believe our luck. First, we flew all over the country in Cubs and PT-19s, then later the bigger stuff, and we got paid for it!”

“I feel we were the forerunners of today’s women in the military and especially the Air Force.”

As of March 10, 2010, when the WASP received their Congressional Gold Medals, five of “the Originals” remained. With the passing of Barbara “Donnie” Donahue Ross August 21, 2010, Phyllis Burchfield Fulton June 21, 2012, Barbara “B.J.” Erickson London July 7, 2013, and Florence Miller Watson February 4, 2014, Gertrude was the sole survivor. And now she, too, is gone. Three of them — Gertrude, B.J. and Donnie — were present in the Capitol when the Gold Medals were handed out.