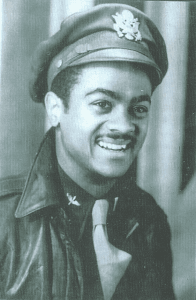 While still a teenager, growing up in New York City, Harry T. Stewart Jr. enlisted in the war effort and joined the legendary ranks of the Tuskegee Airmen. He earned his wings and commission in 1943, but his youth did not hinder his ability to become one of the most famous of the Tuskegee Airmen pilots of World War II, and beyond.

Stewart was born in Newport News, Virginia, and moved with his family to Queens when he was a toddler. The proximity of his family’s home to what is now LaGuardia Airport placed Stewart under the flight path of the aircraft coming and going to this burgeoning travel hub of New York City. In awe, the youngster grew up to become one of our country’s first black military aviators.

At 17, Stewart signed up for war service, volunteering before being drafted. He was called up promptly after turning 18 and passed the exams to qualify to train to become a pilot, and heading off shortly after to Tuskegee Army Air Field for initial flight training. He was destined to learn to fly before he even learned to drive a car.

After his time at Tuskegee, he completed combat and fighter training at Walterboro Army Air Field in South Carolina before being sent to Italy with the 301st Fighter Squadron of the 332nd Fighter Group in 1944. 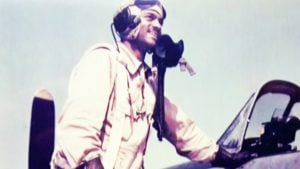 Stewart flew 43 missions in combat, amassing an outstanding record. He is widely acclaimed for being one of only four Tuskegee Airmen with three aerial victories in one day, amazingly taking down three German Focke-Wulf 190s on April 1, 1945. The feat took place while on a mission to escort and provide cover for B-24 bomberson a raid over Linz, Austria. He was awarded the Distinguished Flying Cross for the effort, and earned a place in the history books.

After the War, Stewart was a part of the team from the 332nd Fighter Group that won the first ever USAF fighter gunnery competition in 1949, a grueling 10-day event held at what is now Nellis Air Force Base in Nevada for all military fighter groups. Despite flying obsolete single-engine P-47 aircraft for the event, they led from the start and won in the conventional aircraft division.

Stewart was honorably discharged from active duty in 1950, serving as a Reservist for several more years, eventually retiring with the rank of Lieutenant Colonel. He resumed his education and earned a degree in mechanical engineering from New York University in 1963 where he served as the present of the student council and chair of the American Society of Mechanical Engineers.

He went on to have a successful civilian career, retiring as Vice President of the ANR Pipeline Company in Detroit, Michigan, operators of one of the largest interstate natural gas pipeline systems in the United States. Outside of work, Stewart’s passion for aviation kept him in the air and he continued to fly, even earning his commercial glider pilots license at the age of 81.

Harry Stewart is a friend to the CAF Red Tail Squadron, appearing at events to inspire people of all ages with the important lessons of the Tuskegee Airmen. We salute you, Lt Col Stewart, and thank you for being an example of courage for generations to come. 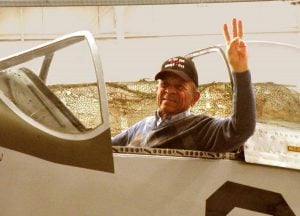