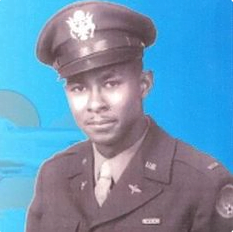 Harvey Alan Bayless was born to Harry and Stella Bayless, January 10, 1924 in Frankfort, Ohio. Harvey graduated from Frankfort High School at the age of 16. From there he went to a technical institute at Wilberforce studying a two-year course on radio technology.

He was drafted in the military in May of 1943. At that time, he was working as a radar

mechanic in Boston, Massachusetts where they had a single African American team servicing the SCR-270 radar, which picked up the Japanese over in Pearl Harbor. Because he had some formal training in radio technology at the Lexa Signal Depot in Fayette County, Kentucky.

He served in World War II as a 2nd Lieutenant Communications Maintenance Worker for the Air Force. After returning from the war, he married Mamie Wilson in 1945. Harvey graduated from Syracuse University in 1956 with a degree in Physics. He was an Electronic Engineer with the government for more than 37 years. Harvey was one of the original Tuskegee Airmen to receive the Congressional Gold Medal for outstanding military service to our Nation during World War II in 2007.

Here is an excerpt from a 2011 interview with Deborah Dandridge, Field Archivist for the WORLD WAR II ORAL HISTORY PROJECT.

BAYLESS: When I got drafted they shipped us from—we went to Rome Air Depot in Rome, New York and they sent us, by mistake, to a white signal company in Columbia, South Carolina. All right, when we got down to Columbia we said, Bayless and Neal(??), another gentleman with me, reporting for duty. And they said, Well, we’ll be there in fifteen or twenty minutes. Well then nobody showed up in fifteen or twenty minutes and I called again about an hour and a half later, and they said, We were there we didn’t see you. They said, Would you stand in front of the post box, post office box outside. So we did. And when they came back, they thought they were going to be picking up two white soldiers, it was two blacks.

DANDRIDGE: Cause they didn’t want you to be seen?

BAYLESS: Didn’t want to be seen. But when we got there, the commander, who was from Columbus, Ohio, he says, he gave us exam. “You guys are real talented we’ll try to get you into this, there’s a black signal corps being formed.” And he says, “All you have to do is take your basic training here,” and he assigned us to a black chemical warfare group and we took our basic training. And when we weren’t training we would visit the two black women, female—what’s the—Allen and then there’s another black school there, in Columbia, there’s two black female schools and we enjoyed it.

At that time the 96th Service Group and the 332nd had been moved out of Tuskegee Army Flying School. They went to Detroit and they stayed in Detroit about a month or two at Selfridge Field. Then they moved up to Oscoda, Michigan in June of 1943 for gunnery training.

Harvey was notified around the fifteenth of October that he would be going overseas to Italy and was stationed at the Montecorvino Air Field where his main task was servicing the radios. He worked with the SCR-522 transceiver and had to take care of the control car with ground-based equipment.

He joined the reserves and was recalled in 1951 where he joined the headquarters of Pacific Division as a communications staff officer.

After returning from the war, he married Mamie Wilson December 3, 1945.

Harvey graduated from Syracuse University in 1956 with a degree in Physics.

In 1978 he setup a consulting business and started working for companies like 3M and DuPont.

Harvey was one of the original Tuskegee Airmen to receive the Congressional Gold Medal for outstanding military service to our Nation during World War II in 2007. He was a long-time resident of Overland Park, a member of Valley View United Methodist Church, Tuskegee Airmen Heart of America Chapter, Military Officers Association of America (MOAA), Air Force Association (AFA), and Life Member of the Institute of Electrical & Electronic Engineers.