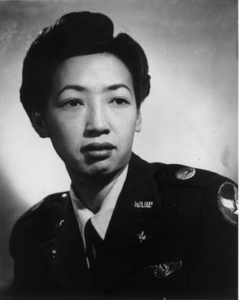 Hazel Ah Ying Lee was born in Portland, Oregon on August 24, 1912 to Chinese immigrant parents. Hazel learned to fly when she was a teenager working as an elevator operator in Oregon to earn money to pay for her lessons. She received her pilot certificate at age 19. In 1933 Hazel went to China where she had hopes of flying for the Chinese Air Force. She was rejected because she was female. Her diligence paid off, however, and she soon began to fly for a Chinese airline. Japan invaded China in 1937 and Hazel again applied to the Chinese Air Force and was rejected. She escaped to Hong Kong and then New York where she worked to procure military assets for China.

In 1942 she learned about the Women’s Flying Training Detachment and was accepted into their program. Soon after graduating from that program in 1943, the Women’s Flying Training Detachment (WFTD) merged with the Women’s Air Ferrying Service (WAFS) forming the Women Airforce Service Pilots (WASP). Lee’s first post was at the Air Transport Command’s 3rd Ferrying Squadron at Romulus Army Air Base near Detroit. There she flew Stearman PT-17s, North American T-6 Texans and the Boeing C-45. From there she moved on to Pursuit school in Brownsvile, Texas where she became one of the select few who qualified to fly the high-powered fighter aircraft such as the P-51 Mustang, After that training she returned to Michigan where she delivered aircraft to their points of embarkation to ship to Europe and the Pacific. The job was intense, sometimes requiring seven-day work weeks with little time off.

Lee was described by her fellow pilots as calm, fearless and willing and able to deliver any aircraft to any location. During this time, Lee had two forced landings. One of those landings occurred in a Kansas farm field where a farmer, with pitchfork in hand, chased her around the airplane declaring to his neighbors that the Japanese had invaded Kansas. On November 10 in 1944 Lee received orders to report to the Bell Aircraft Factory at Niagara Falls, New York and deliver a P-63 to Great Falls, Montana. Bad weather near Fargo, North Dakota delayed the mission. The weather cleared on Thanksgiving morning and Lee was able to depart Fargo. As a large number of P-63s approached Great Falls there was some confusion in the control tower. Lee’s plane collided with another P-63 on the runway and the aircraft was engulfed in flames. Lee was pulled from the wreckage and died two days later from the burns she received.
Lee’s family learned of her death and, three days later, the death of Hazel’s brother, Victor, who was serving in the U.S. Tank Corps in France. The family wished to bury their two children in a cemetery in Oregon, but cemetery policy restricted “non-white” burials. The family persevered and eventually prevailed after a lengthy battle. Lee and her brother were laid to rest in River View Cemetery overlooking the Willamette River in Oregon. 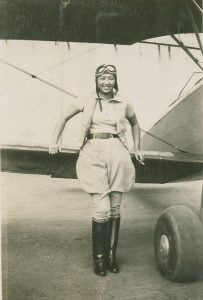 Hazel Lee posing with a biplane, 1932

Hazel Ying Lee reviews her performance after a session in a Link trainer. 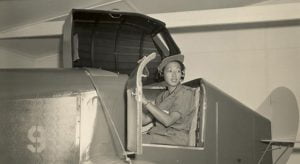