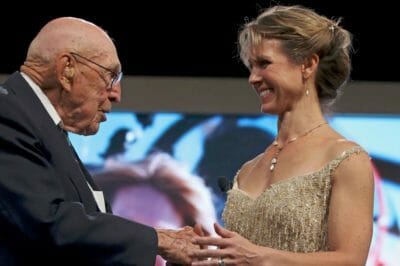 Next week The Wings Club Foundation and International Aviation Womens Association (IAWA) will honor Heather Penney with the 2017 Outstanding Aviator Award. The presentation of this year’s award will take place during The Wings Club Foundation’s Annual Meeting on March 29 at The Yale Club in New York City. Since its inception in 2010, the annual Outstanding Aviator Award has been presented to iconic recipients such as the Tuskegee Airmen, the Women Airforce Service Pilots (WASP), the Doolittle Raiders, Patty Wagstaff, Robert A. “Bob” Hoover, and Suzanna Darcy-Hennemann.

Maj. Heather Penney was inspired to pursue a career as a fighter pilot by her father, a retired Air Force Colonel. As a first lieutenant, she became the first woman in her Air National Guard unit, serving as a training officer flying F-16Cs on training missions. As the only woman in her fighter pilot training class, and again the only woman in her fighter squadron, Penney was able to draw upon the legacy of the WASP to be reminded of her ability to succeed at whatever she put her heart and mind to.

She is widely recognized for her extraordinary service and bravery on September 11, 2001. Penney was only 25 years old when she piloted her unarmed F-16 on the morning of 9/11 to intercept a hijacked passenger jet. United Flight 93 was feared to be on a collision course with Washington D.C. With no time to arm the F-16, she and fellow pilot Marc H. Sasseville were sent with a clear mission to take down this potential missile at whatever cost, even that of their own lives.

United 93 never made it to Washington D.C. The brave passengers aboard took control of the airplane and crashed it into a Pennsylvania field before Penney arrived. For this mission she has familiarity, but she never wanted it to make her a celebrity. She is humble, filled with a sense of service to her country as instilled by her father, and his father before him. Her mission on the morning of 9/11 was to protect our nation’s capital, and she did so with absolute selflessness.

For Maj. Penney, the WASP are a source of inspiration. Now, as National Chairman for the CAF RISE ABOVE: WASP initiative, she is helping to tell their story, and using it to impact young people’s lives. “The WASP support our project not just because we want to honor and educate,” she said, “but more importantly because this project will change young girls’ lives. It will inspire them, give them role models, and give them the character beliefs and behaviors to achieve their potential.”

Penney earned two college degrees, received a commission as an officer and completed two tours in Iraq. It was determination and the belief that if you rise above any obstacle set before you, anything is possible. With the Commemorative Air Force (CAF), Penney is dedicated to ensuring the story of the WASP is told to future generations to inspire other women and girls to reach their true potential, and to inspire everyone to RISE ABOVE the challenges in their own lives, just like the WASP. “I am so proud to be chairing this effort to honor the WASP and invest in our young people. We will change lives, and through the WASP’s amazing story, we will show young girls and boys how to overcome obstacles and barriers so that they can achieve their full potential and live their dreams!”

The CAF joins The Wings Club Foundation and IAWA in thanking and honoring Heather Penney for her many outstanding accomplishments.

The Wings Club Foundation, Inc. is a 501(c)(3) charitable organization. Its mission is to focus on initiatives aimed at supporting scholarships for students pursuing a career in aviation or aerospace; providing programs to educate in the field of aviation and supporting charitable organizations that use aviation to help those in need. The Wings Club Foundation serves over 1,300 members including industry leaders, pilots, professionals in related service organizations and students of aviation.

The International Aviation Womens Association (IAWA) is an international organization for women who hold positions of impact in the aviation and aerospace industry. Founded in 1988, IAWA brings together women of achievement and promotes their advancement throughout the world.