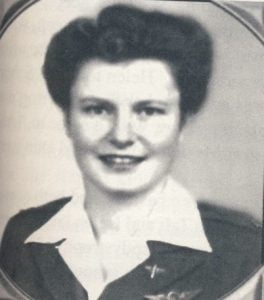 When Gary and Dean Prosser were growing up, they thought everybody’s mother flew bombers and fighters. “But we had to pry the stories out of Mom. The P-51 was hands-down favorite,” says Gary, “particularly the P-51D with the Rolls Royce engine.”

Helen Richards was the tenth Original – and the youngest, arriving in Wilmington in the latter half of September, 1942. Born August 2, 1921 to Arthur L. and Sedenia Dunford Richards. Helen had already earned an associates degree in liberal arts from Pasadena Junior College in California and was teaching flying at the Floating Feather Airport just outside Boise, Idaho when word came of Nancy Love’s intention to form a woman’s squadron. She had 975 hours to her credit.

In January 1943, Helen was sent to Dallas where she and another young West Coast WAFS Dorothy Scott, became best friends. They both entered pursuit school on December 1, 1943. Sadly, Dorothy was killed the third day of training but Helen became one of the earliest graduates in January 1944. Reassigned to Long Beach, she flew all the pursuits and once proved her mettle in a contest with a male pilot, flying a P-47 – out-maneuvering him, she came up behind him for the kill. Helen also did a flying sequence in a BT-13 for Ladles Courageous, the movie about Nancy Love and the WAFS starring Loretta Young. And once she received a letter from General George commending her for flying more airplanes than anyone else in a given month.

Helen and future husband, Don Prosser, met in CPT class at Pasadena in the fall of 1939 – they were the top male and female graduates. Don ended up in Arizona instructing US Army and RAF cadets. “Early one Sunday morning, I was blasted out of my bed by a roaring BT-13. It was Helen on a ferrying mission. Then she flew a P-38 in and told the mechanic that it had an oil leak. He told her he couldn’t find it. She said ‘keep looking, you’ll find it.’ I proposed to her that night. It rattled her so much, when she took off the next morning, the cover was still on the pitot tube. She flew the first leg without knowing her airspeed.” Helen told Del Scharr that once, ferrying a P-51 east, she was admiring her diamond ring and became “so engrossed in my dreams along the way, when I came to, I had drifted forty miles off course and was over Mexico!” Helen and Don were married Christmas Day 1944.

After the war they went into flight service business and both earned teaching degrees at Fresno State. They lived in Taft and Helen taught some special education classes, mostly kids with muscular dystrophy. In 1968, Don was offered a position teaching aviation in high school in northern California and they moved to Clear Lake.

On October 23, 1976, Helen was given a bi-annual flight check to a friend who owned a Beechcraft Bonanza. Something happened during the simulated forced landing- it rolled into an inverted dive and crashed. This tragedy took place one day after the death of Helen’s hero, Nancy Love.