In 1942, as America struggled to arm itself for war, the leaders of the Army Air Forces (AAF) knew that airpower would be crucial to winning. However, we had but a fraction of the number of trained pilots we needed to fight this war. And those men already were assigned to combat-related duty.

By spring of 1942, the Army was desperate for pilots to deliver the newly built trainer aircraft that were rolling off the factory assembly lines. Those airplanes were badly needed at flight schools in the South where fledgling fighter and bomber pilots were in training. No pilots could be spared to deliver the trainers to the schools.

When finding men to fill these jobs proved problematic, 28 experienced civilian women pilots volunteered to take on those ferrying jobs. Recruited by Nancy Harkness Love, they formed the country’s first female squadron in September 1942. Their name? The Women’s Auxiliary Ferrying Squadron or WAFS. They flew for the Ferrying Division, Air Transport Command, USAAF. 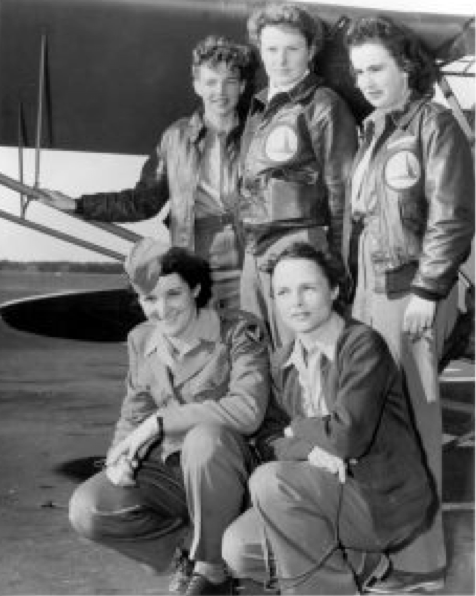 Between November 1942 and December 1944, through the efforts of another woman pilot, Jacqueline Cochran, 1,074 more women were trained to fly “the Army way”. Their training began in Houston, then was moved to Sweetwater, TX. Graduates of the early classes were destined to fly with Nancy Love’s WAFS squadrons.

Later graduates were assigned—on an experimental basis—to see if women could perform any number of flight-related jobs for the Army. They relieved male pilots of what some termed “the dishwashing jobs” of flying — the jobs the men preferred not to do. The women wanted those jobs. They wanted to fly!

The efforts of Love and Cochran released male pilots to be sent where they were most needed to fight the War. Women pilots went on to serve in a variety of jobs at more than 120 bases around the country.

In August 1943, the WAFS (by then there were more than 100 of them) and the women in training in Texas all became known as the WASP—Women Airforce Service Pilots. They were placed under Cochran’s command. However, Nancy Love continued to lead the WASP of the Ferrying Division, Air Transport Command (ATC). She reported directly to General William H. Tunner.

Over two-plus years of service, the WASP, collectively, flew every aircraft in the Army’s World War II arsenal. In addition to ferrying, they towed gunnery targets, transported equipment and nonflying personnel. They flight-tested aircraft that had been repaired — before the men were allowed to fly them again — plus many other jobs.

THE WOMEN PROVED THEY COULD FLY!

By late 1943, training aircraft no longer were needed. The factories now turned out high-performance fighter aircraft, known as pursuits. These aircraft could protect four-engine bombers on long-range bombing runs over Germany. The more experienced of Nancy Love’s WASP ferry pilots went back to school to learn to fly those pursuits. Delivering single-engine, single-cockpit pursuit aircraft to the docks on the Atlantic and Pacific coasts for shipment abroad became THE top priority job of the women ferry pilots.

BUT THE U.S. CONGRESS SAID “NO”

Arnold was revered by the U.S. Congress, which was known to give him everything he asked for to fight the war. But in June 1944, when he sought to officially designate his WASP as members of the United States military, Congress said “no.” Disgruntled male pilots had complained loudly that women were taking their jobs. The press took up the issue and it resulted in a nasty smear campaign. The women pilots remained civilians.

Like the men, WASP flew whatever they were asked to fly. Like the men, they dealt with balky aircraft, malfunctioning equipment and occasionally deadly crashes. Thirty-eight WASP died flying for their country. But the military took no responsibility for them. Classmates or squadron mates chipped in to ship their bodies’ home.

NO GOLD STAR FOR THE GRIEVING FAMILY

Throughout the program, the WASP received no medical care and no insurance benefits. No Gold Star was placed in the family’s window if their daughter died flying for her country. No burial subsidy. No flag on the coffin. Militarization would have remedied those inequities, but it didn’t happen.

The WASP were disbanded on December 20, 1944, and sent home with no recognition. Victory was in sight. The War would be over in eight months. The female pilots were expendable.

These 1,102 Women Airforce Service Pilots flew wingtip to wingtip with their male counterparts and were vital to the war effort.