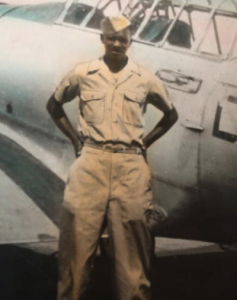 Hilton Forrest Carter Jr. as born June 30, 1928, in New Orleans, Louisiana the first of two sons born to Helton Forrest Sr. and Lillian (Dorest) Carter. At age 91, he passed away on Wednesday, May 6, 2020 at his residence in Columbus, Ohio.

At a very young age he and his brother Daniel migrated to New York City where they lived with their mother and his life would truly begin.

He was 17 at the start of 1945 during that pivotal last year of battles in the Pacific that eventually led to Japan’s surrender. In 1947, he was sent to Hawaii and from there to Guam and the Mariana Islands where he attended aircraft engine mechanic school to become an Aircraft Crew Chief which later took him to Okinawa, Japan, and China. Upon his return stateside in late 1948, he was assigned to Lockbourne Air Force Base where he met the love of his life Odessa.

In a videotaped interview, Carter spoke of how he was based in Guam and was a crew member on missions over Okinawa, Tinian and Japan.

“I was a crew chief and gunner. Whatever they needed,” Carter said.

After the war, Carter became a member of the newly formed U.S. Air Force and rose to the level of staff sergeant

Columbus became Carter’s home in 1948 when he received a transfer to the then Lockbourne Air Force Base, now known as Rickenbacker International Airport. Lockbourne was the home base for the Tuskegee Airmen.

Carter was a crew chief under the legendary Maj. Daniel “Chappie” James Jr., who would go on to become the first black American to be a four-star general in the U.S. Air Force.

“He was a wonderful man to work for,” Carter recalled of his time working under James.

Carter said one of his more harrowing experiences was when an engine on a Fairchild C-119 “Flying Boxcar” personnel and cargo aircraft caught fire while they were flying over Wilmington, Clinton County, Ohio.

“It was too low to bail so we had to crash land it,” Carter said. “I came out of that OK and I thank God for that.”

After receiving an honorable discharge in 1949, he continued to serve his country in the Air Force another nine years as a flight engineer. He also was a long time and honored documented original Tuskegee Airmen. After his discharge from the military reserves, he donated his flight suit and boots that he wore as the crew chief on the Chappie James Aircraft to the Motts Military Museum, Inc., Groveport, Ohio, which is currently on display there.

July 3, 2018, Hilton was honored by the Ford Oval of Honor Independence Day parade board of trustees to serve as the Grand Marshal of the Red White and Boom parade.

After Hilton and Odessa’s marriage in 1952, they relocated to Los Angeles, California, where he became active in the church and the Democratic Party. Upon his return to Columbus, Ohio, he continued to remain active in the Democratic Party. He was elected as 6th Ward Committeemen and County Central Committeemen. He also served/worked as Deputy Treasurer, Treasurer, and Deputy Auditor for the City of Columbus, Ohio, and Assistant Deputy Auditor for the State of Ohio. He retired from the Franklin County Board of Elections as Deputy Director.

Hilton was one of the first lectors for the Catholic radio/TV and Saint Dominic masses. He continued to serve as lector, president of the Saint Dominic Booster Club, the church building committee, and maintenance crew. Additionally, he served as an usher and on the bereavement ministry committee at Christ the King Catholic Church. He was a former co-owner of a produce business at the old Mount Vernon market and the North Market. Hilton was an exceptional husband, father, grandfather, great grandfather, and friend. He was always stressing the importance of religion and education. He enjoyed traveling, playing cards, fishing, talking politics, and spending time with family. Over the years, he in Odessa traveled extensively to many destinations around the country and abroad.

Carter lived a long, full life. He loved and was loved. He served his fellow man.