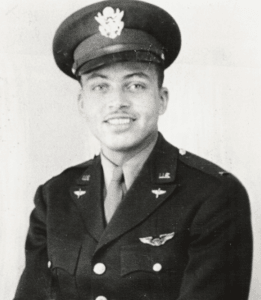 Like many children who grew up during the post-World War I golden age of aviation, young Howard Baugh dreamed of earning his wings and a seat in the cockpit. But a country mired by systemic racism severely restricted the opportunities for Baugh, and all people of color, and as a young man he faced a harsh reality that this vision of flight may never come true.

Baugh was born January 20, 1920 to William and Carrie Baugh in Petersburg, Virginia. One of five siblings, the family endured enforced segregation and limited civil liberties because of the state’s Jim Crow laws. Baugh attended Virginia State College (now Virginia State University) in Petersburg, one of the nation’s first historically black colleges founded in the mid-Atlantic region. He graduated in 1941, and in February of the following year he married his college sweetheart, Constance Layne.

As World War II geared up to change the course of the country, Baugh would soon get a chance to earn his wings. With the U.S. Army Air Corps opening up the opportunities for black Americans to fly and fight for their country, he enlisted, and was sent to pilot training in Tuskegee, Alabama in March of 1942, just six weeks after he was married. He passed the rigorous courses and was commissioned as an officer in November of 1942. The first time he had ever been in an airplane was when he was training to become a pilot. Baugh had his wings, and was ready to serve his country in the air war over Europe. 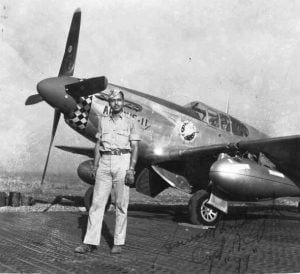 In July 1943, Baugh was assigned to the 99th Fighter Squadron. He flew a total of 135 combat missions in the P-40 and P-51 fighter aircraft during his 16 months in combat operations overseas. In honor of his wife, he painted the nose of his aircraft with “Connie Jean.”

On January 27, 1944, Baugh was part of a formation of 16 fighter aircraft of the 99th involved in a mission over the Anzio beachhead in Italy, part of the Battle of Anzio. Upon spotting 15 German FW-190’s, the group took down 10 of the enemy planes. Baugh was credited 1.5 aerial victories for the effort, taking down one himself and another along with his wingman.

After his time overseas, Baugh was assigned to Tuskegee Army Airfield in November of 1944 where he served as a flight instructor in the T-6 trainer and B-25 bomber and was further promoted to Director of Flying Training.

Their family grew, and the Baugh’s welcomed a total of three boys over the years, Howard Jr., David and Richard. Howard Baugh Jr. would follow in his father’s footsteps as a military aviator, getting his first flying lesson from his father.

After leaving the Air Force, Baugh went on to have a successful career with Eastman Kodak in Rochester, New York. Mr. and Mrs. Baugh eventually retired back in their hometown of Petersburg, where he gave of his time and talent speaking to and encouraging young people to understand the importance of education. He often spoke about his experience as a Tuskegee Airman, and that it was his good education that propelled his success in the military and in life.

“The most important message that I can give students is to stay in school, get the best education as they can so they can prepare themselves to get in a position to enjoy life,” he said in an interview several years ago.

In these years, Baugh was greatly admired for the service he had given to his country, as well as for his passion for helping others. He was known to be kind, generous and humble, and always eager to help. He shared his experiences to many groups and clubs, even speaking at prisons and traveling to Germany to speak with former war pilots who would have been his foes during the War. Along with three other original Tuskegee Airmen, Baugh was awarded the French Legion of Honor in 2004. He was inducted into the Virginia Aviation Hall of Fame in 2006.

In 2003, the Howard Baugh Chapter of the Tuskegee Airmen, Inc. organization in Petersburg was founded in his honor. His sons remain active in the organization, which is currently working towards erecting a statue in Baugh’s honor. The group has commissioned sculptor Joel Randell for the life-sized bronze statue, who Baugh had selected himself.  It is now on display at the Black History Museum & Cultural Center of Virginia.

When invited to the Pentagon in 2005 with other Tuskegee Airmen to meet with the secretary of defense, Baugh said, “Back in the ’40s and prior to that, the military services of the United States were the most racist and segregated segment of our society. Today, it is the most fair and integrated segment of our society. And the Armed Forces are leading the rest of society in acceptance and tolerance of diversity in our society.”

Howard Baugh passed away August 21, 2008, and rests at Arlington National Cemetery alongside his wife. His legacy will continue to inspire young people for generations to come. 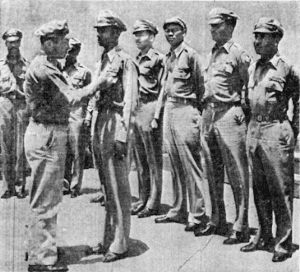