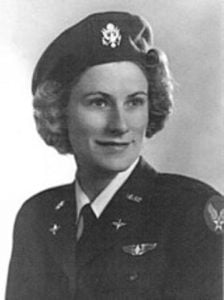 Iris Cummings Critchell started flying in 1939 and was the first woman to graduate USC’s Advanced Acrobatics course in 1940.

Iris Cumming Critchell’s lifetime achievements include swimming in the 1936 Berlin Olympic Games, reigning as the U.S. women’s 200-meter breaststroke champion from 1936 to 1939, serving in the Women’s Air Force Service Program (WASP) during World War II, winning the 1957 All Woman Transcontinental Air Race (fondly known as the Powder Puff Derby), being elected into the National Flight Instructors Hall of Fame in 2000, and being inducted into the Women in Aviation International Pioneer Hall of Fame in 2007. Critchell started flying in 1939 at Mines Field (now Los Angeles International Airport) and was a member of the first Civilian Pilot Training Program at the University of Southern California (USC), eventually becoming the first woman to graduate from the school’s advanced acrobatics course in 1940.

She was a member of the second class of women recruited by Jacqueline Cochran, founder of the WASP, for Army flight training in Houston. As 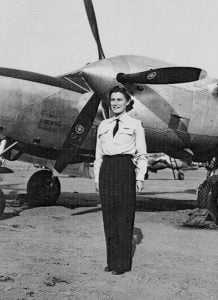 a member of WASP Class 43-2, Critchell earned her wings in May 1943 and was assigned to the 6th Ferrying Group at Long Beach, California. While at Long Beach, Critchell served as a civilian ferry pilot with the Air Transport Command Ferrying Division until the WASP were deactivated on 20 December, 1944. She flew 18 types of military aircraft as pilot in command, including the A-24, P-39, P-40, P-47, P-51, C-47, A-20, B-25, P-38, and P-61. Following her WASP service, Critchell went on to develop the first aviation curriculum for USC’s College of Aeronautics where she taught primary, instrument, commercial and instructor courses. In the late 1950s, Critchell helped develop a unique curriculum that showcased the airplane as an educational tool to broaden and enhance the education of young people beginning with junior high and high school.

In 1962, Critchell and her husband Howard established the Bates Foundation college-age program at Harvey Mudd College of Science and Engineering at the Claremont Colleges. Critchell served as Director of the Bates Aeronautics Program, and for 28 years, as Lecturer in Aeronautics on the college faculty. After retirement to Emeritus status, she continued some teaching and counseling until 1996. In addition to winning the Powder Puff Derby, she served on the race board nine years and on the Amelia Earhart Memorial Scholarship Committee for six years. She has been a FAA Designated Pilot Examiner for more than 20 years and was recently honored with the FAA Wright Brothers “Master Pilot” Award for “Fifty years of dedicated service, technical expertise, professionalism, and many other outstanding contributions that further the cause of Aviation Safety.”

Cummings was inducted into the National Flight Instructors Hall of Fame in 2000. She was awarded the Federal Aviation Administration’s Wright Brothers Master Pilot Award in 2006 for her dedication to airplane safety and the Nile Gold Medal of the Fédération Aéronautique Internationale in 2007 for her lifetime of dedication to aviation education. Since her official retirement, she has remained active on several faculty projects at Harvey Mudd College, in addition to working as a lecturer, consultant, and curator of the Aeronautical Library Special Collections at the college’s Sprague Library. She has been a member of the Ninety-Nines, an organization dedicated to the support of women pilots, since 1952

Be sure to listen to the Leaders and Legends: Women in Early Aviation interview with Iris Cummings Critchell by Keri Kittleson.